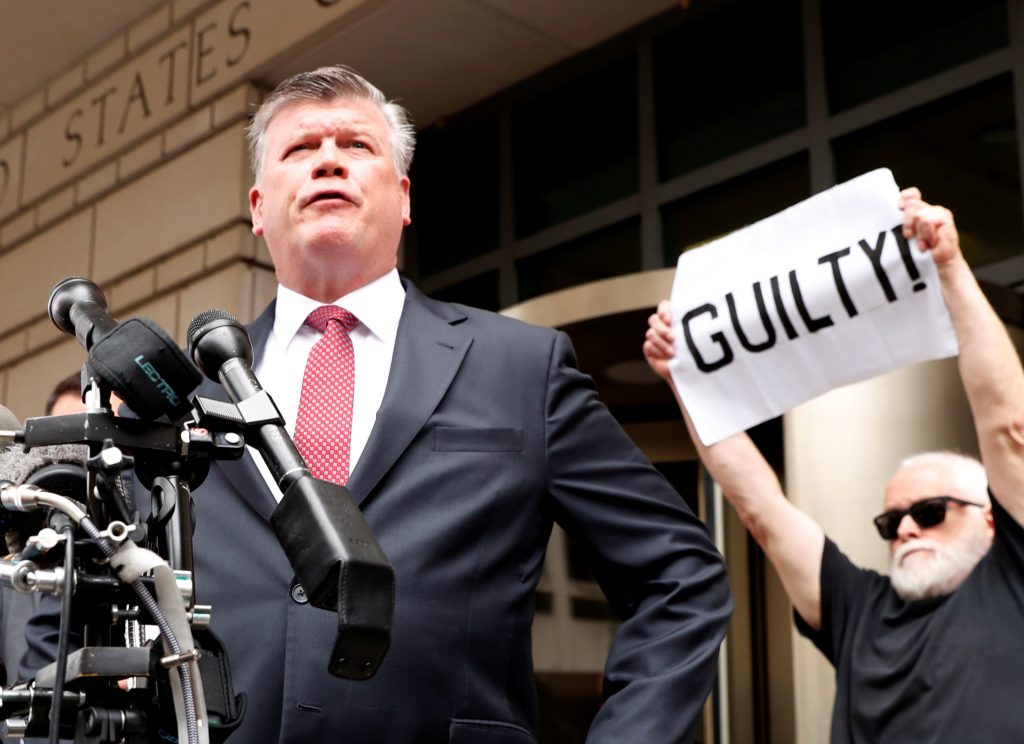 The move allows him to avoid a second criminal trial and ends Manafort’s more-than-yearlong fight against investigators in the Russia investigation.

Manafort was convicted last month of eight financial crimes in a separate trial in Virginia.

On Friday, prosecutor Andrew Weissman said in court that Manafort had struck a “cooperation agreement” and would plead guilty to charges related to his Ukrainian political-consulting work.

“He wanted to make sure that his family was able to remain safe and live a good life. He’s accepted responsibility. This is for conduct that dates back many years and everybody should remember that,” said Manafort’s attorney, Kevin Downing.

The charges do not relate to Russian interference in the 2016 presidential election, which is the central issue in the special counsel’s investigation into possible contacts between Trump’s campaign and Russia.

Still, Friday’s move gives Mueller another successful conviction while allowing Manafort to avoid facing another costly public trial that this time focused on allegations that he acted as an unregistered foreign agent for Ukrainian interests.

Mueller also gained a key cooperator in Manafort, who participated in a June 2016 Trump Tower meeting with a Russian lawyer that Donald Trump Jr. took despite it being described as part of a Russian government effort to aid his father’s campaign. A grand jury used by Mueller has heard testimony about the meeting.

White House press secretary Sarah Sanders said the Manafort case has nothing to do with Trump.

“This had absolutely nothing to do with the President or his victorious 2016 Presidential campaign. It is totally unrelated.”

“The president did nothing wrong,” said Rudy Giuliani, Trump’s attorney, in a statement. “Once again an investigation has concluded with a plea having nothing to do with President Trump or the Trump campaign.”

Under the terms of Friday’s plea deal, prosecutors dropped the bulk of the charges against Manafort, filing new paperwork that includes just two counts that resemble in many ways the original allegations made in an indictment last year.

The charges include conspiracy against the United States and conspiracy to obstruct justice.

It’s unclear how the possible deal might affect Manafort’s pursuit of a pardon from President Donald Trump. The president has signaled that he’s sympathetic to Manafort’s cause, and in comments to Politico, Giuliani said a plea without a cooperation agreement wouldn’t foreclose the possibility of a pardon.

Manafort has aggressively fought the charges against him and taken shots at his co-defendant, Rick Gates, who cut a deal with prosecutors earlier this year that included a cooperation agreement.

At the time of Gates’ plea, Manafort issued a statement saying he “had hoped and expected my business colleague would have had the strength to continue the battle to prove our innocence.” And during his Virginia trial in August, Manafort’s lawyers spent considerable time painting Gates as a liar, embezzler and turncoat who would say anything to get a lighter prison sentence.

Pleading guilty allows Manafort to avoid a trial that was expected to last at least three weeks and posed the potential of adding years onto the seven to 10 years he is already facing under federal sentencing guidelines from his conviction in Virginia. A jury found Manafort guilty of eight counts of tax evasion, failing to report foreign bank accounts and bank fraud. Jurors deadlocked on 10 other counts.

In the Washington case, prosecutors were set to lay out in great detail Manafort’s political consulting and lobbying work on behalf of former Ukrainian President Viktor Yanukovych and the pro-Russian Party of Regions.

Prosecutors say that Manafort directed a large-scale lobbying operation in the U.S. for Ukrainian interests without registering with the Justice Department as required by the federal Foreign Agents Registration Act, or FARA. Manafort was accused of concealing from the IRS tens of millions of dollars in proceeds from his Ukrainian patrons and conspiring to launder that money through offshore accounts in Cyprus and elsewhere.

Manafort had denied the allegations and pleaded not guilty. Even after his indictment last October, though, prosecutors say he continued to commit crimes by tampering with witnesses. The discovery of his witness contacts led to a superseding indictment in June and Manafort’s jailing ahead of his trial.

In addition to the witness-tampering counts, Manafort had been formally charged with acting as an unregistered foreign agent, conspiring to launder money and lying to the FBI and Justice Department about the nature of his work. Court papers indicated that he could have faced between 15 and 19 1/2 years in prison under federal guidelines.