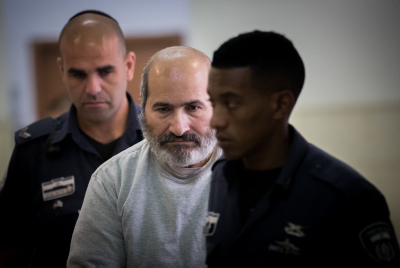 Ahad Tamimi, one of the two 17-year-olds who were documented kicking and slapping IDF soldiers, was released from prison Sunday, officials said. Tamimi, who was convicted of harassing the soldier, assault and other charges, served eight months in prison for the crime.

Tamimi and her cousin, Nur Tamimi, were arrested in December of last year after footage emerged of their cursing, kicking and slapping two IDF officers. The footage and images of the confrontation shocked Israelis. The army said that prior to the incident, soldiers had removed the residents of a house from where stones were being thrown on them, and did not allow the residents back inside. At that point, a large number of Palestinian girls and women emerged and began shouting epithets at the soldiers, “in an effort to create a provocation,” the army said in a statement.

The Temimis have a long history of terror and violence, Yisrael Hayom reported; altogether, the report said, the Temimi clan is responsible for the deaths of 55 Israelis in terror attacks over the years. In 1993, the father of Ahad Temimi was arrested on suspicion of having murdered two residents of Beit El, only to be released when it emerged that it was his cousin Nizar Temimi who was the culprit.

While in prison, he married Ahlam Temimi, the terrorist who was the mastermind behind the infamous bombing attack at the Sbarro pizza place in Yerushalayim in 2001, killing 15. In an interview with Makor Rishon, Nariman Temimi, one of her relatives, said that Ahlam was justified in carrying out that attack, as it was a “legitimate way to oppose the occupation.” Ahlam Temimi was released as part of the deal to free kidnapped IDF soldier Gilad Shalit.

Members of the family have participated in many demonstrations and riots, the report said, and one of the cousins, Bassam Temimi, is considered one of the Palestinian Authority’s biggest “experts” on “Jewish conspiracies” involving the kidnapping and slaughter of Arab children by Jews, etc. He is joined by brother-in-law Man’al Temimi, who is very active on social media, with his chief messages incitement against Israel and anti-Semitic messages.