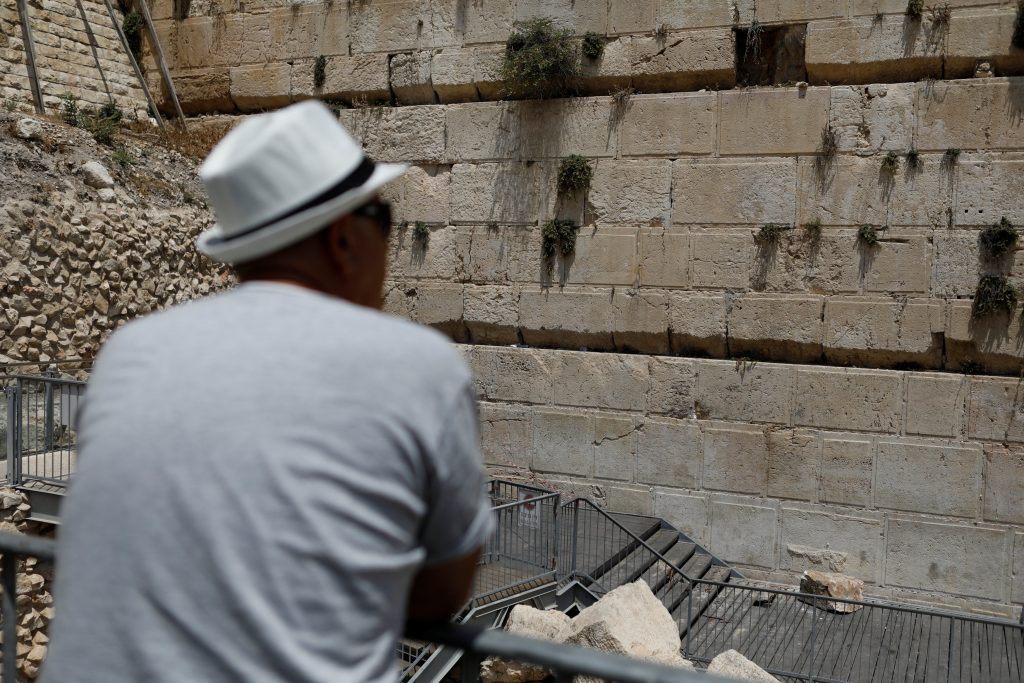 Culture and Sports Minister Miri Regev called an emergency meeting of the relevant governmental bodies to discuss safety conditions at the Kosel after a stone block weighing over 200 pounds fell from the Wall on Monday morning near a person praying there.

B’chasdei Shamayim, no was injured by the stone, which fell near Robinson’s Arch, south of the main prayer plaza, an area designated for egalitarian prayer.

“The falling stone is not an incident to be taken lightly — it was a miracle that no one was injured,” Regev said in a statement. “The incident raises complex questions. We are talking about human life, and the welfare of the public that visits the Western Wall every day.”

Representatives from the Israel Antiquities Authority, which works under the supervision of the Culture Ministry, the Yerushalayim municipality, the Western Wall Heritage Fund, and the chief rabbis of Israel, were summoned to ascertain what measures could be taken to ensure public safety.

Besides the question of safety, the halachic status of the stone was raised, since as a piece of the ancient Herodian structure, it possesses sanctity. Regev instructed the IAA to take possession of it until it is decided what to do with it.

“I didn’t hear or feel anything until it landed right at my feet,” said Daniella Goldberg, 79. She said she was praying at the site, when suddenly the boulder crashed down. She

Following the incident, a team of IAA experts, including archaeologists, engineers and conservationists, examined the area of the Kosel from which the stone came loose.

The IAA was not able to pinpoint a cause, but noted several possiblities, such as vegetation growing in the Wall’s cracks or entrapped moisture that may have eroded the stone.

“With the help of advanced technological methods, IAA experts will begin careful monitoring in the area of ​​the fall, as part of a survey of the entire area and the formulations of recommendations for the elimination of such danger,” said the IAA in a statement.

“The Israel Antiquities Authority is aware of the sensitivity required in handling this case and will work in cooperation with all the relevant bodies.”

Archaeologist Zachi Dvira, head of the Temple Mount Sifting Project, told The Times of Israel on Monday, after conducting his own inspection, that the whole area is a “danger zone.”

He noted multiple cracks in other stones and said he believes that it’s just a matter of time before another such incident occurs.

In the meantime, the City Engineer issued a Dangerous Buildings Order for the area, and a fence and signs were put up to keep visitors away, until decisions are made as to what measures, if any, are to be taken to ensure public safety.