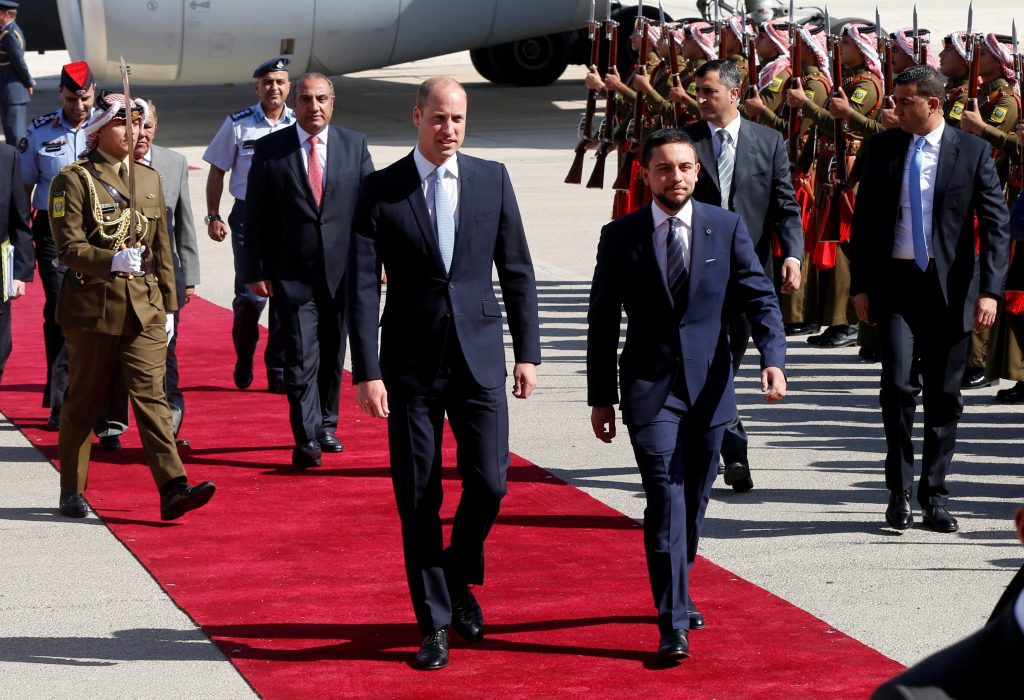 Britain’s Prince William on Sunday kicked off a politically delicate five-day tour of Jordan, Israel and the Palestinian territories, preparing to meet with young people, refugees and national leaders in a tumultuous region that Britain had controlled between the two world wars.

Though billed as non-political, it’s a high-profile foreign visit for the 36-year-old William, second in line to the British throne.

On Sunday, he was welcomed in Jordan by 23-year-old Crown Prince Hussein, a member of the Hashemite dynasty Britain helped install in then-Transjordan almost a century ago. William was greeted by an honor guard after his plane landed at a small airport on the outskirts of the capital, Amman.

In two days in the kingdom, he will visit a technology outreach group for young Jordanians, tour a vocational training college with links to Britain’s Middlesex University and meet Syrian refugee children.

On Monday evening, the prince leaves for Yerushalayim for the first-ever official visit by a member of the royal family to Israel and the Palestinian territories.

He’ll meet with Israeli Prime Minister Binyamin Netanyahu in Yerushalayim and Palestinian Authority President Mahmoud Abbas in Ramallah at a time of widening rifts between the two sides.

The Israeli-Palestinian conflict typically looms large, even during largely ceremonious visits, and William will have to maneuver carefully to avoid missteps.

Last week, an Israeli Cabinet minister complained about the royal itinerary’s reference to Yerushalayim as part of the “Occupied Palestinian Territories,” calling it a distortion of reality.

However, Israel has repeatedly invited members of the royal family to visit, and the event is welcomed.

Hanan Ashrawi, a senior official of the Palestine Liberation Organization, said she welcomes William’s visit as a chance to see Palestinian reality first hand. “This visit is the first of its kind and represents an opportunity to enhance relations between Prince William and the Palestinian people on all the levels,” she said.

The U.K. several months ago rebuffed Palestinian objections to a centennial celebration of the Balfour Declaration, and refused to make any apology for it.

William is visiting a region where three decades of British rule between the two world wars helped establish some of the fault lines of today’s Israeli-Palestinian conflict. Britain’s withdrawal from the region after World War II led to the eventual establishment of Israel and Jordan.

The second marriage of the late King Hussein was to a British citizen, Antoinette Gardiner, who took the title Princess Muna and is the mother of the current monarch, King Abdullah II. Hussein, Abdullah and Crown Prince Hussein all attended Sandhurst, the British military academy, as did William.

After Sunday’s airport arrival ceremony, the first stop for the prince is FabLab, an organization that offers young people a chance to explore technology and is backed by the Crown Prince Foundation. On Sunday evening, William is delivering a speech during a reception hosted by the British Embassy in Amman.

A sample of the potential for “missteps” was already on offer Sunday, with a report that Yad Vashem staff were shocked to learn that William’s itinerary does not included a visit to a tree planted to honor his great-grandmother who merited “righteous among the nations” status in 1994 for rescuing Jews in Nazi-occupied Athens.

Instead, he is expected to honor her memory by visiting her grave in a church in Yerushalayim.

“How is it possible that the prince is going to visit Yad Vashem and not visit the tree,” an anonymous source from Yad Vashem told The Jerusalem Post. “Is it for fear of upsetting the Arabs?”

The U.K. Embassy in Israel made no comment on the tree visit in a statement it issued:

“The Duke’s first engagement in Israel, on the morning of [June] 26, will see him visit Yad Vashem – Israel’s official memorial to the Jewish victims of the Holocaust. You will recall that The Duke and Duchess of Cambridge visited Stutthof concentration camp last year, as well as the Memorial to the Murdered Jews of Europe in Berlin – so this visit will be immensely poignant.”