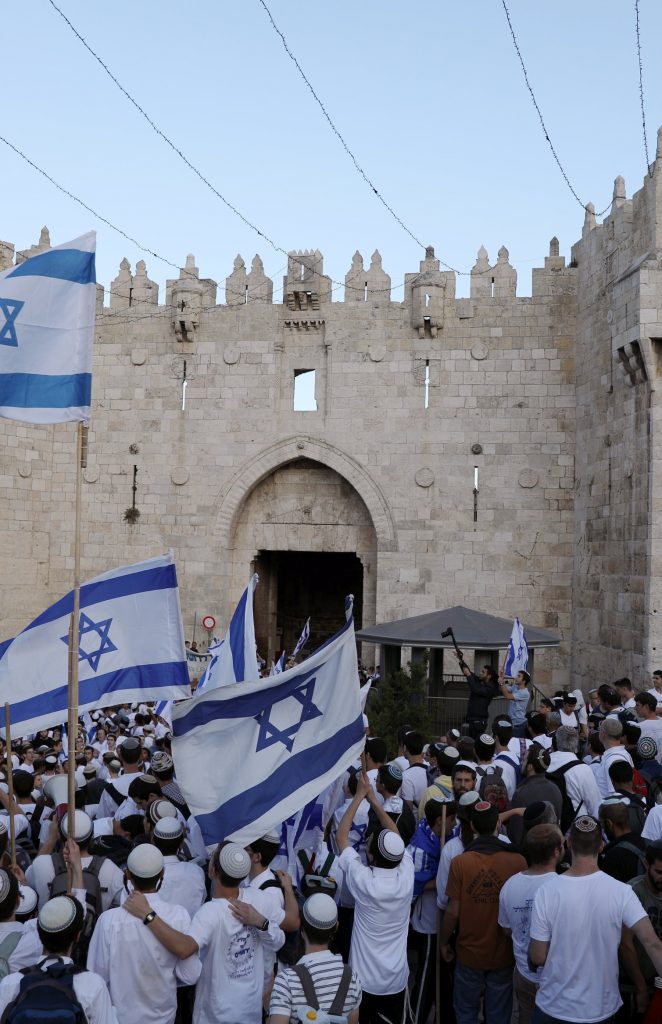 The so-called “Flag March” into the Old City to celebrate the reunification of Yerushalayim in 1967, passed without major incident on Sunday as thousands of Israelis made their to the Kosel through the Arab Quarter.

An estimated 45,000 marchers, mostly national-religious teenagers, converged on the Jaffa and Damascus Gates under heavy security. Some 1,750 police were deployed to secure the rally.

The marchers were confronted by Palestinians protesters at Damascus Gate, the entrance to the Arab part of the city, but b’chasdei shamayim, there was no violence.

As in past years, the marchers adorned themselves in the white and blue of the Israeli flag, singing and dancing from the city center to the Kosel.

An official ceremony was scheduled to be held at the Ammunition Hill war memorial site later on Sunday evening.

Major roads in the city were blocked between 3 p.m. and 11 p.m. due to the day’s events.

Earlier in the day, Jewish visitors to Har Habayis provoked an incident when they raised an Israeli flag at the site. Gedolei Yisroel have ruled that it is forbidden for Jews to enter Har Habayis in these times.

Sunday, Jews and Muslims clashed on the Temple Mount in the Old City, with police detaining Jewish visitors who had raised an Israeli flag.

Muslims chanted “Alla-hu Akbar” at the Jews, and police moved in to restore order, removing Jewish visitors from the area.

A police spokesperson confirmed that “a number of visitors were removed from the area” because they had not complied with the official guidelines for behavior during visits.

Jews are allowed to enter during limited hours, with police officers guiding them through a predetermined route and forbidding them from praying, displaying religious symbols or raising the Israeli flag.