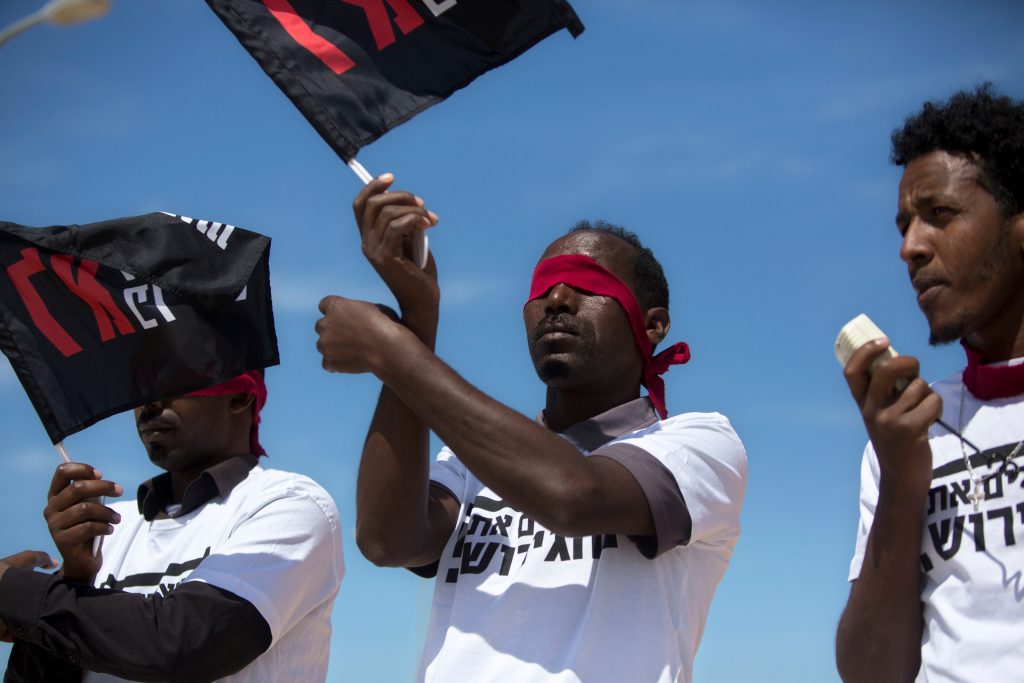 Israeli Prime Minister Binyamin Netanyahu said on Monday he was suspending a new agreement with the U.N. refugee agency to relocate thousands of African migrants, as right-wing pressure mounted on him to scrap the deal.

Hours after announcing the new arrangement, which would also give thousands of other migrants the right to stay in Israel, Netanyahu posted a message on social media saying he was putting its implementation on hold until further review.

The fate of some 37,000 Africans in Israel has posed a moral dilemma for a state founded as a haven for Jews from persecution and a national home. The right-wing government has been under pressure from its nationalist voter base to expel the migrants.

According to the agreement, about 16,250 of about 37,000 African migrants, most of them from Eritrea and Sudan, would be relocated to Western nations while others would be allowed to stay in Israel.

At a news conference in Yerushalayim, Netanyahu praised the new agreement reached with the U.N. Refugee Agency (UNHCR). But in the hours that followed the announcement, he faced growing calls on social and mainstream media to abolish the deal.

Some Israelis accused him of caving to left-wing pressure and betraying the residents of south Tel Aviv, a poor part of the city that has attracted the largest migrant community, changing its ethnic makeup and enraging some of its inhabitants who want the migrants out.

“I am attentive to you, especially to the residents of south Tel Aviv,” Netanyahu said on social media, adding that he planned to meet with local representatives on Tuesday.

“In the meantime I am suspending the agreement’s implementation and after I meet with the representatives I will bring it forward for further review.”

Implementing the signed agreement was expected to take five years.

Netanyahu’s backtrack was largely seen in Israel as an attempt to appease his voter base and keep its support at a time of political uncertainty.

The four-term prime minister faces one of the greatest challenges to his career yet, as he is under police investigation in three different corruption cases. Netanyahu denies any wrongdoing.

Naftali Bennett, leader of the far-right party Jewish Home, a key member of Netanyahu’s coalition government and a competitor for Israel’s right-wing votes, said on Twitter that the agreement would encourage more people to enter the country illegally, and called on Netanyahu to overturn it.

His calls were soon echoed by members of Netanyahu’s own Likud party.

The UNHCR had confirmed in a statement that an agreement was signed with Israel, but did not name the countries that would accept the migrants.

It said it would “facilitate the departure to third countries to be determined of some 16,000 Eritreans and Sudanese under various programmes, including sponsorship, resettlement, family reunion and labour migration schemes, while others will be receiving a suitable legal status in Israel.”

Netanyahu named Germany, Italy and Canada as examples of countries that would accept the migrants, though German and Italian officials said they had no knowledge of any such agreement.

Canada has an arrangement with Israeli authorities to suspend the deportation of individuals who have private sponsorship applications with Canada until they are processed, said Hursh Jaswal, spokesman for Canada’s immigration minister.

There were 1,845 applications being processed at the end of last year, Jaswal said.

A previous plan already underway for a mass deportation of some 20,000 migrants to Rwanda had led to legal challenges in Israel, drawn criticism abroad and triggered an emotional public debate among Israelis.

In February, Israeli authorities started handing out notices to male African migrants giving them two months to leave for a third country in Africa or risk being put in jail indefinitely.

At immigration hearings, migrants were told they could choose to go to Rwanda or Uganda. Both countries have denied having any deal in place with Israel.

The U.N.’s refugee agency had urged Israel to reconsider its deportation plan, saying migrants who have relocated to sub-Saharan Africa in the past few years were unsafe and ended up on the perilous migrant trail to Europe, some suffering abuse, torture and even dying on the way.

Rights groups had challenged the deportation in Israel’s High Court, which on March 15 issued a temporary order that froze its implementation.

Netanyahu said on social media that Rwanda had in the past few weeks folded to immense pressure and backed out of the deal it had made with Israel to accept expelled migrants, prompting him to seek the new arrangement with the UNHCR.

Since 2005, a total of 64,000 Africans had entered Israel illegally over its border with Egypt, although thousands have since left. A fence Israel has built over the past few years along the frontier has largely stemmed the flow.