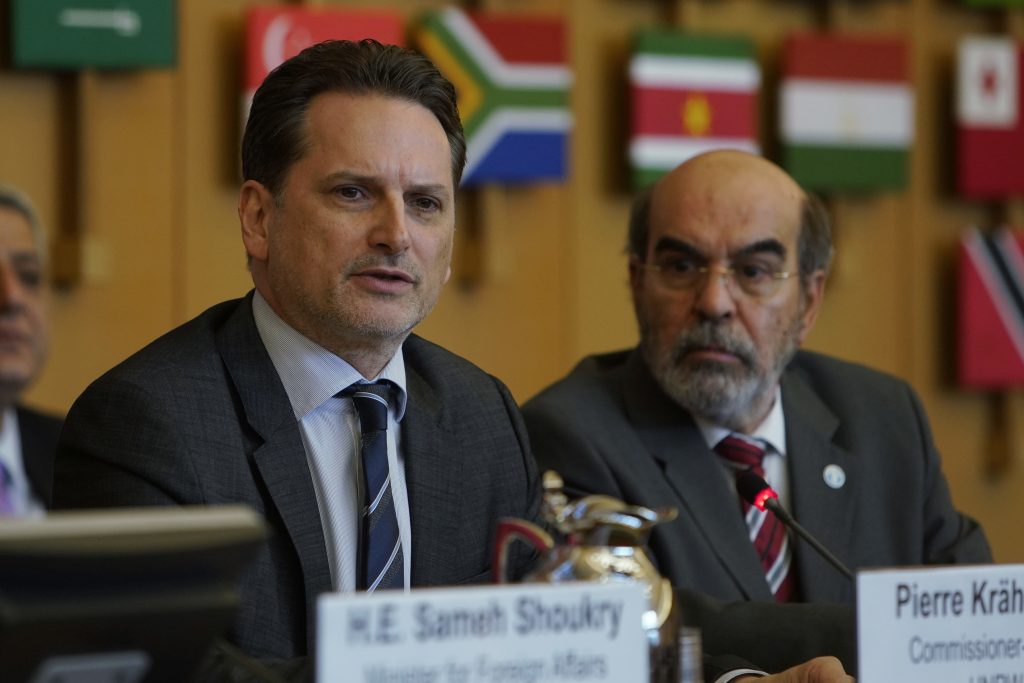 The United Nations received pledges Thursday of nearly $100 million in new funding for the U.N. relief agency for Palestinians after the U.S. slashed its aid, but it is still facing a nearly $350 million shortfall this year.

U.N. Secretary-General Antonio Guterres said “an important first step was reached” at an emergency donor conference in Rome with the new pledges. But he said “a long way is in front of us” to fully fund the agency, which went into the conference facing a $446 million gap in financing this year — the worst funding crisis in its 68-year history.

“If UNRWA would not exist, if these services were not provided, the security of region would be severely undermined,” Guterres told reporters at the conference’s conclusion. “Now it is very clear, it is absolutely essential, that the extraordinary unanimity in political support to UNRWA and its activities translates itself into cash.”

The agency, the oldest and largest U.N. relief program in the Middle East, provides health care, education and social services to an estimated 5 million Palestinians in the West Bank, Gaza Strip, Jordan, Syria and Lebanon. They are the refugees or descendants of the few hundred thousand Palestinians who either fled or were forced from their homes during the war that led to Israel’s establishment in 1948.

Guterres told the conference that cutting sanitation, health care and medical services in already poverty-wracked and conflict-ridden areas “would have severe impact — a cascade of problems that could push the suffering in disastrous and unpredictable directions.”

The Trump administration announced in January it was slashing $65 million this year. But the agency said the actual cut was around $300 million because the U.S. had led the agency to believe it would provide $365 million in 2018.

The U.S. had been UNWRA’s largest donor, supplying nearly 30 percent of its budget. In announcing the cuts in January, the U.S. State Department said it wanted reforms at the agency, which Israel has strongly criticized.

Egyptian Foreign Minister Sameh Shoukry, who along with his counterparts from Jordan and Sweden cohosted the meeting, said the agency had already undertaken reform measures to streamline and rationalize its activities. But he said “there is a limit to its ability to do so” given the enormous sustained needs faced by 5 million people.

“It is vital and it is necessary to address these very basic services, but also to provide dignity for multitudes of Palestinians and to (protect) many of them from the potential threats of radicalization and terrorism,” he told reporters.

The agency’s chief, Pierre Kraehenbuel, said expectations in the region were high that donors would step up.

“The message to the Palestinian refugees has to be that they are not forgotten,” he said.