Israel Police Give Recommendation to AG, Netanyahu Fires Back
Israel 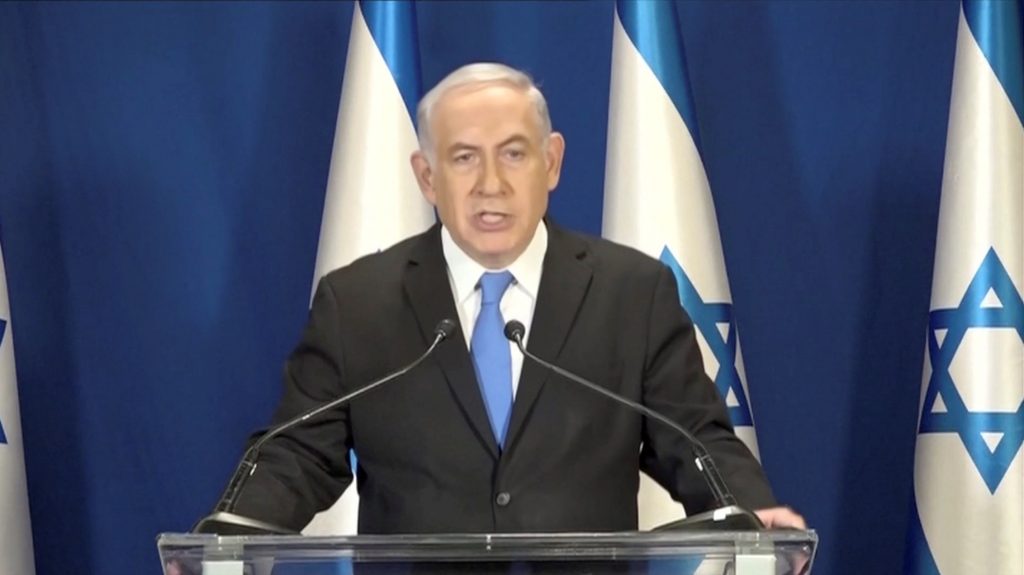 Shortly after being informed that police are recommending he be indicted for bribery and breach of trust, Prime Minister Binyamin Netanyahu fired back at the police Tuesday night, charging that the 14-months-long investigation of him and his family have amounted to a campaign of slander and that nothing will come of it.

In a special broadcast to the nation, PM Netanyahu did more than reiterate his claim of innocence. He alleged that the 15 investigations conducted against him while in office were designed to “topple him from power.”

“They have brutally attacked my wife and children to hurt me,” he said. “This time things will end without anything. These recommendations have no place in a democratic state.”

Brushing aside demands for his resignation, the prime minister pledged, “I will continue to lead the state of Israel responsibly and loyally as long as you, the citizens of Israel, choose me to lead you,” an ashen-faced Netanyahu said. “I am sure that the truth will come to light. And I am sure that also in the next election that will take place on time I will win your trust again, with G-d’s help.”

Addressing the oft-published allegation that he accepted expensive cigars and other gifts from billionaire friend Arnon Milchan in return for favors, he insisted that he has acted solely in the national interest:

“[I do these things] not for cigars and not for a headline, and not for anything else other then what is good for the state of Israel. This is what I did up until now and what I will continue to do.”

Yesh Atid leader Yair Lapid was revealed to be a key witness against PM Netanyahu. According to Hadashot news, Lapid was a witness in Case 1000, an alleged illicit deal involving bribery made between PM Netanyahu and Milchan. This may have been the “surprise” that Chief of Police Ron Alsh ich promised earlier in the week.

Along with PM Netanyahu, the publisher of Yedioth Ahronoth, Arnon Mozes, was recommended to be indicted for bribery in Case 2000, which involves a suspected illicit quid-pro-quo between PM Netanyahu and Mozes that would have seen the prime minister weaken a rival daily, the Sheldon Adelson-backed Yisrael Hayom, in return for less critical coverage from Yedioth.

In their recommendations on Tuesday, the police rejected as implausible the explanation given that the gifts from Milchan and Australian businessman James Packer were merely tokens of friendship.

“Among friends there is a motif of mutuality,” which they asserted was missing in this case.

“One receives gifts, not demands,” the police said, and referred to testimony they had gathered that “there was a demand (by the Netanyahus) to receive the goods in a systematic and covert manner.”

“With Netanyahu’s election in 2009, the volume of goods increased significantly, and the goods were given in light of Netanyahu’s becoming prime minister and minister of Communications, and to promote Milchan’s business, interests and status,” the police alleged.

In some instances, police said, “things were done contrary to the interests of the state.”

Bribery was charged in both cases, which was reported with surprise in the Israeli media, which had thought there would only be one count of bribery, the most serious of financial corruption offenses.

According to media reports, Lapid is prepared to testify that PM Netanyahu pushed for a law to give his wealthy friends millions of dollars in tax breaks.

He later issued a statement calling on Netanyahu to resign.

“In a functioning country, a person against whom there are such serious accusations, most of which are not denied, cannot continue to serve as prime minister in charge of the security and well-being of Israeli citizens. There is no way to run a country while you are fighting such serious suspicions,” he said.

He acknowledged providing testimony in the case.

“Following the investigation of Case 1000, the police approached me and asked me to give testimony about my period at the Ministry of Finance. Like any law-abiding citizen in the state of Israel, I provided them with brief testimony regarding the attempt to expand the ‘Milchan Law’ to 20 years. I will emphasize, that despite all the pressures, I refused to pass that law,” Lapid said.

In a statement, Health Minister Rabbi Yaakov Litzman said that “MK Lapid was exposed tonight in his public disgrace, as even now he continues the attempt at a ‘putsch’ against the prime minister, which he already attempted to lead in 2014, for which he was in fact removed from his failed position in the Treasury.

“I strengthen the hands of Prime Minister Netanyahu, believe in his innocence and wish the government that, with Hashem’s help, it completes its term according to law for the benefit of the citizens of Israel,” Rabbi Litzman stressed.

“I am conscious of the public’s feelings, on both the right and the left, regarding the police recommendations with respect to the investigations of the prime minister,” Kachlon said in a statement. “The law establishes that only the attorney general is qualified to make a decision with regard to filing or not filing an indictment. Until then, I will continue to lead and navigate the Israeli economy for the benefit of all Israeli citizens.

“I call upon everyone — on the right and the left — to refrain from the attacks on the police and on the system of the rule of law. The entities involved should be allowed to operate without pressure, from neither the right or the left, and to act in an orderly, professional and prudent manner,” he added.

However, it is far from clear that PM Netanyahu will go to jail. As he noted in his statement on Tuesday night, the police indict no one, they can only recommend. It is the attorney general, in this case Avichai Mandelblit, who will review the evidence and decide whether it is sufficient to file an indictment. Mandelblit said recently that the process would take several months.

In the coming days, the prosecutors are expected to disclose more details of the case against PM Netanyahu, Milchan and Mozes.

Coalition chairman David Amsalem (Likud) rejected the police recommendation for indictments as a politically motivated effort to oust him from office.

“This is nothing new. The target was marked two years ago. They have fired dozens of arrows at him in the hope that one of them will hit it, and after they have turned over every stone, in every corner of the world, the police did everything in order to reach their goal,” Amsalem said.

“According to my understanding, we are talking about an illegitimate process that endangers every democratic country in the world,” he continued. “In a democratic country, the government is overturned at the ballot box and not by the army or the police.”

Following a High Court decision on Monday allowing their conclusions to be made public, a police source told The Times of Israel that “if and when” indictment is recommended to Attorney General Mandelblit, “a short and concise statement will be released to the press informing them of the conclusions based on the evidence collected.”

The source said that publishing a press release is “the practice with all investigations of public figures.”

PM Netanyahu, who was reportedly conferring with his lawyers on Tuesday, has maintained his innocence of any wrongdoing throughout the year-long investigations.