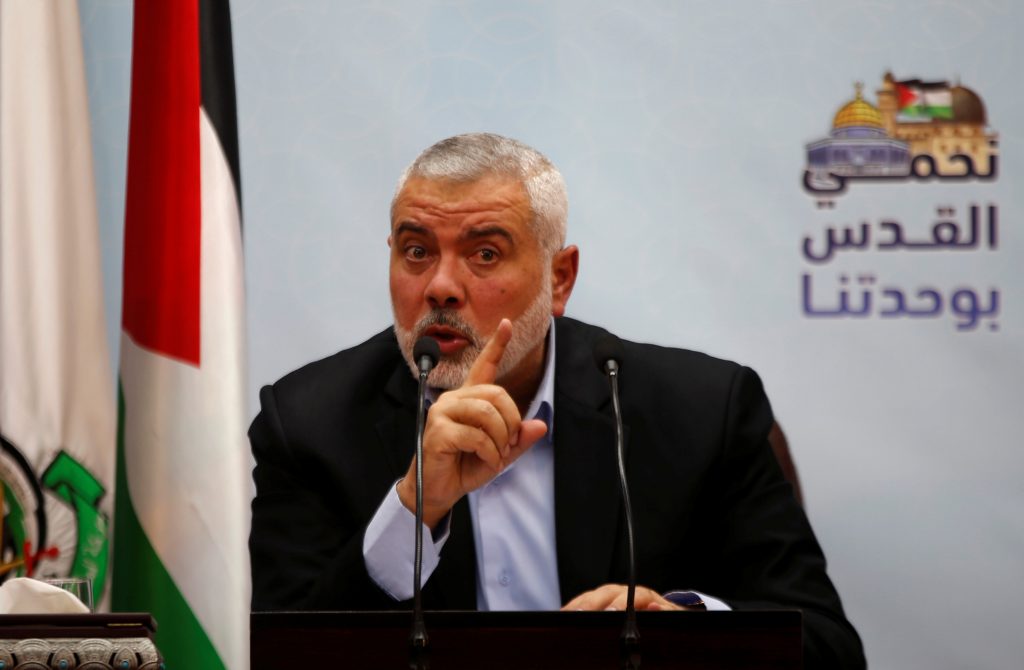 The U.S. State Department said on Wednesday it had designated Hamas politburo chief Ismail Haniyeh as a terrorist.

The State Department said in a statement that Haniyeh, along with two Islamist groups active in Egypt and one in the Palestinian territories, were listed as specially designated global terrorists.

It quoted Secretary of State Rex Tillerson as saying the designations “target key terrorist groups and leaders — including two sponsored and directed by Iran — who are threatening the stability of the Middle East, undermining the peace process, and attacking our allies Egypt and Israel.”

Israel’s Intelligence Minister Yisrael Katz tweeted in response: “I wish to congratulate the US on the righteous decision to designate Ismail Haniyeh as a global terrorist. This man is one of the main reasons the citizens of the Gaza strip are suffering since the terror organization Hamas took power of the Strip in 2007.”

Secretary of State Rex Tillerson was quoted in the Department statement as saying the designations “target key terrorist groups and leaders – including two sponsored and directed by Iran – who are threatening the stability of the Middle East, undermining the peace process, and attacking our allies Egypt and Israel.”

Ambassador Nathan A. Sales, the Coordinator for Counterterrorism, told The Jerusalem Post that “Ismail Haniyeh has been involved in Hamas” campaign of terrorism against Israel for years and even decades. The United States is not fooled by any attempt by Hamas to rebrand itself. We know it for what it is, a terror organization committed to the destruction of the State of Israel.”

“All assets belonging to Haniyeh under U.S. jurisdiction will be frozen,” Sales added. “This designation allows us to dry up the sources of funding and kick them out of the international financial system. We don’t want to only stop the bomber, but the person who buys the bombs.”

The three groups designated by the State Department are:

– Harakat al-Sabireen, which the statement said is backed by Iran, operates primarily in Gaza and Yehudah and Shomron, and fired rockets into Israel;

– Liwa al-Thawra, which it said has claimed responsibility for killing an Egyptian army general in Cairo in 2016 and a bombing in 2017;

– Harakat Sawa’d Misr (HASM), which it said claimed responsibility for killing an Egyptian security officer and other attacks.