Israel Pence, in Yerushalayim, Says Honored to Be in ‘Israel’s Capital’
Israel 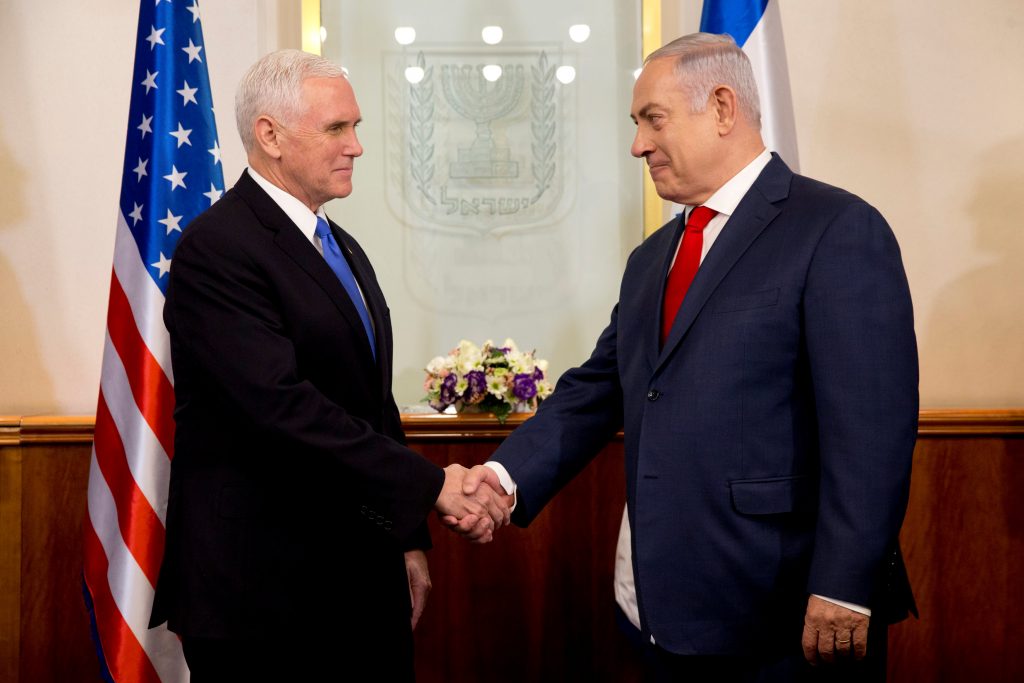 At the conclusion of a private meeting Monday morning with Prime Minister Binyamin Netanyahu, U.S. Vice-President Mike Pence said that he hoped his visit to Israel and the region would herald “the dawn of a new day,” in which Israel and the Palestinians would negotiate in order “to achieve a peaceful solution to the decades of dispute” between them. By recognizing Yerushayalim as Israel’s capital, U.S. President Donald Trump “is convinced” that the two sides will be able “to move negotiations forward.”

The meeting with Netanyahu was Pence’s first official activity on the first official day of his visit to Israel. Pence arrived in Israel Sunday night, getting the red-carpet treatment as he was received by top officials, including U.S. Ambassador to Israel David Friedman, Israel Ambassador to the U.S. Ron Dermer and Tourism Minister Yariv Levin (Likud). Levin welcomed Pence in remarks at Ben Gurion airport, saying that Israel “appreciates and thanks you for the important role you played” in the Trump declaration on Yerushalayim.

In his own remarks after the meeting, Netanyahu said that over the years he had met hundreds of world leaders in Yerushalayim, but that this was the first time “that I can say we are in the capital of Israel, Yerushalayim. I wish to thank President Trump and yourself for the historic declaration of Yerushalayim as Israel’s capital.”  The move, Netanyahu said, “will provide opportunities to move ahead” in negotiations with the Palestinians.

By contrast, Palestinians welcomed Pence with protests and the burning of photos of the vice president. At a demonstration outside the Old City Sunday night – one of many that took place in PA cities as well – Arabs were seen setting fire to photos of Pence, and defacing his image with shoe prints.

Pence will not be meeting with Palestinian Authority officials, who have declined to host Pence in Ramallah over the recent announcement by President Donald Trump that the U.S. recognizes Yerushalayim as Israel’s capital. The PA will strike on Tuesday, with all stores, businesses and schools closed, as mass rallies against VP Pence and the U.S. position are held.

After his meeting with PM Netanyahu, the vice president will speak at the Knesset Monday afternoon. He will later attend a formal state dinner at the Prime Minister’s Residence on Monday night. On Tuesday, Pence will meet with President Reuven Rivlin, and later visit Yad Vashem and then the Kosel. He is set to leave on his way back to Washington on Tuesday.