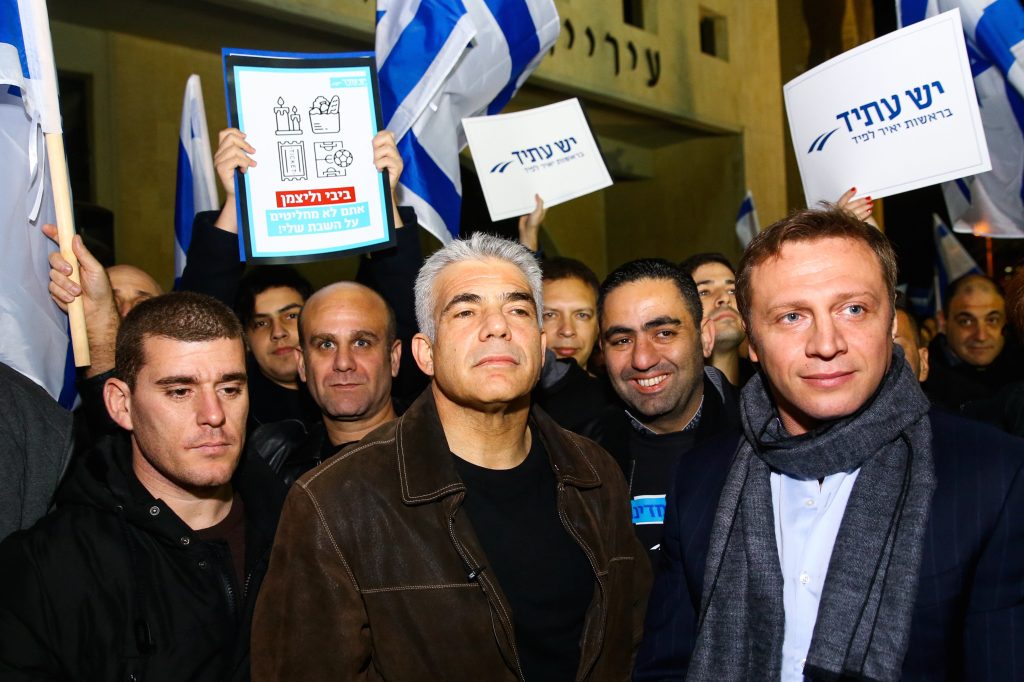 Defense Minister Avigdor Liberman raised the ire of observant Jews after he publicly violated Shabbos to attend a demonstration in Ashdod against the Supermarkets Law, demanding that stores be allowed to operate freely on Shabbos. Liberman visited stores in a shopping center that were open. Ashdod has been enforcing laws against operating on Shabbos, and thousands of demonstrators gathered on Motzoei Shabbos against the municipality.

In response to the visit by Liberman, Interior Minister Rabbi Aryeh Deri was quoted as telling supporters Motzoei Shabbos that he was “finished with Liberman. Liberman violated Shabbos openly, crossing all lines. Even Yair Lapid’s father Yosef [Tommy] Lapid, one of the biggest haters of religion, would never have done something like this. There are things that go beyond any personal relationship.” Yair Lapid himself spoke at the Motzoei Shabbos demonstration, demanding that the Supermarkets Law be repealed.

On his visit to the city, Liberman said that “anyone who says that the Supermarkets Law will not have an impact on society is misleading you. We can see the influence of the law in Ashdod. Until recently there was harmony in Ashdod” because the municipality allowed businesses outside the city center to operate on Shabbos, but because the city is now enforcing laws requiring businesses to close on Shabbos throughout the city, “the harmony in Ashdod has been violated. I hope we do not see this in other cities.”

Liberman also reacted to a recent storm of criticism, in which several Rabbis related to the Religious Zionist movement, as well as Chief Sephardic Rabbi Harav Yitzchak Yosef, criticized the IDF for encouraging mixed male and female service in combat units. “I heard recently that Rabbi Shmuel Eliyahu of Tzfas demands that IDF Chief of Staff Gadi Eisenkott resign” as the chief proponent of mixed combat unit service, and “Rabbi Shlomo Aviner of Beit El recommends that young people skip IDF service altogether because there are no male-only combat units. And I heard that the Chief Rabbi supports these views.”

“This is unacceptable,” Liberman said. “Women were always a part of the IDF, and these comments have no legitimacy. I have handed down orders that neither Rabbi Aviner nor the Rabbi of Tzfas be allowed to participate in IDF events. They need to calm down and learn to respect everyone. The Chief Rabbi and Rabbi Aviner cannot be part of official IDF ceremonies if they demand the resignation of the Chief of Staff or tell youth not to enlist. I will not allow them a platform in the army until they retract their comments. These are state workers who get their salaries from the taxpayers,” and as a result have no right to criticize decisions made by state institutions like the IDF.

In a statement, the office of Rabbi Eliyahu said that Liberman had no right to prevent him from attending IDF events he was invited to based on his opinion of women’s army service. “Liberman is inciting and lying. Only in the most dictatorial countries is it prohibited to criticize the army. If Liberman does not apologize and retract his orders, he will have to deal with a lawsuit over his lies.”