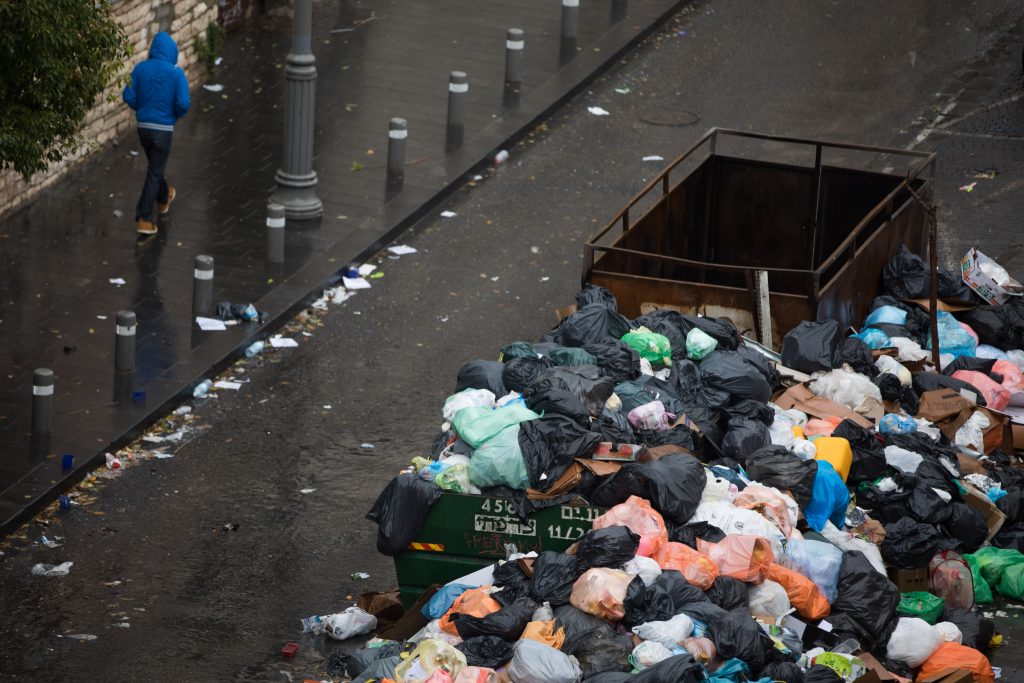 Yerushalayim was on strike Sunday, with all municipal services – except for education – shut down, as the ongoing feud between the municipality and the government advanced another stage. Trash will not be picked up and parking rules will not be enforced. All city services are shut down, including information and assistance phone numbers, which will not be answered. Also on strike are municipal security services, and as a result, an event that had been set for Sunday night at the Arena Stadium will not take place.

The strike was called Thursday night by the Histadrut in response to threats by Mayor Nir Barkat to fire 2,150 municipal employees, which he says the city can no longer afford. Already then sanitation workers walked off the job, which explained the huge piles of trash that were noticeable in the Machaneh Yehuda open-air market Friday – which, after the pre-Shabbos rush and the heavy rainfall over the weekend, was an even bigger mess Sunday. Several workers have already received dismissal notices, and they barricaded themselves outside the offices of municipal officials Thursday, preventing the officials from leaving.

The root of the issue is the ongoing debate between the city and the government on increasing the “Jerusalem Grant,” a special payment due the city for its status as the nation’s capital and its increased security needs. In 2017, the grant was raised to NIS 700 million, NIS 200 million more than in 2016 – but with increasing costs, Barkat has said that further increases are necessary.

Finance Minister Moshe Kahlon has been very reluctant to approve those increases; last year, it took a mini-strike to bring both sides to the table and negotiate a deal, and the likelihood of his capitulating again is considered low, Hadashot News said. Barkat says that the city needs NIS 1.2 billion, and claimed that without it, the city cannot afford to continue operations. “At a time when Yerushalayim’s enemies seek to weaken its standing, we expect the Treasury to stand by our side and provide us with the necessary assistance, and not with excuses,” Barkat said when he called the 2017 strike. “Yerushalayim needs the budget that was agreed to, and we should not be forced to have to beg.”

In recent weeks, Barkat has personally paid for billboards and newspaper ads condemning Kahlon and his refusal to increase the grant. Last week, sanitation workers took trash gathered from bins and dumped it in front of the Finance Ministry, in a protest action Ministry officials said was orchestrated by Barkat. “Barkat is acting in a very vulgar manner,” Ministry officials told Yediot Acharonot. “Not only are they not collecting trash, they are using it as a weapon to further pollute the city. It’s absolutely disgusting.”