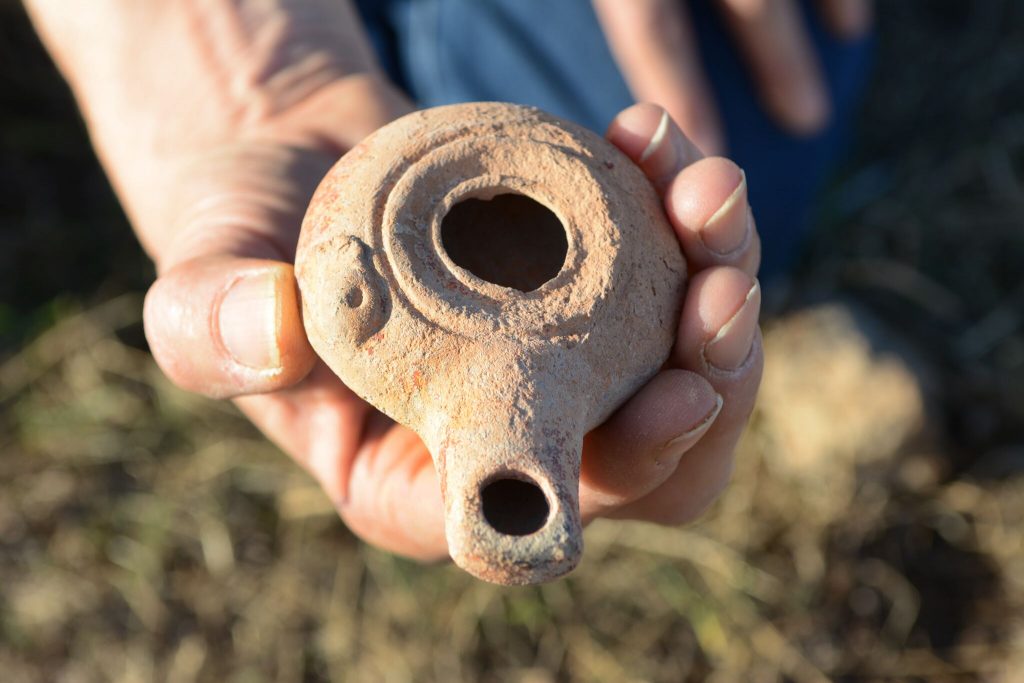 Just in time for Chanukah, a pottery vessel archeologists believe dates to the historic period of the Chanukah events was discovered in the Beit Shean Valley.

The clay oil lamp was stumbled upon by Ayelet Goldberg-Keidar and her daughter Hadas, residents of Kibbutz Beit Alfa, while on a stroll in the area about a week ago.

Seven-year-old Hadas picked up the vessel and her mother – who happens to be an archaeology student at Haifa University – realized right away that the lamp could well have historic value.

“Guessing that this was connected to antiquity theft, I hurried to get in touch with the theft prevention unit at the Israel Antiquity Authorities (IAA),” said Ms. Goldberg-Keider.

“Innocent porcupines, digging out their den for the winter, are responsible for the excavation of this intact lamp,” said Distelfeld. “Porcupines prefer archaeological sites because the earth is less packed due to man’s activities in the past.”

The judgment of Dr. Einat Ambar-Armon, an expert in clay lamps, was that it came from the Chashmona’im period.

“The lamp is typical of the Hellenistic period, which began in the 2nd century BCE, the historical period that is known to all of us as the Maccabean Wars against the Greeks,” said Ambar-Armon, the IAA’s regional head of education and community outreach.

During this period, said Ambar-Armon, such lamps were produced from molds: the top and bottom pieces were constructed separately and then connected in a new technique that allowed for their mass production, which she attributes to western-influenced innovation.

The IAA announced it will present the Goldberg-Keidar family with a certificate of appreciation for good citizenship in bringing the find to their attention and donating the lamp to the IAA.