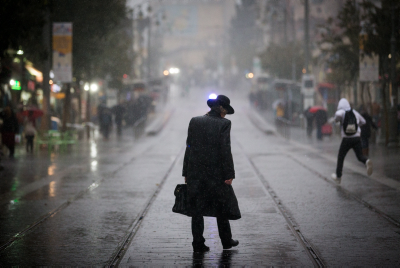 It’s mid-December, and other than a couple of days with heavy rains, there has yet to be a sustained period of precipitation in Israel this winter – and a seasonal forecast released Monday by the Israel Meteorological Service said that this situation could continue to prevail throughout the winter. According to the forecast, the country has a 64.7 percent chance of experiencing a winter with less than average rainfall – which would make this year the fifth in a row of insufficient rain.

November was dry as well, and already then, the Meteorological Service said, its forecasts gave a 50-50 chance for a dry winter. With the passage of the first half of December without sufficient rainfall, the chances of a dry winter have increased, the Service said Monday.

With that, forecasters were hopeful that they might be wrong. The current forecast model, said Dr. Yoav Levy, development and forecast manager of the Service, showed the possibility of heavier rainfall at the end of February and throughout March. With that, he said, a couple of good soakings in January and February could turn things around during those months as well. “In truth, the models we can generate for our region are not always good enough to give an accurate picture of what will really happen. We generate these forecasts in order to enable people and businesses to prepare for the possibility that a certain meteorological climate will prevail.”

As to why there was likely to be a rain shortfall this year – as there has been in recent years – Levy said that although all the evidence was not in, global warming could not be ruled out. “When you look at the statistics for the past 30 years, you see that the long-term climate data show a steady increase in temperature, resulting in less moisture and thus less rainfall in the area of the Mediterranean. This is an amazing statistic,” he added.

In light of the fact that not much rain has fallen yet this year, the Rabbanim have called upon the public to daven for rain.