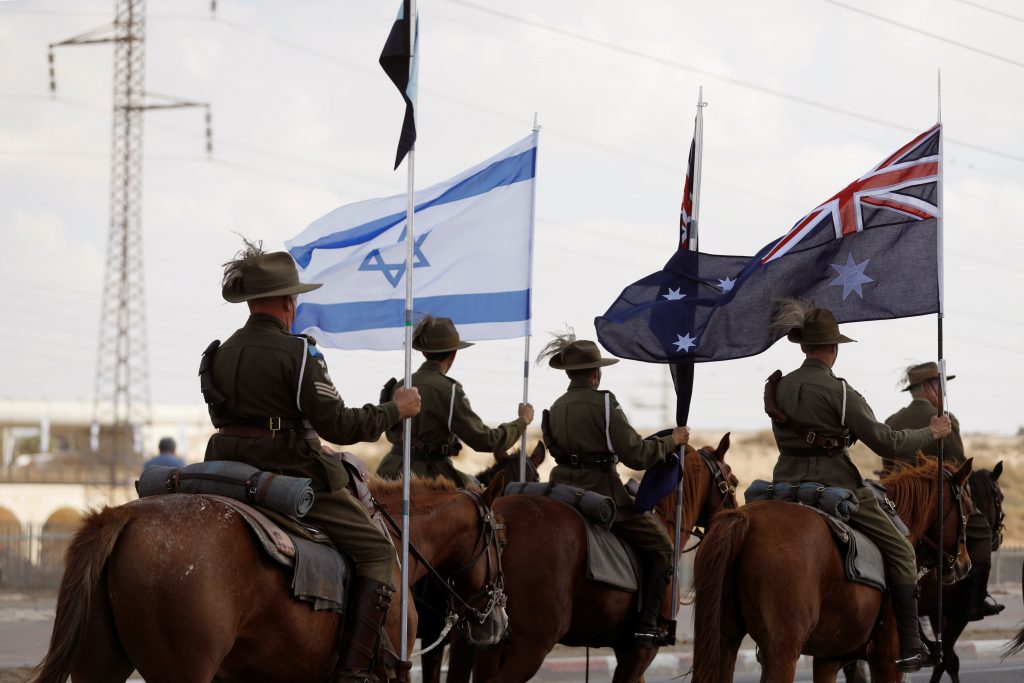 A century to the day after Australian troops broke through Ottoman defenses in a daring First World War victory, nearly 200 horsemen — including descendants of the soldiers who fought that day — paraded Tuesday through the streets of a southern Israeli city in a memorial to those killed in a battle that helped turn the tide of the war and shape the modern Middle East.

With leaders from Israel, Australia and New Zealand in attendance, Australian and Israeli military marching bands led the way through the flag-festooned route in Be’er Sheva, flanked by several thousand onlookers in a tribute to the 171 British troops killed that day.

Some 175 members of the Australian Light Horse Association were participating, including descendants of the original troops. Ian Dunlop, an Australian military veteran whose grandfather fought at Be’er Sheva, bore his ancestor’s four military medals on his chest and said he was “very proud” to have come from his native Melbourne.

The battle was a crucial, if largely forgotten, victory in the Mideast campaign that enabled the Allies to break the Turkish line in what is now southern Israel and to capture Jerusalem weeks later. The victorious campaign redrew the map of the Middle East.

In the fall of 1917, Allied forces with General Sir Edmund Allenby’s Egyptian Expeditionary Force advanced on Gaza as part of a campaign to knock the Ottoman Empire, Germany’s ally, out of the war. To outflank the Turkish troops entrenched around Gaza, a parched detachment made a desperate maneuver through the Negev Desert to capture the strategic town of Be’er Sheva, known both in antiquity and in modern times for its wells.

On October 31, 1917, Allied troops launched their assault, but by late in the day, the critical water sources remained in Turkish hands. In a desperate gambit, mounted infantrymen with the Australian and New Zealand Army Corps drew their bayonets, charged the Turkish trenches cavalry-style and stormed into the city.

Had they been turned back, the entire campaign might have been lost.

“We learned about the ethos of courage of Australian and New Zealand’s soldiers,” said Prime Minister Binyamin Netanyahu, who was joined by Australian Prime Minister Malcolm Turnbull and New Zealand Governor General Patsy Reddy. “It was an example of the spirit of fortitude and courage and the willingness to act in the defense of our people and our values.

“These are the values that guide us today as well,” she added. “We saw here in Beersheba 800 cavalry go against 4,000 embedded Turks with machine guns, with bunkers, the few ones against the many. That’s the spirit of the army of Israel. It stands today.”

For the Australians, the Battle of Beersheba is iconic of “the spirit of the Australian people,” said Kelvin Crombie, a historian and one of the organizers of the 100th anniversary commemorations, “Daring, bold and courageous.” Having suffered crushing defeats at Gallipoli and on the Western Front, it’s remembered as the young nation’s first real victory.

Two days later, after word of the victory reached London, Britain’s foreign minister, Lord Arthur Balfour, issued a declaration calling for “the establishment in Palestine of a national home for the Jewish people.

“Had the Ottoman rule in Palestine and Syria not been overthrown by the Australians and the New Zealanders, the Balfour Declaration would have been empty words,” he added. “But this was a step for the creation of Israel.”

Reddy said the military campaign “changed political conditions in this region in the most profound way.”

She said bonds between Australians and New Zealanders forged at Gallipoli were strengthened in the campaign. “It is only fitting that we should join together today in remembering their service and their sacrifice. We will remember them,” she said.

The three leaders continued on to an opening ceremony for a museum dedicated to the campaign.

Crombie said that more and more Australians understand that “it really was something that had an effect on world history.”