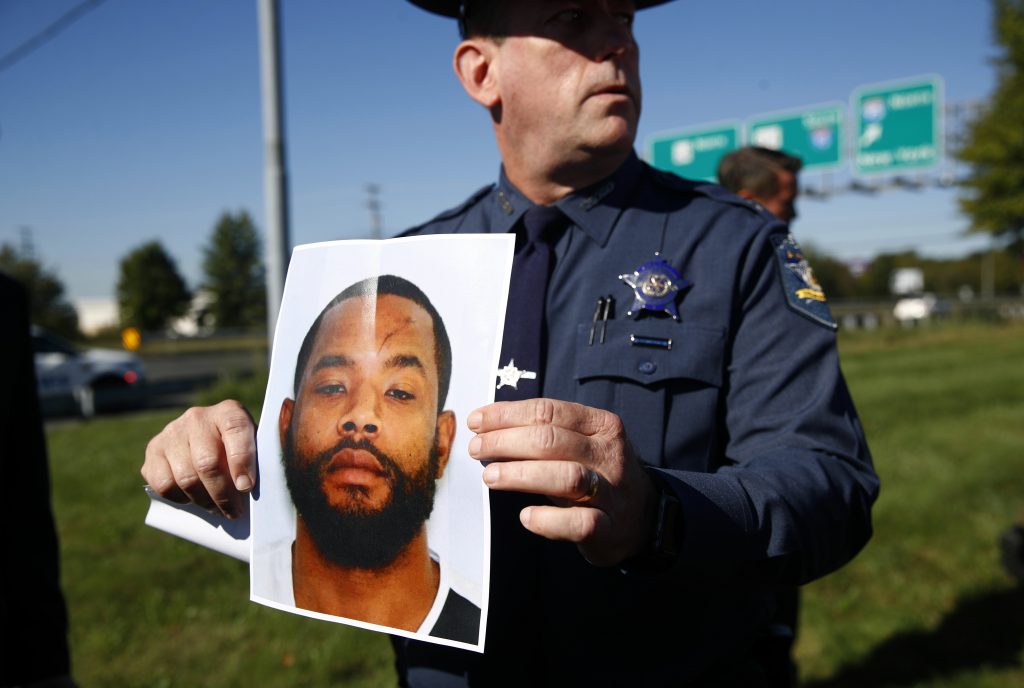 A man with a lengthy criminal past who showed up for work at a countertop company on Wednesday and shot five of his co-workers has been arrested, authorities said. Three of them were killed and two critically wounded.

Less than two hours later, Radee Labeeb Prince drove to a used car lot about 55 miles away in Wilmington, Delaware, and opened fire on a man with whom he had “beefs” in the past, wounding him, police said.

The shooting rampage set off a manhunt along the Interstate 95 Northeast corridor. Police cruisers were stationed in medians, and overhead highway signs displayed a description of Prince’s sport utility vehicle and its Delaware license plate. The FBI assisted state and local authorities in the manhunt.

Prince was “apprehended a short time ago in Delaware by ATF and allied law enforcement agencies,” the Harford County Sheriff’s Office in Maryland tweeted Wednesday night.

Wilmington Police Chief Robert Tracy said Prince was arrested in Glasgow, 20 miles southwest of Wilmington, after a tip led authorities to his vehicle. Prince was spotted nearby and discarded a handgun when he saw police had recognized him. He ran about 75 feet before being captured. No one was hurt in the apprehension.

Authorities said it wasn’t clear why Prince opened fire with a handgun on his colleagues.

The sheriff’s office said Wednesday night on social media that the people who died were Bayarsaikhan Tudev, 53, of Virginia; Jose Hidalgo Romero, 34, of Aberdeen, Maryland, and Enis Mrvoljak, 48, of Dundalk, Maryland.

Prince is a felon with 42 arrests in Delaware. Court records showed he had been fired from a Maryland job earlier this year after allegedly punching a co-worker and threatening other employees. He also faced charges of being a felon in possession of a gun, was habitually late paying his rent, was repeatedly cited for traffic violations and was ordered to undergo drug and alcohol counseling in recent years.

Investigators were treating the shooting as a case of workplace violence and didn’t see ties to terrorism, said Dave Fitz, a spokesman for the Baltimore FBI field office.

Prince faced several gun charges in March 2015 in Cecil County, including being a felon in possession of a firearm and carrying a handgun in vehicle. However, the charges were dropped about three months later. It’s not clear why.

Wilmington, Delaware, police said Prince had 15 felony convictions there. In King County, Washington, in 2014, he was cited for leaving the scene of an accident and driving with a suspended license, according to Komonews.com.

Court records also showed that he was required to undergo drug and alcoholism counseling at the time.

Prince racked up four traffic citations in King County in 2012 and 2013, mostly for speeding.