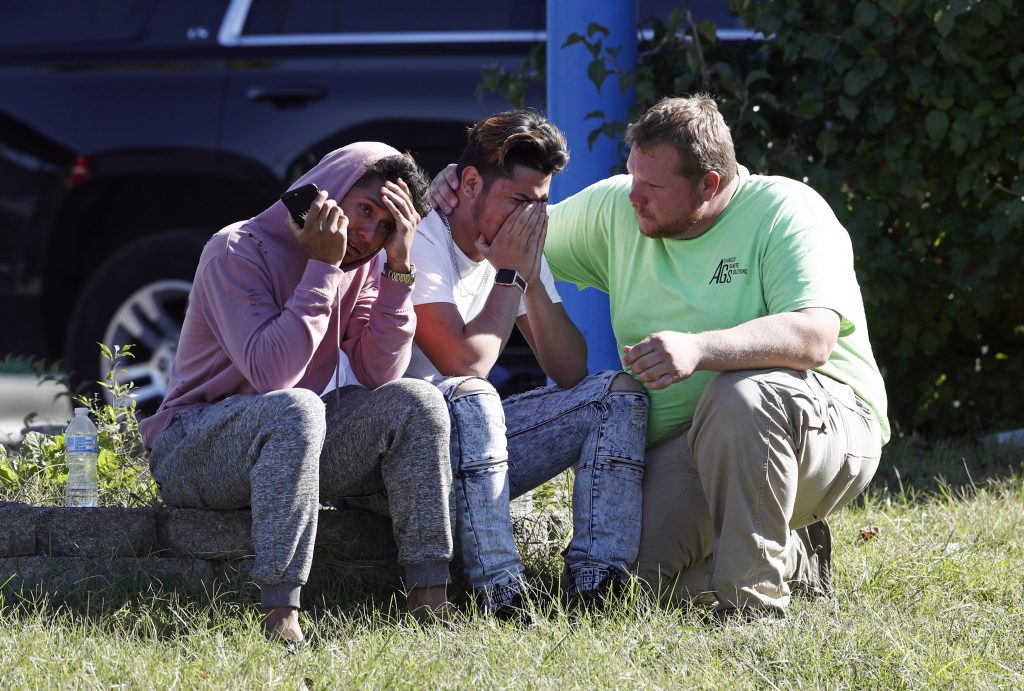 A man with a lengthy criminal past who was fired from a job earlier this year for punching a colleague showed up for work at a countertop company as scheduled on Wednesday and shot five of his co-workers, authorities said. Three of them were killed and two critically wounded.

Less than two hours later, Radee Labeeb Prince drove to a used car lot about 55 miles away in Wilmington, Delaware, and opened fire on a man with whom he had “beefs” in the past, wounding him, police said.

The shooting rampage set off a manhunt along the Interstate 95 Northeast corridor. Police cruisers were stationed in medians, and overhead highway signs displayed a description of Prince’s sport utility vehicle and its Delaware license plate. The FBI assisted state and local authorities in the manhunt.

Authorities said it wasn’t clear why Prince open fired with a handgun on his colleagues.

Prince is a felon with 42 arrests in Delaware. Court records showed he had been fired from a Maryland job earlier this year after allegedly punching a co-worker and threatening other employees. He also faced charges of being a felon in possession of a gun, was habitually late paying his rent, was repeatedly cited for traffic violations, and was ordered to undergo drug and alcohol counseling in recent years.

Kevin Doyle of Thornhill Properties said he was getting tools from his truck when he heard screaming and saw three men running from the office park. The men told him someone was shooting and he asked if they had called 911. They said no, even though, Doyle said, they had phones in their hands.

The victims and the suspect worked for Advanced Granite Solutions, which designs and installs countertops, the company owner told The Associated Press. Prince has been an employee for four months, working as a machine operator, owner Barak Caba told AP in a brief telephone interview. Caba was shaken and would not provide additional details.

Maryland Gov. Larry Hogan, who spoke at an unrelated event, said authorities in helicopters and on the ground were searching for Prince, who may be driving a black 2008 GMC Acadia with the Delaware license plate PC64273.

The second shooting took place at the 28th Street Auto Sales and Service shop in Wilmington, Delaware. The police chief wouldn’t elaborate on the history the victim and Prince had, other than to say: “This individual knew the people he wanted to shoot.”

The victim was shot in the vicinity of his head and once in the body but was expected to survive.

Police chased Prince briefly after he left the used car lot, but they lost him, and haven’t seen or heard from him since, the chief said.

Prince was fired from JPS Marble and Granite earlier this year and scared his previous employer so badly that he tried to get a restraining order in February.

At one point, Prince’s former boss Philip Siason said: “He came to see me, cursed and yelled at me about unemployment benefits. I felt very threatened because he is a big guy and very aggressive on me.”

Investigators were treating the shooting as a case of workplace violence and didn’t see ties to terrorism, said Dave Fitz, a spokesman for the Baltimore FBI field office.

Since November 2014, Prince has rented a three-bedroom townhouse in Elkton — about 35 miles from the office complex, according to a Maryland property manager.

Prince often paid his rent late, but was always polite and cooperative, said Heather Todd of Homes for Rent. The company filed eight petitions for nonpayment against him, but he always ended up paying and the company never had to schedule an eviction.

Prince faced several gun charges in March 2015 in Cecil County, including being a felon in possession of a firearm and carrying a handgun in a vehicle. However, the charges were dropped about three months later. It’s not clear why.

Wilmington, Delaware, police said Prince had 15 felony convictions there. In King County, Washington, in 2014, he was cited for leaving the scene of an accident and driving with a suspended license, according to Komonews.com.

Court records also showed that he was required to undergo drug and alcoholism counseling at the time.

Prince racked up four traffic citations in King County in 2012 and 2013, mostly for speeding.