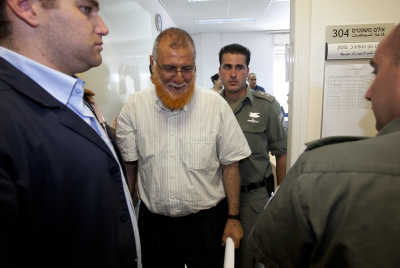 The High Court has canceled the removal of resident status of four Yerushalayim residents who were elected as members of the Palestinian Authority’s parliament as members of the Hamas list. The decision to remove their Israeli resident status was made in 2006 by then-Interior Minister Roni Bar-On, and the petition by the four to restore their resident status has been winding its way through the courts since then. The Interior Ministry removed their residency status as a breach of trust of the requirements of Israeli residency, but the court said breach of trust was not sufficient to justify reducing their status.

The four include Muhammd Abu-Tir – well-known for his henna-colored beard – along with Ahmad Atwan and Muhmmad Totah, all of whom were elected to the PA parliament on the Hamas list in 2006. The fourth individual is Khaled Abu-Arfa, who was appointed Minister of Jerusalem Affairs in the PA government.

“Residency” is a status granted by Israel to Arabs who live in areas of Yerushalayim liberated in the 1967 Six Day War. With the reunification of Yerushalayim and the imposition of Israeli sovereignty on the city, Israel gave denizens of the city a status that allows them to travel freely throughout Israel and vote in municipal, but not national, elections.

As Israel sought to fight the growing influence of Hamas in 2006, Bar-On decided to remove the residency status of the four. However, the court said that an administrative order on the matter was insufficient; the Knesset would have to pass a law arranging the matter if the government wanted to strip offenders of their status.

In the decision, High Court judge Uzi Fogelman wrote that “I am not unaware of the government’s stance that the petitioners were elected as representatives of the Hamas terror group, which denies Israel’s right to exist and seeks to destroy Israel with violent means.” The decision, said Fogelman, “is not intended to discourage the fight against terror.” But “ensuring the rule of law and recognizing the rights of the individual are a basic element of Israeli democracy,” and as a result the state has no place in arbitrarily stripping the four of their residency, the decision said.