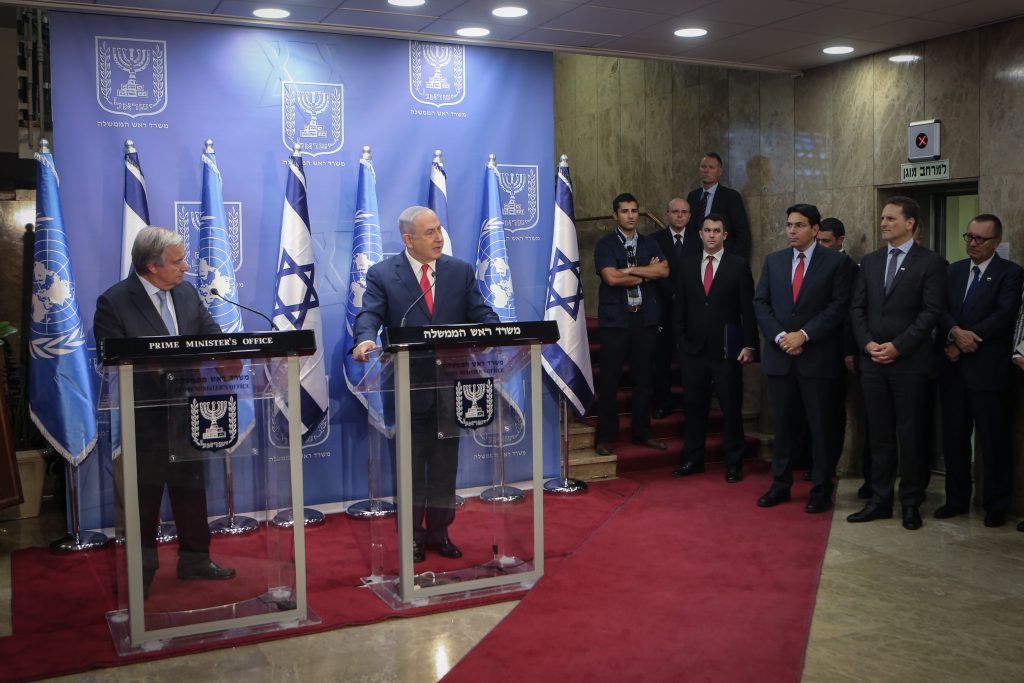 Prime Minister Binyamin Netanyahu greeted visiting U.N. Secretary-General Antonio Guterres on Monday with blistering criticism of the international body’s treatment of Israel and accusing it of failing to prevent arms from being smuggled to Lebanon’s Shiite Hezbollah terrorists.

Netanyahu also claimed that Iran is building sites in Syria and Lebanon for the manufacture of “precision-guided missiles,” with the aim of deploying them against Israel.

Both Hezbollah terrorists and Iran have backed President Bashar Assad’s government forces in the civil war that has ravaged Syria.

“Iran is busy turning Syria into a base of military entrenchment, and it wants to use Syria and Lebanon as war fronts against its declared goal to eradicate Israel,” Netanyahu said. “This is something Israel cannot accept. This is something the U.N. should not accept.”

Guterres arrived on Sunday for a three-day visit to the region, his first since taking office at the beginning of the year. His meetings with Israeli and Palestinian leaders are aimed at encouraging the resumption of peace talks.

Speaking at a joint press conference with the U.N. chief, Netanyahu criticized the United Nations, saying that it fails to check Palestinian hate speech, “absurdly denies” Jewish connections to Yerushalayim and has not stopped arms from reaching Hezbollah in Lebanon.

He was referring to a recent U.N. cultural agency resolution about Yerushalayim that angered Israel, which said it diminishes Jewish ties to the city. Israel also criticized the U.N. peacekeeping force in Lebanon, or UNIFIL, for being, according to Israel, soft on Iranian-backed Hezbollah forces in the border area.

Guterres vowed that he will “do everything in my capacity” to ensure UNIFIL fulfills its obligations. The U.N. peacekeeping force’s mandate is up for renewal at the end of the month and Israel is pressing for the force to have an increased presence to better monitor and prevent what Israel says is Hezbollah building up its weapons.

“I understand the security concerns of Israel and I repeat that the idea or the intention or the will to destroy the state of Israel is something totally unacceptable from my perspective,” the U.N. chief said.

Earlier, President Reuven Rivlin called on Guterres to curb what he described as “the discrimination against Israel” in some U.N. institutions.

Guterres, in turn, stressed his commitment to impartiality in “treating all states equally.” He said those who call for Israel’s destruction peddle in a “form of modern anti-Semitism” — though he also said he doesn’t always agree with the country’s policies.

During a visit to the Yad Vashem Holocaust memorial before meeting Israeli leaders, he warned that anti-Semitism remains “alive and well” in today’s world and vowed to combat all forms of racism and bigotry.

“I believe that the horror of the Holocaust should be such that anti-Semitism should now be dead forever,” he said, adding how he was shocked “to listen to the chant of a group of neo-Nazis in a developed country in the world, chanting ‘blood and soil,’ the slogan of the Nazis.”

Guterres will meet Palestinian Prime Minister Rami Hamdallah on Tuesday. He is due in Gaza on Wednesday.