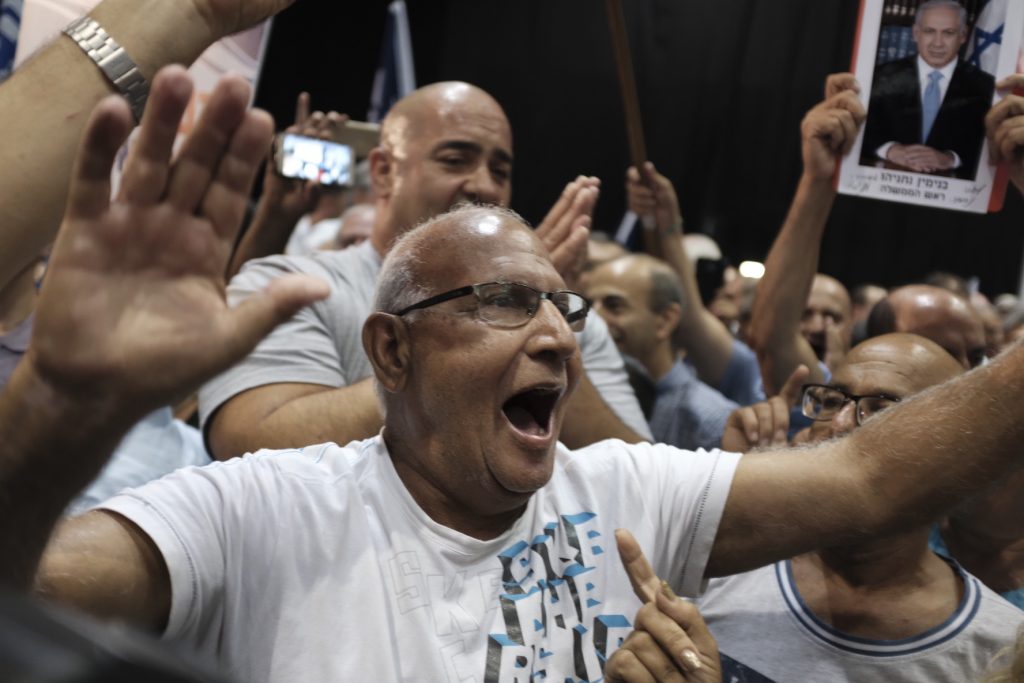 Israeli Prime Minister Binyamin Netanyahu hammered away at his theme that the corruption investigations targeting his government are politically motivated, telling a Likud-organized rally in Tel Aviv on Wednesday night that he is the victim of a “witch hunt” mounted by the media and the left.

Netanyahu opened his remarks with a denunciation of “fake news,” and claimed, as he has before, that his opponents are seeking to remove him from power with false allegations because they have not been able to defeat him in elections.

He ridiculed a former prime minister and defense minister in a previous Netanyahu government, Ehud Barak, who has repeatedly attacked Netanyahu and demanded his resignation in recent weeks.

“[Do you remember] how an old man with a new beard, who was once prime minister for a short time [Ehud Barak], and not one of the good ones, said: ‘A political tsunami is coming.’ What a tsunami! What isolation! What nonsense.”

Netanyahu accused the left and the media of collusion in “an obsessive, unprecedented witch hunt against me and my family seeking to overthrow the government…Their goal is to put inappropriate pressure on law enforcement, with no connection to justice.”

“The state of Israel is experiencing an unprecedented political advancement [in foreign relations]. Because of this the left and the media, which are the same thing, you should know, have embarked on an unprecedented obsessive [campaign] against myself and my family in order to carry out a coup of the government.

“Their goal is to put pressure on law enforcement officials to file an indictment at all costs, regardless of truth and justice,” the prime minister charged.

“It is hard for the left and the media who serve it to accept this, so they will produce endless affairs, endless stories and endless headlines, so maybe something will stick. If this doesn’t then it will be cigars. If not cigars then it’s conversations with a publisher. They demand from the law enforcement agencies, give us something – it doesn’t matter what,” he said.

An estimated 2,000 to 3,000 Likud party members and activists responded to a call earlier in the day to gather at the Tel Aviv Convention Center to show their support for Netanyahu. The event came in the wake of expressions of dissatisfaction by the prime minister and coalition chairman David Bitan regarding the failure of certain ministers in particular to defend Netanyahu in public.

Participants carried placards that read: “Love Netanyahu, keep democracy,” “The people chooses, the left doesn’t let up.” On the PA system, the song “There is no one like you in the world, Bibi, and everyone loves you.”

Some activists called out to the media: “Here are the leftists, the investigations are because of them.”

One of them said, “There is an attempt at a revolution by the leftist media, and Avi Gabbay will not help you either.” The activists called out “Bibi, King of Israel, alive and well,” and shouted together: “There is nothing, there was nothing,” echoing Netanyahu’s phrase dismissing the investigations, which he insists lack any substance.

Likud MK Oren Hazan told The Times of Israel that the rally is “to show support for Netanyahu and not to attack anyone specific[ally], but we need to understand that there are serious problems with the state prosecution.”

Bitan was chief organizer of the rally and was also expected to address the crowd. Earlier in the week, he explained that he initiated it “because of the media and public assault that is being waged on Netanyahu, not because he is being interrogated. We are also holding a support rally so Likud morale will be high and to align the ranks.”

Barak was quick to answer Netanyahu shortly after the speech on Wednesday night, saying in a tweet that “the suspect from Balfour Street continues to whine,” referring to the location of Likud headquarters.

“Likud members are proud and honest citizens, not puppets,” he says. “There is no persecution, but there is corruption, there is no leadership, only panic.”

“Likud members are not corrupt, but Netanyahu is corrupting Israel,” she said. “I am sure that many, many Likud voters — honest people and good citizens — are feeling uncomfortable tonight.”