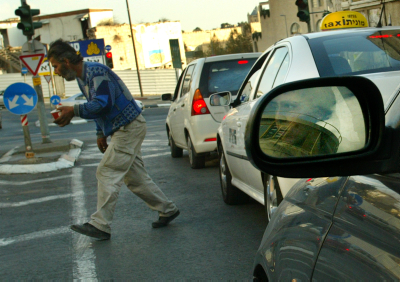 Police have busted a major ring that was responsible for one of the more annoying phenomena on Israeli roads – the sight of Arab children standing at intersections and aggressively seeking “donations” from drivers. Police arrested the leader of the ring, a resident of the Arab village of Tamra, who was responsible for bringing dozens of children between the ages of five and 11 to collect money and sell trinkets at intersections.

The beggars would be placed at key intersections, mostly in the center and north of the country. As summer, and especially bein hazmanim, is prime “driving time” in Israel, the begging “industry” grows significantly during summer months. The beggars’ modus operandi is generally to come up to a car and proffer either an open hand or a can before drivers. Often drivers have their windows open, and the children have been known to stick their hands inside the vehicle. If windows are closed, they usually gesture that they want a donation, and if denied, they move on to another vehicle.

The children are generally not violent, although some drivers have complained that they faced “aggressive” beggars who would not allow them to drive until they got some money. The real danger, police said – besides the annoyance factor – is that the children would dart in and out of traffic when a traffic light changed, in order to maximize their time seeking money from drivers before they accelerated away from an intersection. Under such circumstances, police said, drivers could find themselves running down a beggar.

In addition to the traffic dangers, the children themselves were left out in the hot sun to collect money – many without food or water for the entire period of their “shift.” Police on Monday picked up several children in northern Israel who were hungry and thirsty, and nearing heat exhaustion. Police ascertained their identity and arranged for them to be returned home, to villages in the area of Jenin.

Police are holding the main suspect in the case, considered the ringleader who arranged for transport of the children. He is also accused of taking the money from his “workers,” and throwing them a few coins when he drove them back home.

Police plan on filing charges against the suspect, and added that they would “continue to prevent illegal workers from entering Israel, and especially prosecute Israelis who make this possible. Those who facilitate entry of these workers or who provide them with a place to stay will be prosecuted to the full extent of the law.”