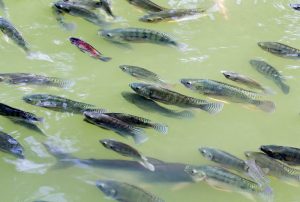 Researchers at Hebrew University have developed fish food additives that promote faster growth in fish, which could help to alleviate hunger around the world in coming years, The Jerusalem Post reported on Wednesday.

Prof. Berta Levavi-Sivan and a team of scientists at Hebrew University succeeded in isolating tiny molecules known as neurokinin B, or NKB, and neurokinin F, or NKF, that are secreted by the brains of fish and inhibit growth. They developed molecules that neutralize the effect of NKB and NKF, thereby accelerating growth rates.

Young tilapia that were fed the specially prepared “fast food” for two months gained 25 percent more weight than those that did not receive the supplement. So far, NKB has been found in 20 different species of fish, suggesting potentially broad application.

As the world population increase creates an ever-larger demand for food, one of the possible solutions that food production experts are looking at is in aquaculture, or fish farming.

While wild fisheries have been in decline for about the last 20 years, aquaculture has become the world’s fastest-growing food-producing sector. The Israeli discovery could play a significant role in helping the sector grow even faster.

In recognition of her work, Levavi-Sivan was given the Kaye Innovation Award for 2017.