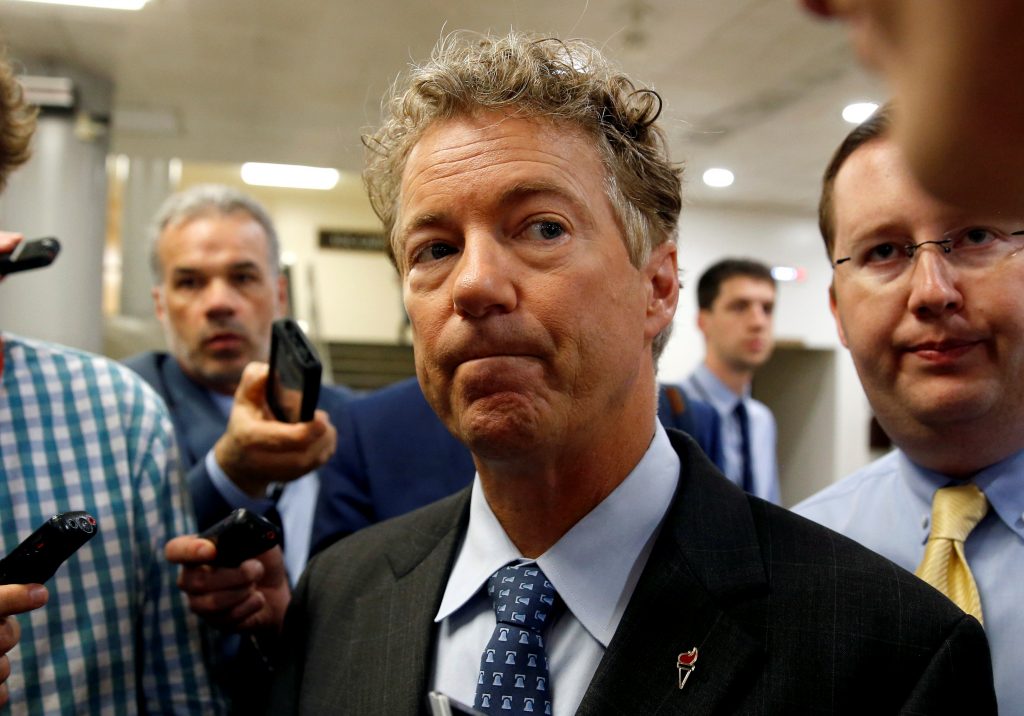 Four Republican senators from the conservative wing of their party say they oppose the Senate health-care bill as it was introduced by Senate Majority Leader Mitch McConnell on Thursday, which places the effort to overhaul the American health-care system in jeopardy as it heads for an anticipated vote in the Senate next week.

Those senators – Rand Paul of Kentucky, Ted Cruz of Texas, Ron Johnson of Wisconsin and Mike Lee of Utah – released a statement stating that while they cannot support the bill as its currently written, they are open to negotiating changes that could ultimately win their support.

“Currently, for a variety of reasons, we are not ready to vote for this bill, but we are open to negotiation and obtaining more information before it is brought to the floor,” the statement read. “There are provisions in this draft that represent an improvement to our current healthcare system but it does not appear this draft as written will accomplish the most important promise that we made to Americans: to repeal Obamacare and lower their healthcare costs.”

Their opposition is enough to place the GOP measure in serious jeopardy as McConnell can afford to lose only two Republicans and still pass the measure. The bill is being moved under arcane budget rules that allows it to be passed with a simple majority or 50 votes, if Vice President Mike Pence is relied on as a tiebreaker.

“The current bill does not repeal Obamacare. It does not keep our promises to the American people. I will oppose it coming to the floor in its current form, but I remain open to negotiations,” said Paul.

Initial signs indicated the bill could be in trouble if the Kentucky Republican intends to subject it to a vote before lawmakers leave Washington for the July 4 recess. According to two Republicans in close contact with Senate GOP leadership granted anonymity to describe private conversations, McConnell is threatening to bring the bill to a vote next week even if he doesn’t have the necessary votes.

But some believe that message is aimed at trying to pressure Republicans to support the bill rather than an absolute commitment – and that the majority leader would end the push if he doesn’t have the votes. A McConnell spokeswoman declined to comment.

“Right now the challenge is how we get to 50,” said Sen. John Thune, R-S.D., a top McConnell deputy, referring to the number of senators needed to pass the bill, with Vice President Pence standing ready to cast a tiebreaking vote.

One potentially ominous sign for leadership was the reaction of Nevada Sen. Dean Heller, R, who is up for reelection in 2018. Heller released a statement saying he has “serious concerns” about the bill’s Medicaid provisions.

“Republicans believe we have a responsibility to act – and we are,” said Senate Majority Leader Mitch McConnell, R-Ky., in on speech on the Senate floor. He underscored the taxes and regulations in the ACA that the GOP measure would repeal.

But McConnell faces the prospect of an open revolt from key conservative and moderate GOP senators, whose concerns he has struggled to balance in recent weeks. Senate leaders have more work to do to secure the votes needed to pass the measure, Republicans familiar with the effort said.

Many GOPers reserved judgment on the measure as they exited McConnell’s private presentation. In the days leading up to the bill’s release, some Republicans have intensified their complaints about the substance of the emerging bill and the tightly controlled process under which McConnell and only a small handful of aides wrote it.

Sen. Tim Scott, R-S.C., said the mood in the room made for an “interesting morning, a little tense.” He was one of several Republicans who pushed for the Senate measure to be “more gracious” than the House bill, an aim he feels was satisfied. But Scott predicted there was “a long way to go” before concluding whether it could pass.