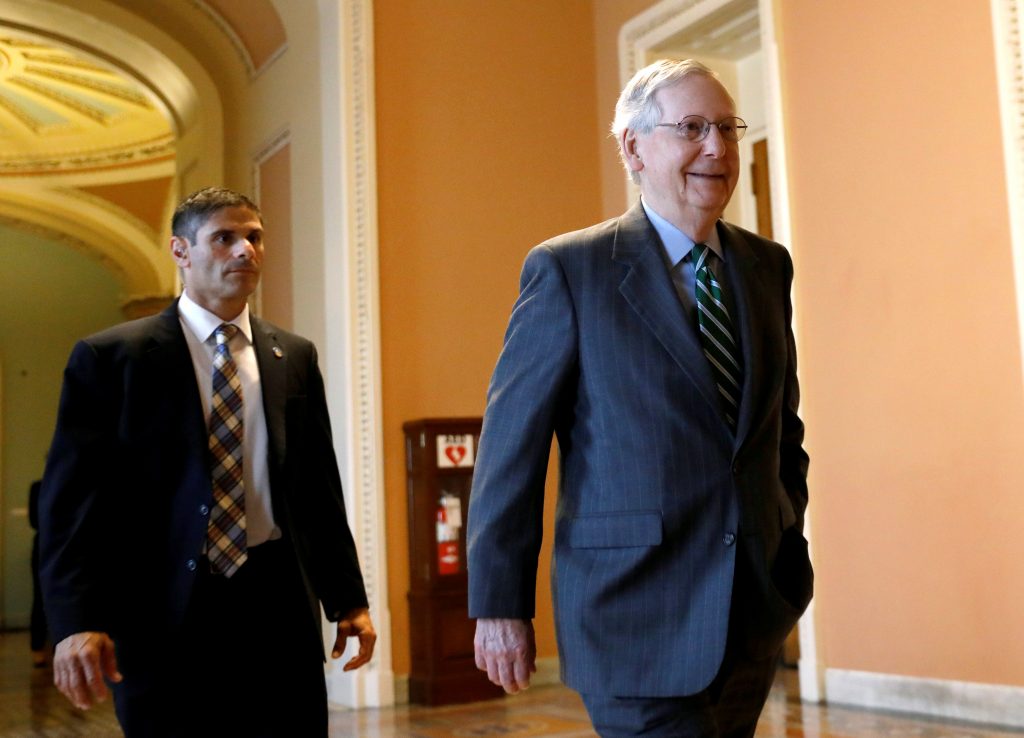 Senate Republicans on Thursday released a health-care bill that would curtail federal Medicaid funding and repeal taxes on the wealthy as part of an effort to fulfill a years-long promise to undo Barack Obama’s signature health-care law.

The bill is an attempt to strike a compromise between existing law and a bill passed by the House in May as Republicans struggle to advance their vision for the country’s health-care system even though they now control both chambers of Congress and the White House.

At around 9:30 a.m., Republican senators entered a room near the Senate chamber where leaders started briefing them on the bill. The legislation, labeled “discussion draft” and numbering 142 pages, was then posted online by the Senate Budget Committee.

The Senate proposal largely mirrors the House measure with significant differences, according to a discussion draft circulating Wednesday among aides and lobbyists. While the House legislation would peg federal insurance subsidies to age, the Senate bill would link them to income, as the Affordable Care Act does.

The Senate measure would cut off expanded Medicaid funding for states more gradually than the House bill but would enact deeper long-term cuts to the health-care program for low-income Americans. It also would eliminate House language aimed at prohibiting federally subsidized health plans from covering abortions, a provision that may run afoul of complex Senate budget rules.

But Senate Majority Leader Mitch McConnell, R-Ky., faces the prospect of an open revolt from key conservative and moderate GOP senators, whose concerns he has struggled to balance in recent weeks. Republicans familiar with the effort said Senate leaders have more work to do to secure the 50 votes needed to pass the measure, with Vice President Mike Pence set to cast the tiebreaking vote, from the pool of 52 GOP senators. No Democrats are expected to support the bill.

According to two Republicans in close contact with Senate GOP leadership granted anonymity to describe private conversations, McConnell is threatening to bring the bill to a vote next week even if he doesn’t have the votes to pass it. But some believe that the message is aimed at trying to pressure Republicans to support the bill, rather than an absolute commitment. A McConnell spokeswoman declined to comment.

Republican aides stressed that their plan is likely to undergo more changes to secure the votes needed for passage, but there were major concerns Wednesday from senators on opposite ends of the GOP spectrum.

“My main concern is I promised voters that I would repeal — vote to repeal Obamacare. And everything I hear sounds like Obamacare-lite,” said Sen. Rand Paul, R-Ky.

Sen. Shelley Moore Capito, R-W.Va., whose state expanded Medicaid and has been pushing for a more gradual unwinding of that initiative than many conservatives prefer, said she is waiting to scrutinize what is released but has not seen anything yet that would make her drop her concerns with the proposal.

“Up to this point, I don’t have any new news — tomorrow we will see it definitively — that would cause me to change that sentiment,” she said.

Like the House bill, the Senate measure is expected to make big changes to Medicaid, the program that insures about 74 million elderly and lower-income Americans and was expanded in most states under the ACA. In effect, the revisions would reduce federal spending on the program.

Yet the Senate bill is expected to go further than the House version in its approach to cutting Medicaid funding in the future. In 2025, the measure would tie federal spending on the program to an even slower growth index than the one used in the House bill. That move could prompt states to reduce the size of their Medicaid programs.

That provision, a nod to conservative lawmakers led by Sen. Patrick J. Toomey, R-Pa., risks alienating moderates, including Capito and Sen. Rob Portman, R-Ohio, who also represents a state that expanded Medicaid under the ACA. Some Republicans worry that such a move would force states to cut services or coverage, potentially leaving millions of low-income people without sufficient health care.

The growth rate that is applied to Medicaid spending going forward has major implications, said Sen. Susan Collins, R-Maine. “That inflater is critical, because it translates into billions of dollars over time,” she said.

Portman and Capito have also been pushing for the inclusion of a $45 billion fund to treat and prevent opioid addiction. As of early Wednesday afternoon, the opioid money was not included in McConnell’s proposal, according to a top GOP senator and Senate aide familiar with the discussions.

“I don’t think there is right now,” Senate Finance Committee Chairman Orrin G. Hatch, R-Utah, said when asked whether the legislation includes a distinct opioid fund. “It might have to be considered separately.”

But Portman and Capito, like all senators, will have a chance to introduce amendments to the bill when it heads to the Senate floor, which McConnell said is likely to happen next week. This process will allow senators to draw attention to the causes they have championed and potentially change the final bill.

Senators will have “an opportunity to offer a virtually unlimited number of amendments,” said Sen. Lamar Alexander, R-Tenn. One of the unanswered questions is whether Democrats will support any efforts to move the bill to the center. Asked this question Wednesday, Senate Minority Leader Charles E. Schumer, N.Y., declined to show his hand. “We’re not going to discuss strategy publicly,” he said.

GOP moderates who are on the fence about whether to support the Obamacare overhaul are likely to be pleased at the bill’s approach to insurance subsidies because they would be based on financial need, potentially preserving coverage for more people who got insurance under the ACA.

Subsidies are currently available to Americans earning between 100 percent and 400 percent of the federal poverty level. Starting in 2020, that threshold would be lowered to 350 percent under the Senate bill — but anyone below that line could get the subsidies if they’re not eligible for Medicaid.

That provision, said Larry Levitt, senior vice president for special initiatives at the Henry J. Kaiser Family Foundation, would be “a real benefit to poor people in states that don’t expand Medicaid.”

In a move that will please the health-care industry, the draft also proposes repealing all the ACA taxes except for its “Cadillac tax” on high-cost health plans in language similar to the House version. Senators had previously toyed with the idea of keeping some of the ACA’s taxes.

Like the House measure, the Senate bill would eliminate two central requirements of the current health-care law: that individuals provide proof of insurance when filing their annual tax returns and that companies with 50 or more employees provide health coverage for their workers.

In a move that is critical to insurers, the Senate measure would continue to fund for two years cost-sharing subsidies that help 7 million Americans with ACA plans. House Republicans have challenged the legality of the $7 billion in subsidies — which help cover consumers’ deductibles and copays — in court, and insurers have warned that they will have to increase premiums dramatically next year unless the federal government commits to continuing the payments.

McConnell has told Republican senators that he wants to maintain protections for people with preexisting conditions under the law. But it was not clear to some lawmakers Wednesday what that would entail.

“I haven’t seen the draft yet. I like the idea of preexisting conditions being more firmly clarified,” Portman said.

Paul criticized GOP leaders for potentially keeping some of the ACA’s “most expensive regulations,” which he says are the primary drivers of higher premiums.

“It may well be that prices don’t come down at all,” he said.

But the Senate proposal may change rules for waivers that states can file with the Centers for Medicare and Medicaid Services that could allow them to potentially scale back some of these federal mandates.

Outside criticism of the GOP effort has also been mounting. The heads of 10 managed care organizations penned a letter to McConnell and Senate Minority Leader Schumer, D-N.Y., this week saying they were “united in our opposition to the Medicaid policies currently being debated by the Senate.”

While the details of McConnell’s proposal are expected to be made public Thursday, much of focus in recent weeks has been on the process used to draft the bill.

Democrats and even some Republicans have been critical of Senate GOP leaders for crafting the proposal behind closed doors without hearings and consideration of the legislation by the relevant committees.

Several GOP senators have expressed concern about moving quickly to a vote before they fully understand how it would impact health insurance markets and their constituents.

Sen. Ron Johnson, R-Wis., said that in addition to reading the bill, “I’ll also want to get full input from constituencies in Wisconsin.”

Given that there may be just a week between the bill being posted and a final vote, he added, “I find it hard to believe we’ll have enough time.”