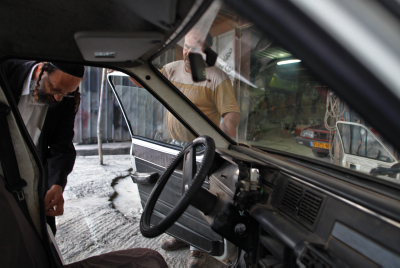 In a major coordinated operation last week, authorities responsible for the collection of Value Added (VAT) sales tax raided hundreds of auto repair shops, and cited over 120 with failing to fully account for their income, it was announced by the Tax Authority Sunday. The raid netted the state over NIS 86 million in receipts, tax officials said.

Officials went over the books of over 300 shops with a fine-toothed comb, based on advance information that they were not charging customers the 18 percent VAT charge. Among some service providers, it is “customary” to forgo the VAT charge if the customer pays in cash, and although the practice is common, it is illegal. Tax officials occasionally conduct similar “surprise operations” on businesses where a lot of cash changes hands, including grocery stores, hairdressers, plumbers and electricians and other service providers.

While focusing on the “heavy hitters,” officials also paid visits to hundreds of other shops that were delinquent in paying previous fines and VAT charges. Officials were able to collect tens of millions of shekels on the spot, offering to close deals with those who owed money if they paid up immediately. Those who were caught red-handed failing to pay tax had a range of excuses, including telling officials that they didn’t know taxes needed to be collected on certain jobs, and that the computer/adding machine/database was broken/not operating properly/was at fault. Some 35,000 people work in the auto-repair industry in Israel, officials said.