Israel Expert: Protocols Indicate Some Yemenite Children May Have Been Adopted
Israel 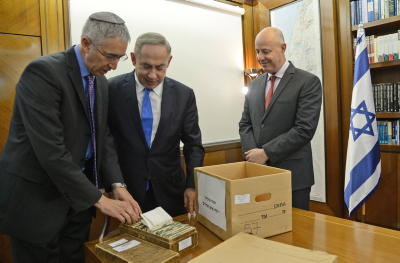 A day after the secret state protocols on cases of missing Yemenite children were opened, researchers and experts who have perused some of the 3,500 files have concluded that in some cases, at least, there is a basis to the “conspiracy theories” that claim the children were kidnapped and taken away from their families, who were then told the children had died.

Speaking to Israel Radio Thursday, Professor Bat-Tziyon Araki-Clorman, who is a preeminent researcher in the field, said it appeared that at least in some cases, the children were given for adoption to families in Israel and elsewhere. “The concerns that many parents have appear to be correct,” she said. “Information that is available leads to indications that some of the children did not die, as authorities claimed, but that something else happened to them, possibly adoption by childless families who could afford to take them in.”

Araki-Clorman urged families to set up a DNA database, in which their own DNA could be compared to that on file at hospitals, in police and security records, etc. With the help of such a database, families may be able to identify their lost members, and individuals who suspect that they are among those who may have been taken from their families will be able to identify their biological parents, if they so wish.

Meanwhile, activist groups that have long demanded the opening of the protocol congratulated the government for taking action — and are now demanding the revival of a state inquiry panel that will use the new information to make specific conclusions on cases. MKs who have been involved in the matter, especially MK Nurit Koren (Likud), one of the chief instigators of the opening of the protocol, have not yet decided to proceed with such a move.

“The opening of the protocols is the first step in the revelation of the truth,” Koren’s office said in a statement. “The next step could be a special Knesset panel of inquiry that will assemble all the data and testimonies regarding the matter, including hundreds of testimonies that have not been heard in earlier commissions of inquiry on this issue.”

According to Haaretz, some MKs are reluctant to establish a new commission, as it would necessarily require the expansion of the examination to other cases of missing children — including hundreds from families of European background who went missing in similar circumstances in the early days of the state.

The purpose of the alleged kidnapping has been the subject of many conspiracy theories, from supplying wealthy Israelis of European background who could not have their own children with babies to raise from birth, to allegations that the children were used as subjects in radiation experiments conducted by Israel at the behest of the U.S. government. Some parents claimed that they attempted to disinter the remains of their children to have them reburied at family plots, but were either told that the location of the graves had been “lost,” or that their children had been buried in mass graves and that it would be impossible to track down their children’s remains.

Governments throughout the years have either ignored or denied the allegations, claiming that the children died because of polio and other childhood diseases rife during the 1950s.