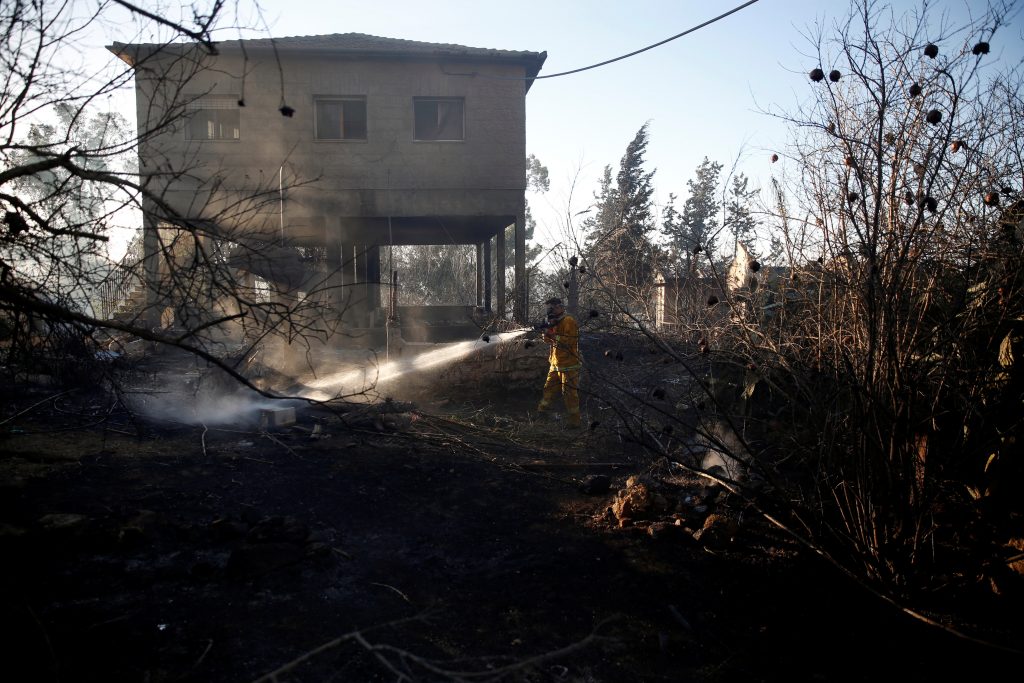 Police overnight Thursday arrested a Negev Arab who is accused of inciting fellow Arabs to set fires. In a social media post, the suspect, who is the son of a senior official in the Islamic Movement, praises the fires and calls for Arabs around the country “to burn the Zionists out of this land. There are still forests that are not burning, we must persuade the ‘thugs’ among our youth to do what must be done.” Police plan to ask for an extension of his remand. As of Friday morning, police had arrested 13 people for starting fires.

Speaking to Israel Radio Friday, Finance Minister Moshe Kachlon said that it appeared that many of the nearly 300 fires that have plagued Israel over the past four days were started by arsonists. The Finance Ministry will fully compensate victims of the fires whose homes have been destroyed or damaged by fire, Kachlon said. “We will open a special department to deal with all those whose lives have been affected by this phenomenon,” Kachlon said. “The state will take responsibility for the victims of acts of terror, which unfortunately this wave of arson appears to be. We need to provide proper assistance. The people who have lost homes and property have suffered enough.”

Speaking Friday, Justice Minister Ayelet Shaked said that “those responsible for these fires will rot in prison,” including the active arsonists and those who incite them. “We are not classifying an entire group as being responsible, but it is clear that these actions are being undertaken by people who want to damage Israel, and most of these people are acting out of nationalistic and anti-Israel reasons. According to laws already on the books, arsonists who endanger the lives of people get life in prison.”

Arab incitement to increase the fires, as well as happiness over the fires themselves, were evident throughout the day Thursday on social media channels. The NRG news site, which presented dozens of social media posts in Arabic that expressed happiness over the fires. On one forum discussing the proposed law to prevent mosques from broadcasting their call to prayer in the early morning hours, one post said that the Israelis “tried to prevent the mosques from conducting prayers, now they are burning up.” Another post said that “this is our land, and Israel will continue to burn until we return free to it.” A Twitter hashtag in Arabic, “Israel is burning,” was trending on Thursday.

Speaking to Channel Two, United Arab List MK Ayman Oudeh demanded that the channel stop using the term “Fire Intifada” to describe the events of the last several days, as hundreds of fires were set throughout the country. Fire officials said that all six of the fires in the city were set by arsonists, and the Shin Bet has opened an investigation into the fires, which have been burning in different parts of the country since Tuesday.

Oudeh denied that Arabs were involved. “We value nature and especially the nature around Haifa, where we have lived for centuries,” he said. “I demand that you stop using this rhetoric to inflame the public.” Oudeh said that the evidence police and security forces had gathered regarding the intended setting of fires in many of the blazes was irrevelant. “We are talking about individuals, and you are talking about groups. I live on the Carmel, why would I set fire to my own home?” When asked if he would classify these acts of arson as terror, Oudeh said “I don’t know.”