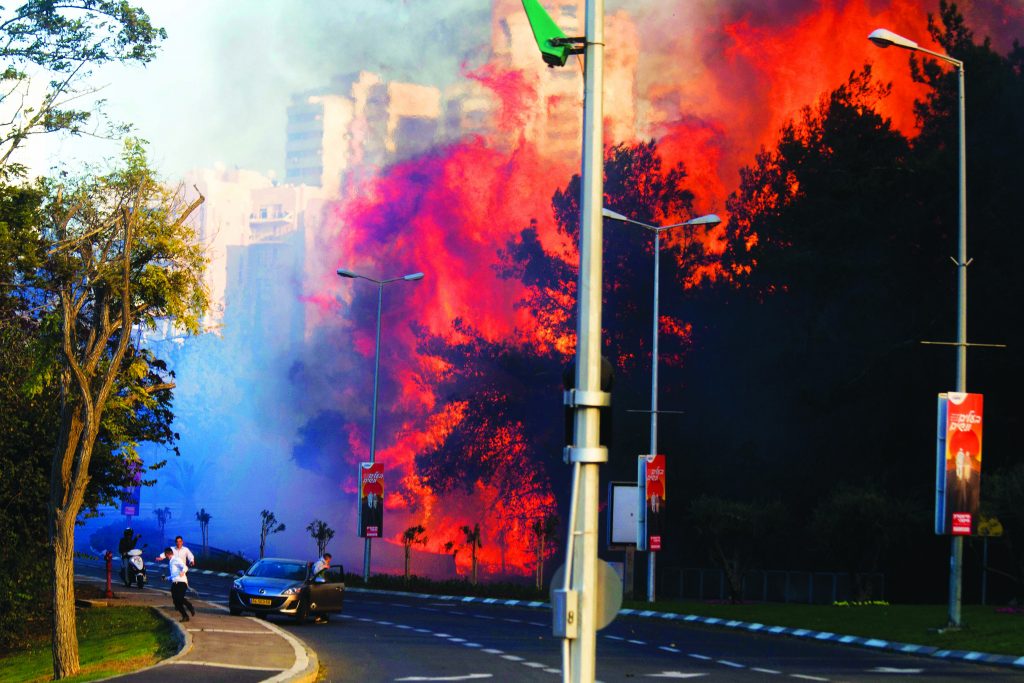 After three days of relentless fires all over Israel, the scourge of terrorism continues tonight in Eretz Yisroel.

At the end of a day during which much of the state ohad been under a siege of fire, Public Security Minister Gilad Erdan declared Thursday night that the situation was generally “under control.”

But the emergency was not over, as fires were still burning in various locations, and Erdan expressed the hope that strong overnight winds would not whip the flames up again.

However, as of late Thursday night, according to the the Yerushalayim district fire and rescue authority, twenty five firefighting crews are battling the burning of a large forest fire in and around the community of Beit Meir.

As a result of the fire, several houses have already been burned down and community residents evacuated. The fire fighters are battling giant flames in an effort to stop the fires which are presently burning out of control.

In other parts of the country, the number of evacuees from multiple fires raging in Haifa was put at 75,000 by Thursday night as some 350 firefighters and Home Front Command rescue personnel and 115 fire trucks and aircraft continued their struggle to put out the conflagrations.

A state of emergency was declared in the city on Thursday and absorption centers were hastily set up in various cities throughout the country to take care of the sudden rush of evacuees fleeing the inferno.

The Mevaser Shalom hesder yeshivah in Haifa was scorched Thursday afternoon. The building, which also houses a kindergarten, was gutted in the blaze. B’chasdei Shamayim, all students, teachers and children in the kindergarten were evacuated safely. The hesder students rushed to the kindergarten and brought out the children.

However, tragically, there was not sufficient time to save sifrei kodesh, which went up in flames.

Earlier on Thursday, Haifa firefighting spokesman Uri Tz’ibotro told Israeli media that “We are at war … and I advise everyone to listen to rescue teams and emergency instructions.”

Indeed, much of the country, not only Haifa, was fighting fire on Thursday, as the entire national firefighting capacity strained to meet the emergency.

In the Yerushalayim area, firefighters battled flames all Wednesday night in the forest while trying to protect Neve Ilan, Highway 1 and vital installations of the Israel Electric Corporation.

The spreading fire disrupted traffic on Route 443 at Shilat Junction and local residents were warned to stay indoors.

Six firefighters and two helicopters were dispatched to the Maccabim area checkpoint to keep the blaze from spreading to a shopping center in Modi’in. Nevertheless, a brushfire broke out in the parking lot of one of the Modi’in train stations, leading to closure of both stations in the city.

At the same time, fires were reported in Savyon Junction, Hadera, Kibbutz Harel near Beit Shemesh, Oranit, Yitzhar, the Rishonim Interchange, Umm al-Fahm and areas near Yuvalim and Misgav in the north of the country.

In Oranit, a large forest fire broke out and spread in the direction of Nirit. Residents were evacuated from their homes and 15 teams of fire crews were called in. Police said that by early evening, they had blocked off the entrance to the town after a number of buildings had caught fire.

In addition to firefighting aircraft from several European countries, Israel issued an urgent appeal to the American company, Evergreen, which operates the 747 Supertanker — the largest aerial firefighter in the world. Evergreen answered the call and the plane was expected to land in Israel overnight.

The Supertanker can carry over 25,000 gallons of water. It was brought to Israel during the massive Mount Carmel Forest Fires in 2010.