Israel Hundreds of Jews Daven at Kevarim in Shomron
Israel 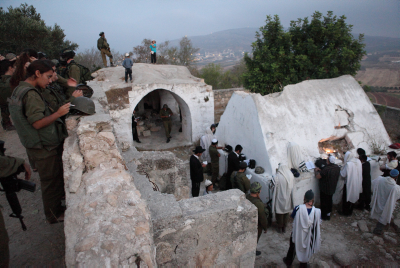 Some 400 Jews, accompanied by IDF soldiers, entered the village of Awarta, outside Shechem, Thursday night, in order to daven at the kevarim of several luminaries interred there – among them Elazar and Itamar, sons of Aharon Hakohen, and the Shivim Zekeinim who were the close confidants of Moshe Rabbeinu. The day, Rosh Chodesh Av, marks the yahrtzeit of Aharon Hakohen.

During the event, Arabs from the area rioted, throwing stones at buses carrying Jews from around the country to the site. IDF soldiers kept them separated from the mispallelim.

On Tuesday night, some 1,200 Jews visited the tziyun of Yosef Hatzaddik in Shechem. There, too, Arabs rioted, and were protected by IDF troops. B’chasdei Hashem no injuries were reported in either visit.