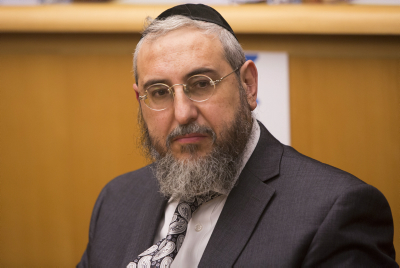 Chaim Amsalem, a former Shas MK who unsuccessfully ran his own party in the last election, announced Friday that he was joining Jewish Home. “Education Minister Naftali Bennett has done many great services for the Sephardic public,” Amsalem said in a statement, most recently “the establishment and report of the Bitton Committee on cementing the rich tradition of Sephardic Jewry in the educational system.”

Amsalem was a founding member of Shas, serving as an MK for the party between 2006 and 2012 before a falling out with party leadership several years ago. In 2013, he attempted to re-enter the Knesset with a party that he headed, but failed to reach the election threshold of 2 percent.

Amsalem said that he would seek a spot on the party’s Knesset list in its next convention, likely to be held before elections at some point in the future. Amsalem said that he especially admired Bennett for supporting the work of the Bitton Committee, headed by by Erez Bitton, who won the Israel Prize in Literature in 2015 and is of Moroccan background. In a report released several weeks ago, the committee called for an increase in the level of Sephardic historic and cultural issues in the educational system.