Chief: ‘We’re Asking Cops to Do Too Much in This Country’

The Dallas police chief said Monday he feels that law-enforcement officers across the United States are being asked to take on too much, comments that came as his department was still investigating the mass shooting of Dallas police officers last week and protesters in other cities continued demonstrations against how officers use force.

Even as the Dallas police worked to sift through massive amounts of evidence from the shooting rampage that killed five officers — an effort that entails watching hundreds of hours of videos and conducting scores of interviews — David Brown, the Dallas police chief, said he believes officers in his city and nationwide are under too much strain.

“We’re asking cops to do too much in this country,” Brown said at a briefing Monday. “We are. Every societal failure, we put it off on the cops to solve. Not enough mental-health funding, let the cops handle it. Here in Dallas we got a loose-dog problem; let’s have the cops chase loose dogs. Schools fail, let’s give it to the cops. That’s too much to ask. Policing was never meant to solve all those problems.”

During his remarks Monday, Brown also offered a hint of the toll that overseeing the response to such a shooting was taking on him. Brown, who has lived through traumas including his son’s death following the young man’s fatal shooting of an officer, said he was “running on fumes.” The chief also said he and his family “received death threats almost immediately after the shooting.”

“We’re all on edge,” Brown said of police in Dallas. “And we’re being very careful.”

The Dallas police were diving into the background of the gunman — 25-year-old Micah Johnson, an Army veteran — as they were also preparing for the first funerals for the officers slain in the attack last week. Police on Monday released information on the funerals for three of the officers, which will begin on Wednesday and Thursday.

Still, Brown said that the strain of the attack would not deter him from continuing to push for reforms to law enforcement and for community policing, efforts that have made his police department a model for change after a dark history.

“This tragedy, this incident, will not discourage us from continuing the pace of urgency in chasing and reforming policing in America,” Brown said.

Brown said he and other officers were frustrated by what police are being forced to do while lawmakers fail to seek solutions to the country’s violence.

While he called for laws and policies that could make people safer, Brown did not specify what he supports, other than to say that “something on guns” has to be done.

“Ask the policymakers to do something, then I’ll give you an opinion,” Brown said.

He also said that if he were confronted with the same perceived problems that have prompted demonstrations across the country, “I probably wouldn’t protest or complain. I’d get involved and do something about it, by becoming part of the solution.”

Brown later leveled a direct challenge to demonstrators: “We’re hiring. Get off that protest line and put an application in.”

Calls for reform and arguments over race and policing continued to roil the nation in the wake of a bloody, horrific week. In a matter of days, the fatal shootings of black men in Louisiana and Minnesota spurred outrage and demonstrations, and during one such protest in Dallas on Thursday, five police officers were shot to death by a man who authorities said was motivated by racial outrage.

Brown’s calls for reform and for police to shoulder less of a burden followed demonstrations late Sunday in cities including Memphis, Tennessee, Atlanta and Baton Rouge, Louisiana. The Louisiana capital has been the scene of intense showdowns between protesters and heavily armed riot police during demonstrations over the death of Alton Sterling, a black man fatally shot by a white police officer last week.

Some cities remained calm — notably Memphis, where the interim police director linked arms with demonstrators — but the appearance of masked riot police in Baton Rouge, followed by widespread arrests there, evoked the frenzied unrest in Ferguson, Missouri, which became a national flash point two years ago.

These demonstrations, the deaths in Louisiana and Falcon Heights, Minnesota, and the killings in Dallas have fueled a resurgent, bitter debate over policing and law enforcement. A chorus of voices asking for unity after the deaths of black men at the hands of police in Baton Rouge and outside St. Paul, Minnesota, were mixed with angry partisan finger-pointing.

Former New York City mayor Rudy Giuliani strongly criticized the “Black Lives Matter” movement, calling it “inherently racist” and again claiming that the “the real danger” to black children is “other black kids who are going to kill them.” (He has made similar comments before; statistics show that most killings are carried out by people of the same race as the victim.)

Charles Ramsey, who served as police chief in Philadelphia and Washington, also warned of another potentially dangerous moment in the near future. He said it was likely that “some incident” would occur at the coming political conventions in Cleveland and Philadelphia because of the “extreme rhetoric” raging nationwide.

“We are sitting on a powder keg,” Ramsey said Sunday during an interview on NBC’s “Meet the Press” program. “I mean, you can call it a powder keg, you could say that we’re handling nitroglycerin. But obviously, when you just look at what’s going on, we’re in a very, very critical point in the history of this country.”

Brown said that in Dallas, investigators were still seeking clues about Johnson, who officials say had amassed ammunition, guns and bomb-making material. When they searched Johnson’s home, police found “a large stockpile” of explosive material, and what they found was enough to tell a bomb technician that Johnson “knew what he was doing,” Brown said Monday. “This wasn’t some novice.”

There was no evidence yet that Johnson learned about explosives from his time in the military, Brown said, adding that it was possible the gunman could have learned it online.

Investigators have questioned Johnson’s mother as they sought to piece together more of his background, behavior and plans, Brown said.

“We don’t know the scope of his plans yet,” he said.

Brown also said that the gunman appeared delusional and, at one point before he was killed by a bomb delivered by a police robot, scrawled the letters “RB” in blood. Investigators were still trying to determine what the letters meant, Brown said Monday.

During his remarks Monday, Brown revealed additional details about the robot, saying that the $151,000 Remotec Andros Mark V-A1 sustained some damage after the incident, but remained functional.

Brown said he has no second thoughts about using the robot. “This wasn’t an ethical dilemma at all for me,” he said. “I’ll use any tool at my disposal to save an officer’s life.” 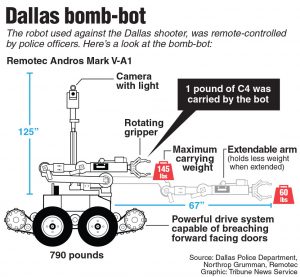 On Sunday, El Centro College — the epicenter of the attack in Dallas, which unfolded during a protest over police shootings — said that two of the seven police officers who were injured and survived the attack were with the college’s police force.

One corporal was shot and injured by a bullet when Johnson shot out glass doors at the college’s entrance, the school said in a statement, but that corporal continued to work “with bullet fragments still lodged in his stomach.” The other officer was injured by glass shards sent flying by the gunman’s bullets, the school said.

The crime scene that remained in a central chunk of downtown Dallas snarled traffic Monday and served as a reminder of a tragedy that still looms over the city.

Darlene LaToure and her colleagues at a local law firm could not get into their offices Monday inside the Bank of America tower, which remained closed. Instead, they gathered around tables inside the Purple Onion restaurant a block away to do their best to carry on with business.

“It didn’t really hit until I came downtown today,” said LaToure, who typically parks in the garage where the shooting began.

It was hardly a routine day for Melvin Davis, who operates a street sweeper in downtown Dallas. Traffic was snarled. Roads were closed.

“I’ll be more than grateful for just a normal day,” said Davis. The Friday morning after the shooting, he came to work to find a mostly deserted downtown that had turned into a sprawling crime scene.

“There was an eerie feeling in the air, given what had happened,” he said. “We couldn’t clear the streets because everything [was] on lockdown.”

Instead, they cleaned a police memorial and a park downtown where a vigil would take place for the victims.

“The mood around here is still kind of somber. It’s still sad,” said Jeff DiCicco, who was setting up tables and chairs outside a nail salon and spa near the shooting site. “Everything is starting to come back to normal. But I don’t think it’ll ever be the same.

Christian Washington was ready to head back to his summer internship at Dallas City Hall on Monday. He had been part of the march on Thursday night, and held up his hand to show the still-healing injuries he sustained while fleeing the gunfire.

“It’s not going to be the same here,” said Washington, 17. But at least returning to the office offered a way to think about something different. “To me, work is like a safe place.”

Berman reported from Washington. Matt Zapotosky in Washington and Camille Pendley in Atlanta contributed to this report.