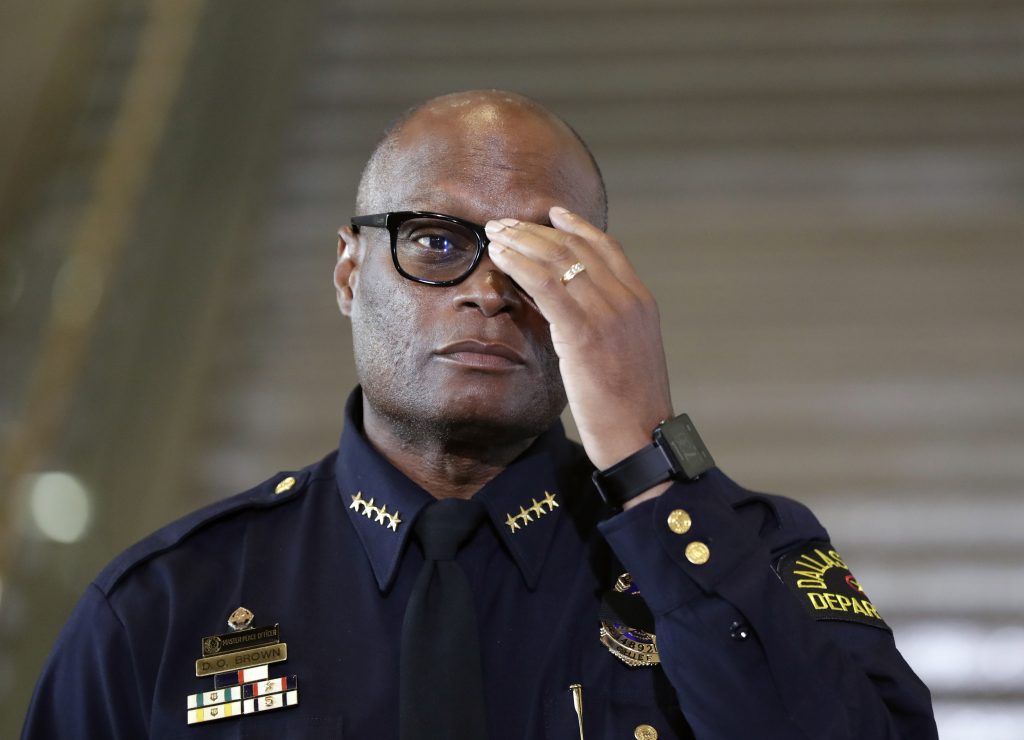 Even before five police officers were killed Thursday at the site of a Black Lives Matter protest where seven other people were wounded, Brown had become all-too familiar with grief, pummeled by it again and again in his career and personal life.

Before this week, violence had already taken from him a former partner, a brother, a son.

It wasn’t the first time Humphrey, who was once the police chief in Lancaster, Texas, a suburb of Dallas, had seen Brown step up under painful circumstances. In June 2010, Brown was only seven weeks into his new position as chief when the son who bore his name killed a Lancaster police officer and another man before being fatally shot more than a dozen times.

It was Father’s Day, Humphrey recalled.

But even as Brown mourned his 27-year-old son, a young man who struggled with mental illness, Brown asked Humphrey for help. He asked if he could reach out to his son’s victims and arrange a meeting. On the two consecutive evenings Brown walked into their homes, Humphrey recalled, he did so not as a police chief but as a father who was hurting, too.

“He approached those families as David Brown, the father of a young man that caused so much hurt in both of these families lives,” he said. After Humphrey made the introductions and hugs were exchanged, Humphrey walked outside to give the families and Brown privacy. “As I was walking out the door, I heard David say, ‘First of all, I’m sorry,’ and ‘My son was not raised this way.’”

When Brown was named police chief in 2010 after climbing the ranks of the Dallas police department, he entered the position with a reputation of being an intense and introspective leader, according to those who knew him. A Dallas Morning News profile at the time quoted him as telling a friend, “You know I’m a loner, man.”

But for a private man, his personal pain has been excruciatingly public – and those who know him say it places him in a unique position to lead an anguished Dallas police force.

“He is setting an example to chiefs all over the nation of what resilience is and how to help your officers get through these tragedies,” Humphrey said. “He’s a true leader.”

Doug Kowalski, who served as Brown’s supervisor when he worked in the internal affairs department and later with SWAT, sent him a text message Friday. He told him he was thinking of him and that he was doing a good job, and to keep it up.

“It has not been an easy ride for David Brown, but he is a man that can handle anything that comes his way,” said Kowalski, who is now the police chief in Prosper, Texas. “I know his professionalism and his faith will allow him to pull through it.”

As a chief, Brown will face several tasks in the days and months to come, Kowalski said. He will have to oversee the criminal investigation into the shooter and an administrative investigation on how the officers responded. He will also, Kowalski said, have to bury the dead officers, mourn for them and then somehow forge ahead.

“You have to move forward,” Kowalski said. “The rest of the city still depends on police services.”

Both in internal affairs and SWAT, Brown excelled under “lots of stress, lots of strain,” Kowalski said. He also saw him come back after the death of his son.

“Who has ever faced anything like that before?” Kowalski said. “I was praying for him and hoping for the best, and he came though it. I can’t tell you I was surprised. That’s the kind of guy he is.”

Brown’s son, who was also named David, was bipolar, according to media reports, and an autopsy determined that he had a drug in his system. Earlier that day, his friend had called police to say he was having “a psychotic breakdown” and had hit her, reports said.

Hours later, he shot 23-year-old Jeremy McMillian as he drove with his friend and two children near a Lancaster apartment complex. Lancaster officer Craig Shaw, 37, among those who responded to the shooting, also was shot and killed by the younger Brown.

Before that day, Brown’s son had only a minor criminal record, including an arrest involving an illegal substance.

The personal loss was not Brown’s first — or second.

In August 1988, Brown was working in the physical-evidence section when he responded to the shooting of an officer, according to the Morning News. On the ground at the crime scene, Brown saw a familiar pair of glasses.

They belonged to his former partner, Walter Williams, a 47-year-old father of three who had been Brown’s classmate at the police academy. Brown was with Williams’s children the night they learned their father had died at the hospital.

“He’s a good man,” said Williams’s son, Walter Williams II, who was 15 at the time of his father’s death. His siblings were 12 and 5, he said. All three were comforted by Brown. “He let us know everything was going to be okay, telling us what was about to happen, what to expect. He told us he was going to be there for us.”

And he was. Williams said that Brown helped his mother, who has since passed away, whenever she needed it.

Brown spoke to the Morning News in 2010 about how the death changed him, saying “When things like that happen and you’re really close, you don’t believe it for the longest time. I really relate to all of those in-the-line-of-duty deaths [on a] much more personal level. You lose a partner, you just never get over it.”

He might say the same of his younger brother Kelvin who was killed by people dealing in illegal substances in the Phoenix area in 1991 — but he has not said much about that loss, except to acknowledge it remains a piece of him.

“I can’t deny that’s a part of who I am,” Brown told the Morning News. “The families of victims, I know what they go through.”