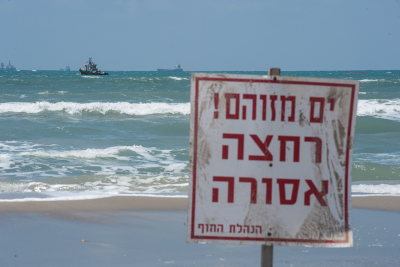 Efforts were underway Wednesday to clean up oil that leaked out into Haifa Bay on Tuesday when a pipe that was being changed by an Eilat Ashkelon Pipeline Company employee slipped. The leak closed beaches in at least three Haifa area communities, and the beaches are to remain closed for the duration of the cleanup.

The oil spill took place in the middle of Haifa Bay Tuesday morning during routine work to replace aging pipes. There has been no estimate as to how much oil spilled, but large globs of oil could be seen floating on the Bay’s surface. Strong currents were pushing the oil north, and it was expected to hit shore on Wednesday, with some expected to reach as far north as Akko.

Cleanup will take at least two days, reported Roni Amir, director of the Environment Ministry’s Ocean Defense unit. “This is not what you would call a disaster, but an ordinary pollution incident that requires care. The company was prepared for the possibility that something like this would happen, and most of the oil in the spill was handled quickly, with some patches getting away. Beaches in the area should remain closed until the oil is cleaned up.”

In a statement, the Eilat Ashkelon Pipeline Co. said that it was cooperating with the Environment Ministry on the cleanup, “and work will continue with all available resources until the mess is removed.”