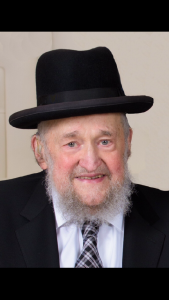 Yeshivas Chofetz Chaim of Queens mourned the passing of its long time Mashgiach and maggid shiur, Harav Shmuel Neiman, zt”l. With his genuine love for every talmid and a high bar of expectations, he played a key role in molding generations of bnei Torah for over half a century.
“His all-encompassing influence on the yeshivah is something that cannot be replaced,” Rabbi Chaim Schwartz, executive vice president of Yeshivas Chofetz Chaim told Hamodia. “He was a person whose presence and bearing evoked great respect from the talmidim and went a long way in maintaining the high level of the yeshivah.”
Rav Neiman was born in the late 1920s to Reb Yaakov Yechiel, z”l, and Mrs. Shira Devorah Neiman, a”h, in Rockford, Illinois. He attended Yeshivas Telshe before traveling to New York to join the small group of talmidim studying under the Rosh Yeshivah, Harav Alter Henoch Leibowitz, zt”l, at Yeshivas Chofetz Chaim, then located in Williamsburg. He would remain within the yeshivah’s walls for nearly 70 years, as a yeshivah bachur, kollel member and, ultimately, a key member of its hanhalah.
During those years, Rav Neiman forged a very close relationship with the Rosh Yeshivah, who served as his key mentor, both in his methodical and analytical approach to learning as well as in his worldview, shaped by the hallowed mesorah of the Slabodka school of mussar.
He also maintained a close bond with Harav Chaim Pinchas Scheinberg, zt”l, who was then the yeshivah’s Mashgiach. In 1960, when Rav Scheinberg moved to Eretz Yisrael, at the request of the Rosh Yeshivah, Rav Neiman took over his position as Mashgiach and began delivering a daily Gemara shiur.
Rav Neiman put tremendous efforts into the preparation and delivery of his shiur, which was designed as a preparation for Rav Leibowitz’s shiur, known for its creativity and intricacy. The niftar emphasized the importance of each bachur having a clear understanding of the key sources for the sugya being studied. Once he was confident that the bachurim had a firm grasp of the material, Rav Neiman then methodically explained how the “puzzle” came together. In his great dedication, on several occasions that he had to travel out of town, he woke his talmidim and delivered shiur in the early morning hours.
“It was a law in the yeshivah that the boys who were best prepared for the Rosh Yeshivah’s shiur were the ones who had gone through Rav Neiman’s shiur first,” said Rabbi Schwartz.
In addition to imparting knowledge and a clear derech halimud, Rav Neiman also used his shiur as a forum to develop the self-confidence and middos of talmidim. If a bachur mumbled a response, he would often make them repeat it loudly saying, “One day you’ll be a maggid shiur or a Rav and people will need to hear you.”
With a caring but firm hand, he epitomized the traditional role of a yeshivah mashgiach. With his vigilant eye and regular rounds throughout the yeshivah building and dorms, Rav Neiman maintained a tight sense of discipline and preserved an atmosphere of hasmadah.
In the early 1970s, Rav Neiman began making weekly visits to Harav Moshe Feinstein, zt”l, presenting him with an array of questions in halachah, lomdus, and hashkafah — commiting these exchanges, as well as those he had with an array of Gedolei Yisrael, to his trusty tape recorder. With his natural gift for organization, Rav Neiman then carefully catalogued each issue on index cards. Wanting to ensure that the treasure of Torah be preserved, as early as the 1980s he purchased and learned to use a computer, in order to compile a database of the priceless conversations.
He is survived by, ybl”c, his wife, Rebbetzin Shulamis Neiman; sons, Rabbi Yisroel Yitzchok, Rabbi Tzvi Nochum, Rabbi Dovid and Rabbi Naftoli; daughters, Rebbetzin Chana Greenblatt, Rebbetzin Yitta Freidman and Rebbetzin Chevy Shmidman, as well as many grandchildren and great-grandchildren.
Yehi zichro baruch.

The Inequality of Equivalency?