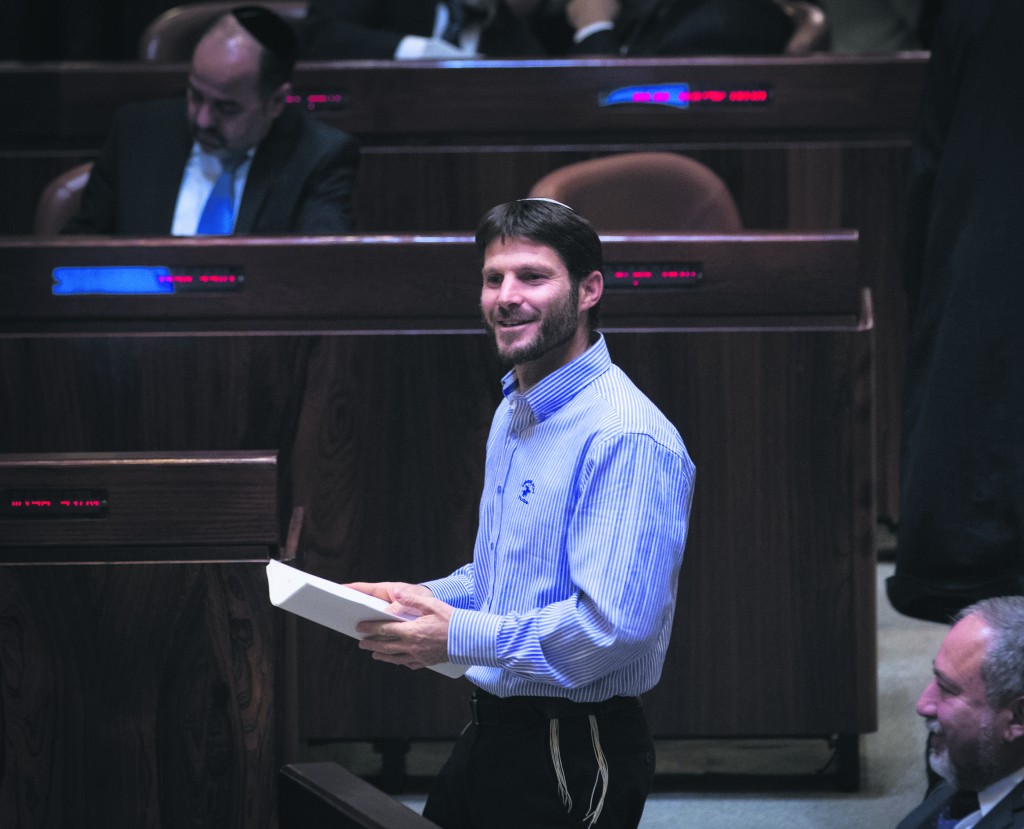 MK Betzalel Smotrich on Wednesday said that he had decided not to let Binyamin Netanyahu’s coalition fall, hours before the Zionist Camp planned to propose a Knesset resolution to disperse the Knesset. Speaking to Channel Two, Smotrich said that from an examination of how the government was handling the re-entry of Jews into two buildings in Chevron that they had been evicted from last Friday, he was satisfied that the government was taking the issue seriously. As such, he would vote with the coalition in Wednesday’s votes.

With Smotrich reversing his position, a mini-coalition crisis that has turned out to be one of the most serious in the current government’s life has apparently come to an end. It began last Friday, when Smotrich (Jewish Home) and Oren Chazan (Likud) said they would not feel committed to voting with the government in the wake of the removal of dozens of people from Beit Leah and Beit Rachel, two buildings that Jewish groups claim they purchased from Arabs.

Defense Minister Moshe Yaalon had demanded to see documentation attesting to the sale – which the residents were reticent to produce, in order not to endanger the lives of the former owners, who, by selling their property to Jews, were now subject to a death penalty sentence by the Palestinian Authority. He then sent in IDF troops to evict the 80-some people who had taken up residence in the buildings.

Smotrich and Chazan railed against the eviction. Speaking Friday, Chazan said that “it would be best for the government if it did not propose any laws on Monday” – and if the opposition declared them to be votes of no-confidence, that would bring the government down. “It is unacceptable for the defense minister to run his own private policy, defying what the government has decided. I have been complaining for a long time about the defense minister’s implementation of a de facto building freeze. It stands to reason that anyone who buys a house should be able to live in it, whether it is in Tel Aviv or Chevron.”

The government narrowly avoided a test of the MKs threat on Monday. A proposed no-confidence vote that could have brought the government down was canceled at the last moment – with Knesset Speaker Yuli Edelstein canceling the session just before the motion was set to be voted upon, in order to enable MKs to get home before a predicted snowstorm blanketed Yerushalayim with snow.

With Wednesday’s weather partly cloudy and snowless, Netanyahu is unlikely to be bailed out by the weather again – but, according to Channel Two political analyst Yoav Krakovski, the cancellation of Monday’s vote gained him two crucial days in which to shore up his coalition support, which apparently he was able to do.

In Sunday’s cabinet meeting, Netanyahu said that the government was urgently seeking to resolve the situation. “The government supports settlement at any time, especially now when it is under terrorist assault and is taking a courageous and determined stand in the face of terrorist attacks,” the prime minister said. “With the same breath, we are a nation of law and we must respect the law. As soon as the procedures regarding the purchase are approved, we will allow the two homes in Chevron to be populated, as indeed occurred in similar instances in the past. The process of checking is starting today; we will do it as quickly as possible. If, in any case, it is not completed within a week, I will see to it that the Cabinet receives a status report.”