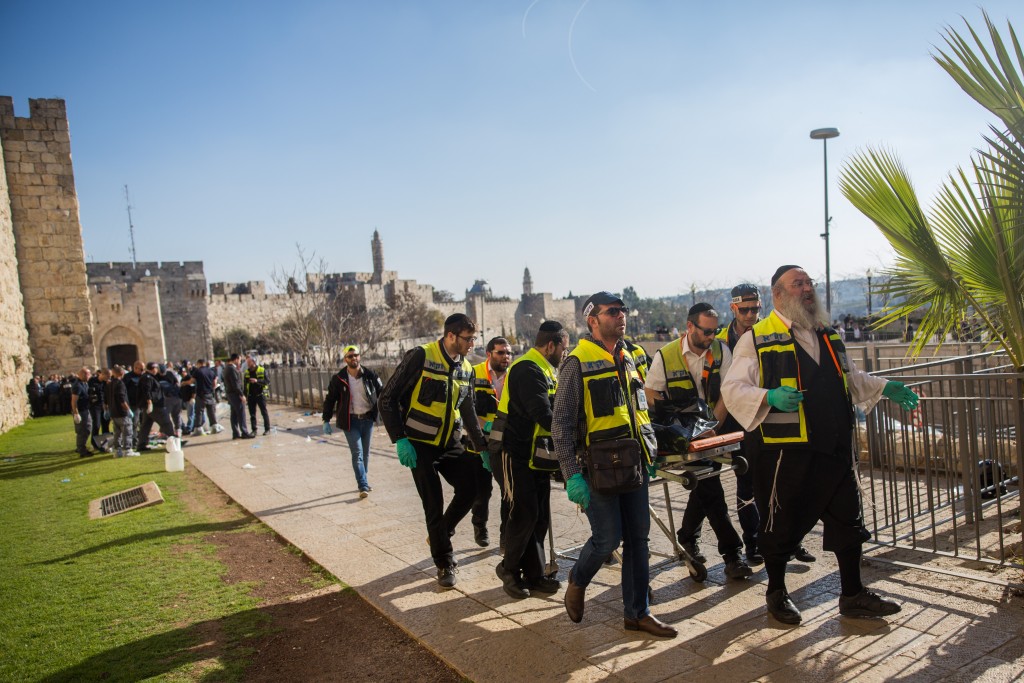 Two Jews were killed and one seriously injured Wednesday in a terror attack outside Yerushalayim’s Old City, near the Jaffa Gate.

Two terrorists began stabbing people, seriously injuring two Jews, one of whom later died. Police fired at the terrorists, killing one and injuring one, but sadly, a Jew was also hit by the police gunfire, and he later died from his wounds.

The Jew who was killed by the accidental fire from police was identified as Ofer Ben Ari z”l, 46, of Yerushalayim.

The Jew who died from stab wounds was identified as Rav Reuven Biermacher Hy”d, 51.

Rav Biermacher, originally from Argentina, was a rebbi in Yeshiva Aish HaTorah’s Spanish program. He had spent the morning teaching, and was killed as he left the Old City, Rabbi Steve Burg, Director General of Aish HaTorah, wrote in a message to the yeshivah posted on his social-media page.

Speaking to Israel Radio, an Ichud Hatzalah volunteer at the site of the attack said that he and his crew “arrived at the scene of the attack a few minutes after it took place. We gave the victims first aid at the site, and they were then taken to hospitals in the area. The three were unfortunately seriously injured.”

One witness told Israel Radio that she had passed the site of the attack as it was happening. “I saw two people struggling, and I thought it was kids fooling around, but as I watched them struggle I realized it was something else. I saw one terrorist trying very hard to stab a victim, and the victim fighting him off with all his strength.” The witness said that shots were then fired, and the terrorist was neutralized.

The witness said that she had just arrived in Yerushalayim after leaving her home in Dolev, north of Kiryat Sefer, where she and other drivers had been subjected to rock attacks. “Baruch Hashem they missed my baby by a matter of inches, but I know that others were actually hit and injured by the rocks,” she added.

Speaking on Israel Radio, Yerushalayim Deputy Chief Assi Aharoni said that the police officers “acted with great bravery in taking on these terrorists, who were prepared to kill anyone in their path. The attack could have been much worse.”

The third victim, Mordechai Aharon ben Leah Miriam, was seriously injured as is in need of tefillos.

“May the A-mighty strengthen us all during this difficult time and may he bring all those responsible to justice,” wrote Rabbi Burg.