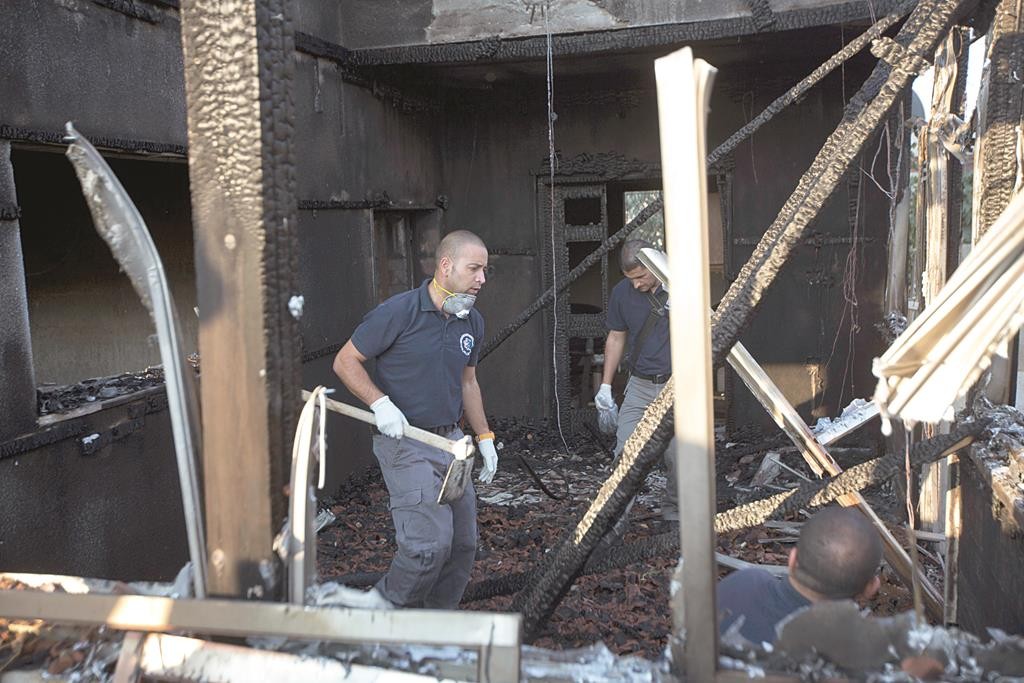 Riots broke out all over Yehudah and Shomron, and in Arab areas in Israel, following an anonymous attack in the village of Duma, near Shechem, early on Friday morning. Masked vandals threw a firebomb into an Arab home where the Dawarsha family lived. A one-and-a-half-year-old baby was killed and his four-year-old brother and mother were seriously injured. The vandals also painted the words “revenge” on the wall.

Investigations by the security services show that the vandals reached the village at 2 a.m. on Friday morning and threw the firebomb into the house before fleeing. The parents tried to save the children, but were not able to because of their own injuries. The house went up entirely in flames. The act was widely condemned across the spectrum.

An Israeli medical team that arrived at the scene summoned an Air Force helicopter to evacuate the mother and brother to Tel Hashomer Hospital. The rest of the family was taken to a hospital in Shechem. At the same time, masked vandals tossed firebombs at a nearby Palestinian home, and it also went up in flames but no one was at home. The house was also entirely destroyed.

CGS Gadi Eiskenkot conducted briefings with GSS head Yossi Cohen and with other generals in the Central Command. The CGS roundly condemned the act and said it was a very serious incident. He also ordered more troops to be deployed in the area to prevent potential unrest from getting out of hand.

Army Spokesman General Motty Almoz also classified the incident as very serious. “I don’t remember such a serious incident in recent years. It’s a crime and it’s not for naught that we called it an act of terror and we condemn it in every way possible,” he emphasized. “The IDF views this as a terror attack and harshly condemns all terror activity in Yehudah and Shomron, including Jewish terror. The IDF and the security establishment will continue to work to maintain order and security in the region.”

Due to fears that the incident would lead to unrest, the spokesman said that the IDF has brought thousands of soldiers to Yehudah and Shomron to maintain order.

The head of the Civil Administration, General David Menachem, as well as members of the coordination administration in the region, visited the members of the family and the heads of the village. They informed them that the Israeli security forces would do everything necessary to apprehend the perpetrators.

Before Shabbos, Prime Minister Binyamin Netanyahu issued a harsh condemnation of what he called a Jewish terror attack. The prime minister also met with the heads of the GSS and the IDF and demanded that they do everything possible to track down those who threw the firebombs.

In addition to the investigation at the scene, the IDF has launched an intelligence operation.

Riots broke out across Yehudah and Shomron as well as in some Arab areas of Israel.

There were also pockets of violence in other areas. A Palestinian terrorist approached an IDF outpost in the Binyamin region and threw a firebomb; he was shot and later died of his wounds. He was a resident of the Jilazoun refugee camp near Beit El.

There were flare-ups in Yerushalayim, on the roads in Gush Etzion, near Chevron and on the outskirts of Palestinian towns in the northern Shomron. IDF forces intervened in a clash between Palestinians and Jews near the town of Eish Kodesh in Binyamin, when hundreds of Palestinians from nearby Kusra began throwing stones at the Jews.

In Beit Hanina in northern Yerushalayim, a firebomb was thrown at Beit Hashivah, and in the East Talpiot neighborhood stones and firebombs were thrown at Jewish houses. In the Shuafat refugee camp, IDF and Border Police forces were attacked and had to use riot dispersal measures to disperse the crowds.

Dozens of drivers reported damage to their cars and light injuries of drivers and passengers in the Old City of Jerusalem. Firecrackers were thrown at police officers who were securing the area. Two officers were lightly injured and taken for medical care.