Israel V15, Launcher of ‘Just Not Bibi’ Campaign, Received Funding From an Organization Backed by the U.S. State Department
Israel 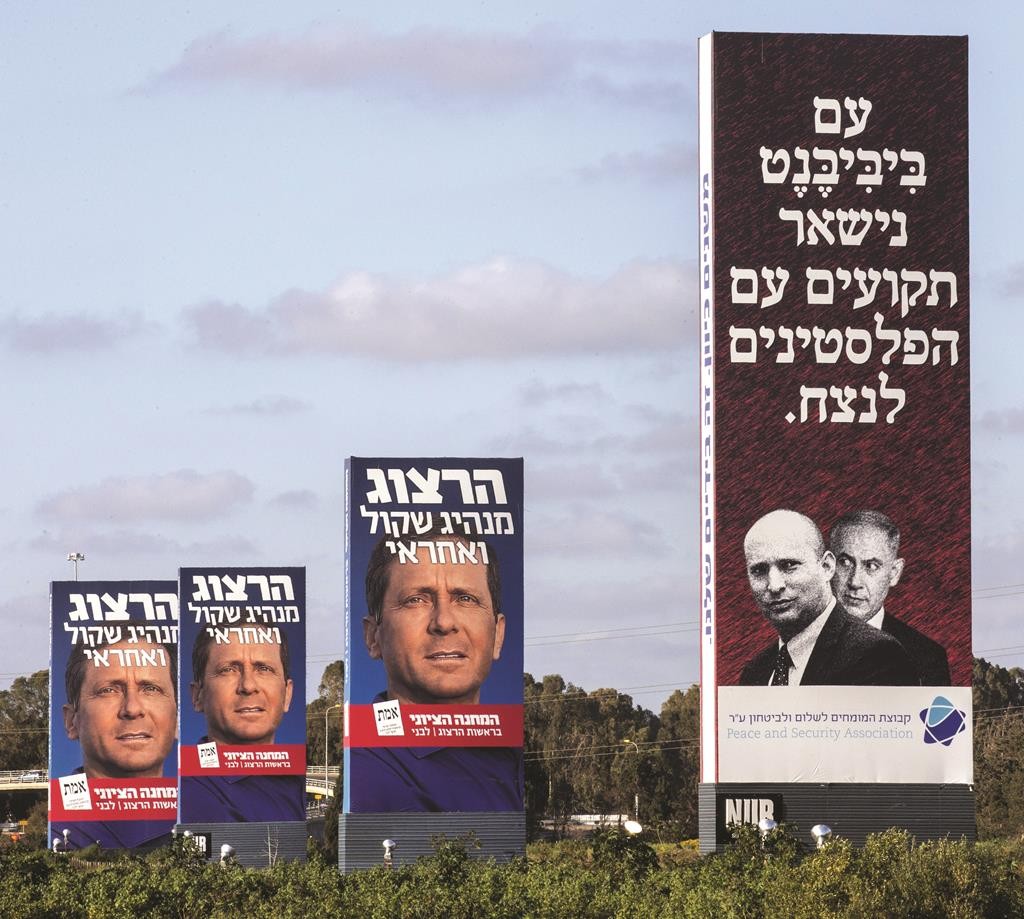 It’s unrealistic to think that U.S. administrations don’t take an interest in Israeli elections, or that they don’t try to influence their outcome.

But if, previously, the attempts to intervene were subtle, taking the form of veiled threats that U.S.-Israel ties would be strained if one particular candidate (usually a right-winger) won, this year they appeared to be much more direct and included funding for organizations and efforts aimed at unseating Prime Minister Binyamin Netanyahu.

“A lot of foreign funding was behind the big leftist rally at Rabin Square in Tel Aviv, which was very polarizing,” says Professor Gerald Steinberg, head of NGO Monitor. “We have these V15 organizations, there are at least three or four of those, with a lot of money to spend on trying to get their message across. That’s American money coming in to influence the Israeli elections.”

V15, which stands for Victory 15, was launched by two Tel Aviv residents, Itamar Weizman and Nimrod Dwek, under the banner “Just Not Bibi.” It quickly morphed into a countrywide effort with 50 offices from Kiryat Shemona in the north to Be’er Sheva in the south.

Its founders attributed their success to American-style “canvassing” that sent thousands of volunteers door to door and sophisticated use of the social media, in much the same way that President Barack Obama used the internet to raise funds and gain votes.

Interestingly, Jeremy Bird, a former Obama campaign strategist, was one of V15’s consultants.

Where did the fledgling organization get its funding? “We were approached by OneVoice to give us a donation, and we were so thrilled that successful businessmen want to invest in Israel’s future,” Weizman told CBN News in February.

OneVoice is a nonprofit group that received two grants from the U.S. State Department to promote Israeli-Palestinian dialogue among both Israelis and Palestinians. The first, $233,500, was targeted for a OneVoice campaign in Israel, while the second, for $115,770, was earmarked for OneVoice efforts in the Palestinian Authority. The idea was to launch grassroots activities aimed at “empowering them [Israelis and Palestinians] to propel their elected representatives toward the two-state solution.”

While OneVoice was a presence in the Israeli street trying to stir up public pressure to get Netanyahu to the negotiating table, no one can recall billboards in Ramallah or Shechem urging the PA to sit down with Netanyahu and make concessions for the sake of peace.

In the recent campaign, OneVoice made no secret of its political views. “We believe that it’s critical that the majority of Israelis who are concerned about the numerous security and socioeconomic challenges we face have their voices heard in the next election,” it said in a statement. “We need a prime minister and a government who will be responsive to the people.”

How much money poured into Israel to “advance the peace process,” i.e., to topple Netanyahu? Estimates range from $2 million to $3 million, according to Steinberg’s NGO Monitor, to tens of millions.

If the money is coming from governments, rather than private individuals and organizations with an agenda, the problem is even greater. “It’s a matter of undermining Israeli sovereignty,” Steinberg says.

Foreign funding to advance a leftist agenda — whether to drum up support for a two-state solution or for giving the Reform movement legitimacy — is nothing new. According to David Bedein, head of the Israel Resource News Agency, the Peres Center for Peace receives funding from 19 different foreign governments.

But none of these efforts have seen such crass, overt intervention in the Israeli democratic process as the V15-OneVoice campaign. Moreover, the funding they received was used to undermine unity, launching an unprecedentedly vicious campaign that polarized the country and shook up the trust between the country’s defense establishment and the prime minister.

The Council for Peace and Security, a leftist group of former senior IDF and security officials, held a carefully timed press conference accusing Netanyahu of being a danger to the country, betraying the confidence between a prime minister and his top officials. “Imagine how the next prime minister will feel about confiding in his closest advisers,” said journalist Amnon Lord. “He has to worry that these security bigwigs are going to undermine him in a few years.”

Naftali Balanson, managing editor of NGO Monitor, welcomes the U.S. Senate’s announcement that it will investigate State Department funding in the Middle East.

“If it turns out that U.S. government funds went to V15, whether by intention or by accident, that is a serious matter that requires investigation by the U.S. Congress in order to evaluate how something like that could happen.

“I don’t think it looks good for the American government to give money to an organization with such a clear political angle.”

Behind the move to investigate the funding are Sen. Ted Cruz (R-Texas) and Rep. Lee Zeldin (R-NY), who sent a letter Jan. 29 to Secretary of State John Kerry asking whether OneVoice ­— as a recipient of almost $350,000 in recent grants from the Obama administration’s State Department — had violated its tax-exempt status when it began backing V15.

Cruz also publicly asked whether Obama had “launched a political campaign against” Netanyahu in the run-up to last week’s election.

“What does it say about the president of the United States when he’s more concerned about undermining and attacking the prime minister of Israel than he is standing up to the mortal threat a nuclear Iran poses?”

In an interview with Fox News, Cruz expressed outrage over the mounting indications the Obama administration could be implicated in efforts to meddle in the Israeli election.

“This is manifesting itself right now in President Obama’s national field director helping run the campaign to defeat Prime Minister Netanyahu in Israel in coordination with a nonprofit group that has received hundreds of thousands of dollars from the American taxpayer,” he said.