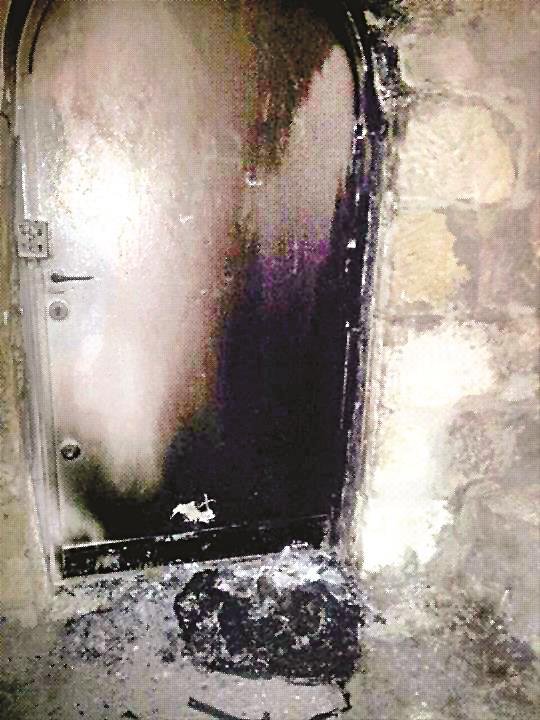 The door leading to the ma’arah where lie two saintly Rebbeim of Ger — the Bais Yisroel, zt”l, and the Lev Simcha, zt”l — was charred from firebombs thrown in a horrific display of desecration of Har Hazeisim. In two previous incidents, on Rosh Hashanah and Sukkos, Arab thugs with covered faces destroyed upward of 50 graves. On Friday night the ongoing violence in Yerushalayim spilled over onto Har Hazeisim in what eyewitnesses said was the worst incidence of desecration in recent memory. In addition to the firebombs, the Arab thugs destroyed more than a dozen graves, leaving broken matzeivos, burning tires and garbage strewn on the road leading to the Gerrer chelkah.

In earlier desecrations, the Arab thugs desecrated the matzeivos of Agudah leader Harav Yitzchak Meir Levine, zt”l, and the Modzitzer Rebbe, zt”l. As in previous incidents, the Arabs burned the wires of more surveillance cameras. Police arrested four of the perpetrators and this time, say officials, those apprehended were adults.

The widespread violence continued throughout Yerushalayim over the weekend, with new attacks on the light rail in the Shimon HaTzaddik (Wadi Joz) area, where Arabs attacked security forces; a firebomb attack against Mosdot Beit Orot; and other attacks in Ir David. Nearly half of the city’s light-rail fleet has been damaged and is out of service as a result of damage sustained in terror attacks.

There were these other developments: The government finally deployed more than 1,000 police officers to eastern Yerushalayim yesterday. In full riot gear, the police were given orders to display zero tolerance as they seek to restore order in the area.

Minister of Internal Security Yitzchak Ahranovich ordered the police to quickly bring order. The Minister, who has been widely criticized for his feeble response to the Arab unrest to date, cancelled a scheduled visit to the U.S. this week. He is expected to testify on Monday before the Knesset’s interior Committee, headed by MK Miri Regev (Likud). He will be joined by leading police officials in what is expected to be an extremely contentious session.

Leaders of the International Committee for the Preservation of Har Hazeisim are heading to Yerushalayim this week for urgent consultations with government and Knesset officials. The ICPHH is pressing for the complete gating of the Jewish cemetery on Har Hazeisim, where 150,000 Jews are buried. Avrohom Lubinsky, Chairman of the ICPHH, said, “It would be a mistake to think of the latest desecrations  on Har Hazeisim as part of the unrest in the city. It is a clear and methodical plan to deny Jews their heritage and their past.” He expressed his disappointment that the promises by officials to secure Har Hazeisim has failed miserably.