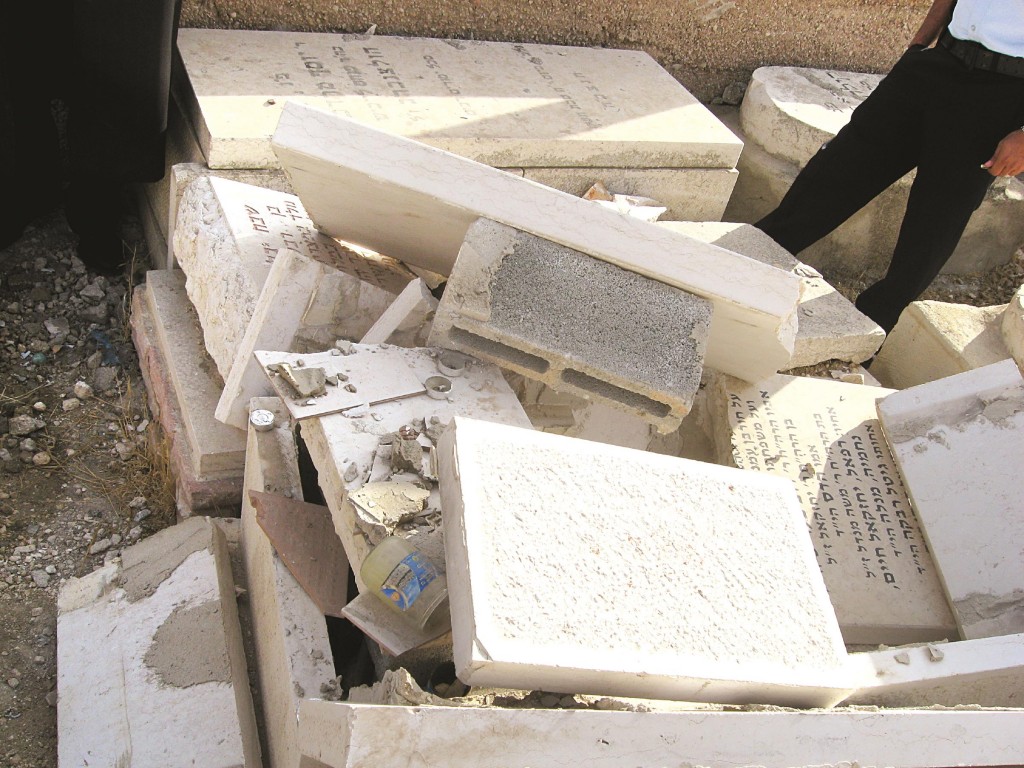 An urgent appeal to Israeli authorities to construct a high-tech fence around the Jewish cemetery on Har Hazeisim was issued by the International Committee for the Preservation of Har Hazeisim, headed by Avrohom Lubinsky. The call came after some 50 graves were desecrated in the chelkah of Gur on Rosh Hashanah and on Sukkos. Among the graves desecrated were those of Agudah leader Harav Yitzchak Meir Levine, zt”l, and Harav Yisrael Dan Taub, the Modzitzer Rebbe, zt”l.

The first Knesset member to visit Har Hazeisim after the Yom Tov desecrations
was MK Rabbi Yisrael Eichler (UTJ) who has been very outspoken about the lack of a police response to the wanton desecrations by Arab thugs. Rabbi Eichler was joined by Jeff Daube, a member of the Israel branch of the ICPHH as well as Meir Eichler, a member of the Board of the U.S.-based ICPHH. Rabbi Eichler was shocked and outraged at what he found. He toured the Ger Chelka where the worst desecrations took place as well as other areas of Har Hazeisim. Despite being accompanied by police and other security officials, Arab youths threw fireworks at him which landed at his feet. Security officials responded with teargas. MK Eichler also saw busted fences, downed burnt out surveillance cameras, and garbage strewn everywhere, reminiscent of the way Har Hazeisim was prior to the large investment by the government that began in 2010 to secure and beautify the cemetery.

In response to the latest developments on Har Hazeisim, Mr. Lubinsky said that as one of Judaism’s holiest sites and the burial site of more than 150,000 Jews from throughout the ages, there was as much a need for security for Har Hazeisim as the Kosel Hamaravi and Kever Rochel. He added: “It is unfathomable that Jews should not be able to rest in peace even after death in Yerushalayim and that visitors to the kevarim of their loved ones and tzaddikim should be stoned.” He noted that the Committee’s efforts to install 137 cameras and a police sub-station over the past four years were apparently insufficient in keeping Arab terrorists away from the mountain. As many as 12 cameras were destroyed by the terrorists prior to their Rosh Hashanah rampage to prevent the cameras from capturing their despicable act of destroying tombstones.

ICPHH officials are recommending the construction of iron gates around the Jewish cemetery with several access points to be controlled by security officials. Arab schoolchildren callously trample on graves to and from school. Many Arab vehicles routinely use the narrow Har Hazeisim roads as a shortcut to their villages. Construction material is often carted through the cemetery. While there are short walls around most of the cemetery, they are easily breached and in some instances the walls are open, affording Arab hooligans easy access to graves.

Lubinsky said that “most cemeteries around the world are routinely fenced in and that the lack of such a fence is an open invitation to the kind of vandalism we have witnessed over the Yamim Tovim.” He noted that the Arabs in the most recent desecrations burnt the wires of surveillance cameras, rendering them useless. “They have no business on Har Hazeisim and we will do whatever we can to protect the kedushah and kavod hameis on Har Hazeisim,” he said. Lubinsky revealed that the Committee was planning to send a high-level delegation to Israel to press for the fencing.

While praising MK Eichler for his concern and immediate visit to Har Hazeisim, Mr. Lubinsky said: “I wish I could say the same for the other Knesset members who appear to be passive in the face of this disgrace happening in their own back yard and in Yerushalayim Ir Hakodesh.”