Israel Reflections on a War
Israel 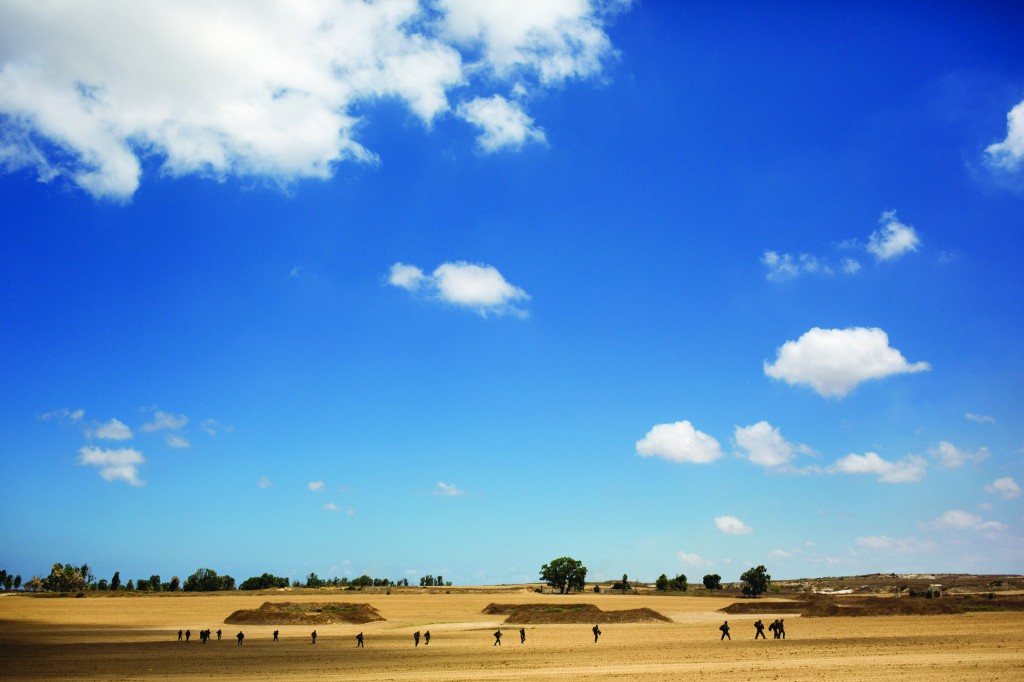 Israeli soldiers on patrol near the border with Gaza. (AP Photo/Dusan Vranic)

“Mommy,” my daughter Adina tells me, “did you know that I have my own Israeli soldier that I daven for? You can call a phone number and get the name of a soldier.”

My daughter has gone through sefer Tehillim numerous times these past few weeks. I imagine her soldier, riding his tank atop her tefillos.

Do I want my own special soldier to pray for? Can I shoulder that responsibility? I am shattered by loss. I watch the numbers climb every day and I cannot staunch the grief. To have one of my own… Could I bear it if… if…?

I call the number.

When I light Shabbos candles it is for—

When I say a brachah it is for—

When I say a perek Tehillim it is for—

The face of each soldier that is killed could be the face of my own soldier. I scan their names, pained by the relief I feel when it is not him.

I recently received a phone call from someone in the United States.

“How’s it going over there?” she asked me.

“It’s… well, however difficult you imagine it to be — it’s harder than that.”

“That’s so interesting,” she said. “Some of the people that I speak to in Eretz Yisrael tell me that they barely feel the war.”

They carry a hundred tons — the names of the soldiers who, under cover of night, creep through enemy territory, fear dripping down their backs.

They carry a thousand tons — the names of the fallen. Each one feels like the loss of a relative.

The girls go to the Tehillim groups that have sprouted like beautiful flowers all over our community. But the boys, they listen to the rumbles of the bombs in the South. The earth trembles under our feet. We sit outside with them and we watch the sky.

Applause! “Yeah, they got them!”

They grab balloons and they fill them with water.

“Take that!” Shlomo says, tossing his water balloon over the fence in our yard.

“Where is everyone?” I yell.

I gather the children and we go to the sealed room. We close the door. I say Tehillim and I kiss my baby’s soft hair. Shlomo and his friend stand close to the window, hoping to hear…

“They saw me throw that water balloon,” Shlomo says. “That’s why they tossed a missile back!”

This is entertainment. I could cry. But for my children, I smile.

“Are you sending Rivkah on the trip?”

Yes. While I feel my own life frozen in time, she is eight years old. A child. Rivkah will go on the trip.

It is only five minutes away from Beitar. She will come back at noon. The staff at the amusement center will instruct the girls on what to do in case of a siren.

If you can, find a tree to crouch near.

If you can’t, lie on the grass.

Cover your head with your hands.

At noon I read in the news of the thwarted terror attack. A bomb rigged with explosives, two minutes from my community. Am I reading a novel? Hashem saved us through one of His messengers, one of our dear soldiers. He jumped on the car. He risked his life to save ours. The love flows through me.

At two I get the phone call that the girls will be delayed.

Almost like, “We just want to buy the girls some ice cream. Slight delay.”

But it is not ice cream.

And then it is three o’clock. And they are still defusing the bomb and the roads are closed.

And then it is four o’clock and then five. I wonder if Rivkah is hungry.

Six o’clock. The phone rings and I grab it. The girls will be sleeping in a wedding hall only minutes from home. They have no way of making it back here. A neighboring community will open its doors. They already brought the girls thick loaves of bread, thick loaves of love. They will bring them blankets and pillows and warmth.

Seven o’clock. They arranged for buses to take them around the long way. They will come back to Beitar through the back door. Instead of a five-minute ride, it will take close to an hour.

Eight o’clock. The back door to Beitar is closed. The Arabs in the neighboring village are throwing rocks at the vehicles on the roads. The girls are now in Yerushalayim. They will sleep in the holy city.

Nine o’clock. The door opens. I hear her voice from my room before I see her. My daughter is home.

I scoop her up, I touch her cheeks, her hair, her nose. I squeeze her close, then I look in her eyes.

“I’m fine!” she says, smiling. “It was kef! We grabbed slices of bread to eat and we sat in the hot sun and the counselors put on funny plays. It took an hour and a half to get home from a place only five minutes away! How funny!”

And that night, it is funny for Rivkah. But the next night, nine-year-old Shlomo tells Rivkah that there is a terrorist on the loose near Gaza. He tells her that they dug tunnels under their kibbutzim. Rivkah clutches me with both arms in her bed and she cries. I tell her that this is far away, so far away, but she cannot be consoled. I sit with her one hour and then two and her eyes close in fitful sleep while Shlomo stands outside — watching the rockets fall like shooting stars from the sky.

My home is a drop-off point for packages for the soldiers. I bake them cookies and I seal them in plastic containers, the moisture condensing on the sides. My children write letters.

“We daven for you constantly. Please come home safe. We love you.”

Tzippy draws a picture of a soldier eating the cookies that we baked.

And then the neighbors start coming.

Each package is adorned with letters from the children. A friend of mine whose brother serves in Gaza tells me, “The soldiers decorate their tanks with those drawings. It gives them hope.”

I fill one oversized laundry basket with things that are delivered for the soldiers — socks and undergarments, shampoo and soap, honey and dried fruit — anything to sweeten their journey. That basket fills and then another is quickly filled.

The main drop-off point receives a message that the packages will be distributed tomorrow, but then, no more, please! The entire country is running down to the border bringing baskets with fruits and nuts and affection.

And I swell with a pride so fierce I’m afraid I might burst.

Missiles are raining down on our country but the entire country has taken to the streets to feed and clothe our soldiers!

The rumors travel in whispers.

Rav __ said Moshiach is on his way.

There will be no Tisha B’Av this year!

My husband tells me and the children to stop thinking this way. Too many times there was too much hope. Too much hope leads to too much disappointment. It isn’t our way.

But I hang on to one tendril of hope anyway.

The air is crackling, ripe with passion and love and torment all at the same time. Our nation is united, undivided, brothers arm in arm. Maybe.

It is that longing that we take with us from this war — more than anything else.