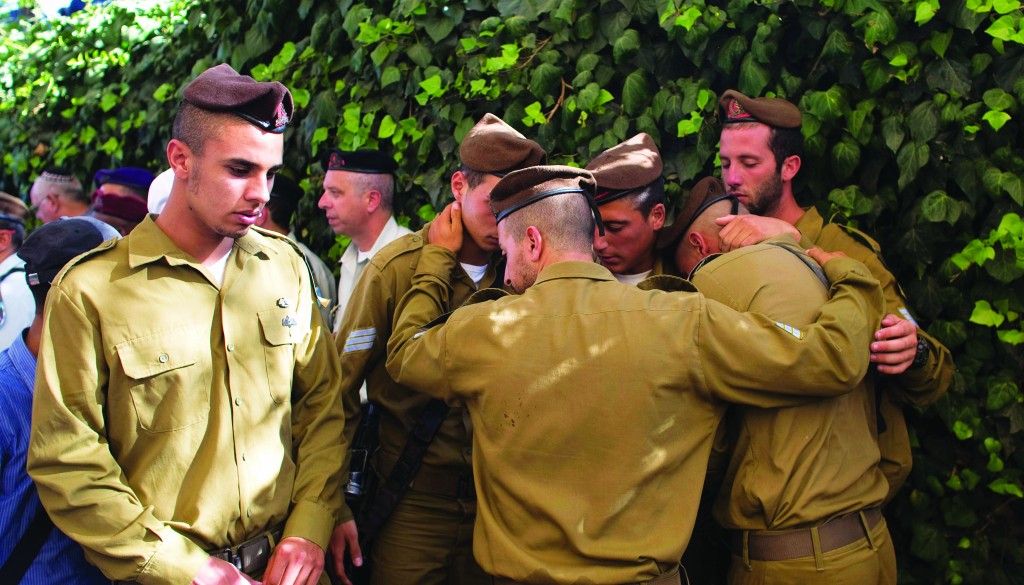 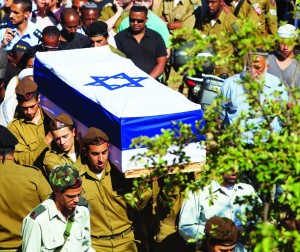 Another difficult bloody day in the war in Gaza unfolded yesterday as seven IDF soldiers and commanders, Hy”d, were killed in various clashes while 30 more were wounded. Three of them were injured seriously, 8 were moderately wounded and 19 were lightly injured. Since the beginning of the fighting, 25 soldiers and officers were killed and 135 were wounded.

The IDF operation focused yesterday on destroying the Hamas headquarters in the Saajaiya neighborhood of Gaza, which was razed to the ground, and on exposing and exploding tunnels.

The most significant, and deadly, incident yesterday took place early in the morning, when IDF soldiers inside Israel, on the border between Gaza and the town of Sderot, discerned two large cells numbering some 20 armed terrorists, infiltrated through a tunnel in the northern Gaza Strip into Israel. After they were detected by the scouts, an IAF plane was alerted to the scene, which quickly bombed the first cell.

The second cell, which had used the same tunnel to get into Israel and had turned in a different direction, laid an ambush for Israeli cars and fired an anti-tank missile at a military vehicle. The vehicle exploded and all four passengers were killed. A military force rushed to the scene and killed 10 of the 20 terrorists. The rest succeeded in getting back to the tunnel and fled back into the Strip.

Chief of Southern Command General Sammy Turgeman spoke about yesterday’s thwarted attack near Kibbutz Nir Am and said that the operation proves how much we knew and were focused on the targets. “Yesterday, we attacked Beit Hanoun, in the exact area of this tunnel. The enemy saw that we are striking this area and decided to utilize the asset of this tunnel before we take it away from them,” he said.

“The modus operandi of entering the area and destroying tunnel infrastructure is bothering the enemy. They understand that they have worked for years and invested huge sums of money and thousands of hours of work into something that can be taken away from them during this operation.”

According to Turgeman, the fear of losing the tunnels as a strategic asset has led Hamas to try and carry out that attack in the morning. “Hamas decided to use this asset and paid for it with the death of many of the terrorists that infiltrated,” he said. “Our forces acted properly, and served as a true barrier between Kibbutz Nir Am and the terrorists. With that, we paid a great price — but we prevented a huge attack.”

He added that in recent years, the Southern Command has been working tirelessly to find a solution to the tunnel threat on both an intelligence and a technological level. “The tunnel threat has no Iron Dome, and a lot of work is being done to find a solution,” he said. “We have succeeded in honing our abilities in a number of areas, and the fact is that in recent months, we uncovered four tunnels. There is no such thing as one hundred percent intelligence, certainly not in a complex area such as the Gaza Strip.”

He said that the combination of the ground forces backed by air strikes is proving itself against the threat. It maximizes the effectiveness of the military operation. “We tried using all the tools at our disposal before unleashing this ability, and the results prove that we had to also use the ground option. Thankfully, we have managed to save families, kindergartens and other schools in the Gaza Envelope region from the threat of the tunnels.”

Soldiers from the Givati unit exposed to tunnel openings in Saajaiya in northern Gaza yesterday at midday. There was a gun battle between the terrorists and the force that found the tunnels; two terrorists were killed.

The IDF forces also succeeded, b’chasdei Shamayim, in thwarting several attempts by the terrorists to use tunnels to attack soldiers.

Hamodia’s correspondent notes that throughout the day yesterday, the ground offensive of Protective Edge continued, against the backdrop of incessant rocket fire into Israel. At this point, the ground operation is still pinpointed and its objective is to destroy terror infrastructure in Gaza. Since the beginning of the operation, 2,769 terror sites have been targeted. The IDF has discovered 45 tunnel openings, part of which were found in homes and mosques. Likewise, since the ground operation began, more than 110 terrorists were taken out, and 1,032 targets were hit. Among the targets were the rocket networks, homes that serve as command and control centers and concealed launchers. With that, the terrorists still fired more than 120 rockets into Israel yesterday, including those aimed at Tel Aviv, the Dan region cities, Rishon Letzion, Ashdod, Ashkelon, Rechovot, Beit Shemesh, Lod, Ramle, Raanana, Herzliya and all of the towns near Gaza.