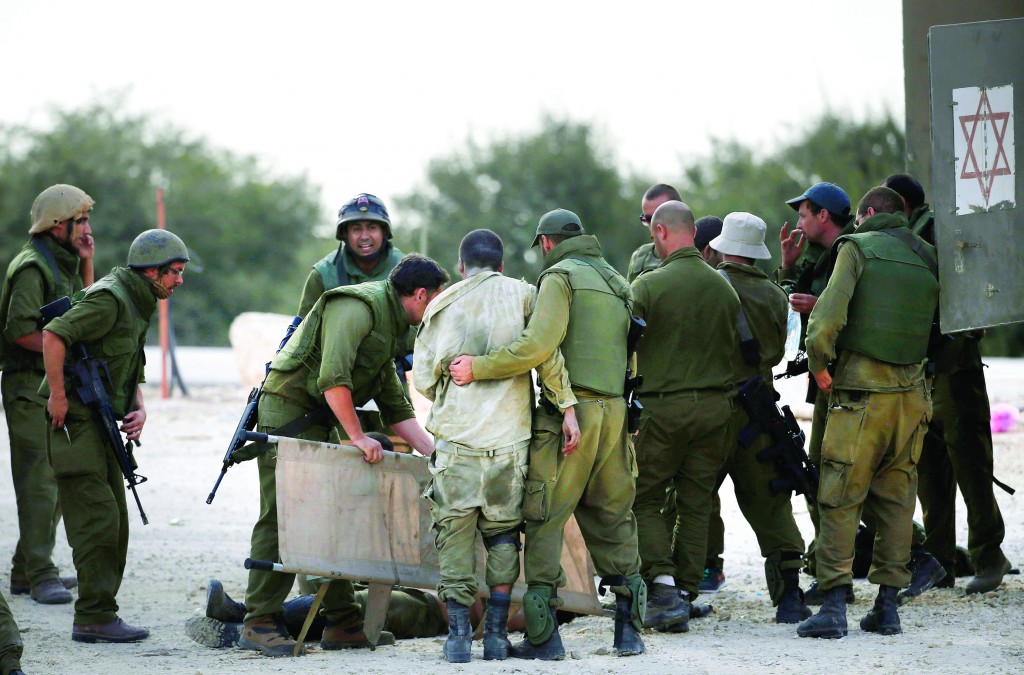 It was a difficult, bloody day in the Gaza Strip.

Thirteen IDF soldiers were killed, Hy”d, and more than 40 were wounded in various exchanges of fire throughout the last day in the Gaza Strip, bringing the total number of casualties since the ground operation began to 18. All the most recent casualties are from the Golani Brigade; the commander, a ranking general (res.), was moderately wounded as he led the soldiers in a clash with terrorists.

The news of the high number of dead soldiers was received with grief across the spectrum of Israeli society, as well as in the military and political echelons. With that, at a joint meeting of the security cabinet and the IDF brass that took place yesterday in the evening, it was decided unanimously that the “operation will continue until the goals are achieved.”

Prime Minister Binyamin Netanyahu, who delivered an address to the nation last night, said that the government and the army did not choose to enter this war, “but the moment it was imposed on us, we will carry it out until we achieve our goal of restoring quiet to the citizens of Israel for the long term, while significantly harming Hamas’ infrastructure. We are not deterred; we will continue as much as is necessary. This operation is vital for the security of Israel’s citizens.”

The first brutal battle took place on Motzoei Shabbos at 1 a.m., when an armored personnel carrier entered the Saajiya neighborhood, a densely packed area with thousands of civilians, but where the IDF discovered a tunnel between two homes that crossed the border to Israel. As they moved between the homes, the APC was hit by an RPG (rocket propelled grenade) or a bomb. Seven of the soldiers, all from the Golani unit, were killed. An exchange of fire then ensued between the terrorists who had laid the ambush for the APC and the rest of the unit’s soldiers who attacked the terrorists. Some were hit and others fled. There were five injured soldiers.

Around half an hour later, at about 1:30 a.m., there was a second clash of Golani soldiers with a terror cell in northern Gaza. A short-range battle ensued, during which several terrorists were killed. Due to an error, a hand grenade tossed by the IDF unit exploded near another Israeli unit, and one of the Golani soldiers was killed.

Battles raged throughout the night in the northern part of the Strip. At 5:45 a.m., terrorists attacked an IDF unit and two soldiers were killed.

A few minutes before 9 a.m., the final fatal clash for the day took place, when terrorists discovered that an army force had taken up positions in a rooftop apartment that looked out over one of the battle zones. They fired a missile that severely damaged the lookout point and set it afire. Three of the soldiers were killed and others were wounded, mostly from smoke inhalation.

Netanyahu revealed in his statement that, through the night, more and more tunnels were discovered, some of which led all the way into Israel. Hamas has spent years of work and a fortune of money on these tunnels to use them to conduct mass terror attacks and kidnappings. “We found handcuffs, sedatives, the like — there is no question, this is a strategic weapon that Hamas uses. They invested in the design, electricity, cables, communications, everything in order to be able to infiltrate and kidnap and kill.”

“Indeed, this was Hamas’ goal, and we are working against it. As I said, once this operation started against the tunnels, there is no guarantee of one hundred percent success, but we are doing everything possible to achieve the maximum, and I need to say that the results we have attained this far are beyond what we expected.”

“Hamas built two strategic networks in order to harm the State of Israel: the rocket network, and the tunnel network. The IDF has significantly harmed both of these. IDF operations, both offensive and defensive, neutralized the effectiveness of the rocket fire.”

In conclusion, Netanyahu said, “When we set out we knew, and I said it, that this can be a prolonged operation. B’ezras Hashem, we will do it and we will succeed.”

Hamodia’s correspondent emphasizes that during the last day and a half, the operation took a broad turn when large ground forces joined the activities to strike at terror targets in the strip, which began with the ground operation, and as the next step of Protective Edge.

Concurrently, ground efforts continue. At this point, the operation is focused and the objective is to harm the terror infrastructure in Gaza. Since the beginning of the operation, the IDF attacked 2,700 terror targets. More than 90 terrorists were killed in the past day and 24 were arrested. The forces discovered nearly 40 tunnel openings and 15 tunnels whose  length spans from Gaza into Israel.

But the focus of yesterday’s day was the high casualty count, with 13 fallen soldiers, Hy”d.

“The price that we are paying is, tragically, heavy. That is the painful price of war,” Defense Minister Moshe Yaalon said. “We are fighting against a murderous terror group that has set a target to kill us and we will not desist from the continued fighting. Hamas is paying a very heavy price and will continue to do so and we will continue to strike in the harshest manner. We will continue to kill Hamas terrorists, and those from other groups. We will continue to destroy tunnels, weapons, launching pads, missiles and rockets, weapons factories and government institutions.”

During the first two days of the ground operation, the IDF destroyed more than 10 terror tunnels built with the intention  of harming Israeli civilians and soldiers. In addition, the IDF targeted 145 terror positions throughout the Strip, including more than 30 rocket launchers that were hidden underground. It also continued the search for more tunnels.

Throughout the day, the IDF conducted controlled explosions on six terror tunnels exposed throughout the Strip in an effort to destroy infrastructure and remove the threat posed to Israeli civilians by these tunnels. Some of those tunnels were already deep into Israel territory and were ready to carry out complex terror attacks, Rachmana litzlan.

The IDF also conducted artillery and air attacks throughout the city of Saajiya in eastern Gaza, which is a locus of terror activity and where many missile factories are located. According to the Palestinians, there were more than 75 killed and 400 wounded in this neighborhood alone. Dozens of houses were destroyed or severely damaged. The Palestinians transmitted images of dozens of dead people in the street and pressured the Red Cross to call for a humanitarian-medical ceasefire, which would enable them to clear the casualties.

Indeed, after the Red Cross appealed to the Israeli government, it was decided to approve a temporary ceasefire in that city from 1:30 to 3:30 p.m. for urgent humanitarian activity. The population was called to move out of Saajaiya during that time and to cross the Salach A Din highway into Gaza City. Israel announced that any attempt to take advantage of the quiet to fire rockets would receive an immediate response.

Indeed, despite the ceasefire in that city, Hamas continued to fire rockets into Israel even during that time. Nevertheless, Israel agreed to extend the hiatus two more times, until 5 p.m. Only then, following continued rocket fire, did the IDF renew its fire into the neighborhood and other locations.

The IDF spokesman General Motty Almoz clarified that the decision to focus the strikes on terror sites in Saajaiya stems from the fact that since the beginning of Protective Edge, some 150 rockets have been fired from there, and under the neighborhood, there are more than 10 tunnels, some of which lead into Israel. In addition to the operations in Saajaiya, the Tufach neighborhood was concurrently targeted, as many rockets were fired from there throughout the days of fighting.

According to reports from the Gaza Strip, thousands of families fled the two neighborhoods, and there are signs that people are starting to flee from the center of the city, about 2 kilometers away. Some of those fleeing found refuge in the Shifa Hospital, and others fled further south to more suburban-like areas.