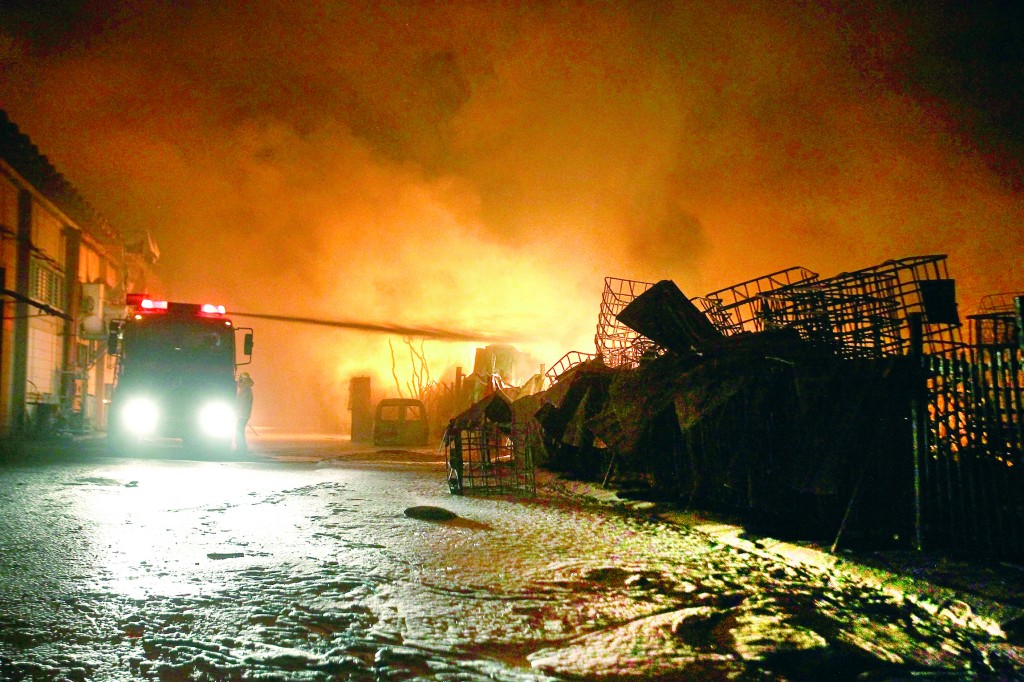 Israeli officials are reportedly contemplating an expansion of military operations in the south after rockets fired from the Hamas enclave on Motzoei Shabbos set a factory in Sderot on fire, injuring four people.

The Israel Air Force then struck a rocket launching terrorist cell in Gaza just before it was about to fire projectiles into Israel, the IDF said Sunday evening.

“Over the weekend, the Israel Defense Forces attacked multiple targets in response to firing at Israel from the Gaza Strip,” Prime Minister Binyamin Netanyahu said in public remarks to his cabinet.

“We are ready to expand this operation, if necessary,” he said.

Foreign Minister Avigdor Lieberman, speaking to the media on Sunday morning, suggested that the only way to effectively deal with recurrent rocket and other attacks from Gaza might be a retaking of the Hamas-controlled territory.

“We have to decide if we are heading to a scenario of re-taking full control of the strip,” Lieberman said in an interview with Army Radio. “We’ve seen that a limited operation just strengthens Hamas, so the alternative is clear. There is no scenario in between.”

The attacks represent a significant escalation in the southern region near Gaza. In addition to the rockets, mortar fire was directed by terrorists in Gaza into Israeli territory, and a large explosive device was detonated as an IDF patrol went by. B’chasdei Shamayim, there were no Israeli injuries in those incidents.

A rocket from Gaza hit the Sderot industrial zone on Motzoei Shabbos.

Employees at the factory escaped the blaze unharmed, except for four people who were injured. Magen David Adom paramedics treated the three before transferring them to Barzilai Medical Center in Ashkelon.

Yaron Shadadi was among the injured, not the first time for him. His home suffered a direct hit during Operation Pillar of Defense in November 2012.

“I live in the area,” Shadad told Ynet. “We were walking on the sidewalk a hundred yards from the factory, about half an hour after the rocket strike. Suddenly, there was an explosion in the factory and flames started rising. A fireball flew a distance of 600 feet from the plant into Sderot (and) there was a sudden heat wave, something terrible. The blast knocked me over and I was wounded on the hands and feet. I could feel I was burning in all the exposed parts of my body, and I have a terrible headache.”

Yoni Avraham heard a loud explosion, and ran to help. “I thought there were wounded, and I ran inside to try to help,” he said, from his hospital bed. “I went in to see if there were any people, pushing away children who had climbed up to see in. There were several small explosions and suddenly there was a crazy explosion that flung a gas cylinder into the air, burning my hands and neck.”

At least 10 firefighting teams rushed to the scene and brought the fire under control.

Later, at around 10 p.m., Palestinian terrorists in Gaza fired two more rockets at southern Israel. The projectiles triggered warning sirens, and exploded in open areas in the Sderot Negev region, and did not cause injuries or damage.

“To the defense minister, the prime minister, the education minister and also to minister Naftali Bennet, we are saying things clearly,” he said on Army Radio. “The answer to bringing back quiet to the south is an extensive military operation in the Gaza strip.”

The manager of the ruined Denber paint factory in Sderot told Army Radio that they had rebuilt the business in Sderot after a fire five years ago destroyed their facility in Ofakim.

“I hope somebody helps us because if not, we will not be able to get back on our feet,” he said.

Since the beginning of June, over 60 rockets have been launched from Gaza at Israel — more than four times the amount in May — and 28 of the rockets hit Israeli territory, the military said.