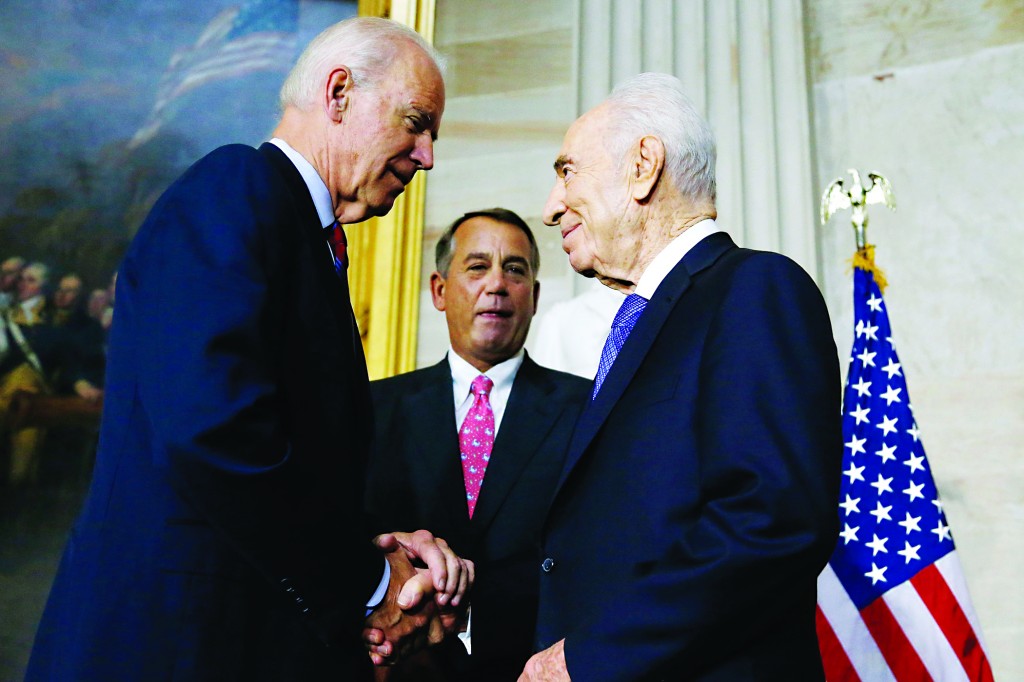 Israel’s President Shimon Peres gave his farewell speech to the U.S. Congress on Thursday, his valedictory on Mideast peacemaking, the U.S.-Israel alliance, a call for an end to terrorism and the return of three kidnapped Israeli teenagers.

In remarks given upon acceptance of the Congressional Gold Medal, the legislative body’s highest civilian honor, Peres lived up to his reputation as the region’s elder optimist, describing peace between Israel and the Palestinians as “the most possible impossibility.”

“The Arabs are not Israel’s enemies. The terrorists are the enemies of both of us,” Peres said. “Terrorists spread danger over the entire region. The region must come together to stop them.”

Speaking for the parents of the abducted boys, Peres said,  “Israel did and will do everything in our power to bring home our three kidnapped boys — Naftali, Gilad and Eyal.

“I met with their parents. They had one request. They asked me to speak here on their behalf. To make [their] voices heard all over the world to help bring our boys home. To sound a call across the world against terror.”

While hailing Palestinian Authority President Mahmoud Abbas’s condemnations of the kidnapping, he made it clear that the unity government with Hamas is an impediment to peace.

“You cannot put fire and water in the same glass,” Peres said. “Hamas fires rockets at our civilians. They oppose peace and support terror.”

Commenting on the current upheavals in the Mideast, Peres noted that “the artificial structure in the Middle East, built by previous empires, is now falling apart.”

“The rules governing the world are being rewritten. Security and prosperity are no longer mainly national issues,” he told the assembled members of Congress.

Introducing the Israeli leader, Vice-President Joe Biden was effusive in his praise, calling the 90-year-old Peres a “force of nature” and a “national treasure to the United States of America.”

President of Israel for one more month, the honors were poured on. Peres spent Wednesday and Thursday on a tour of Washington on his last official trip. He was greeted by no fewer than three Supreme Court justices, half of Congress, chief diplomats, cabinet members, national security staff and the president of the United States.