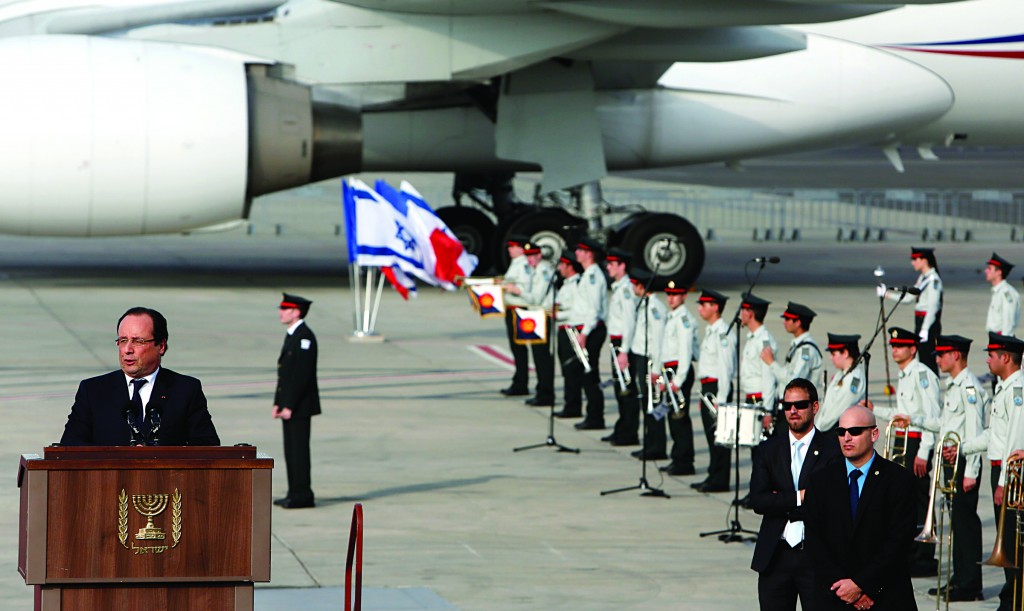 French President Francois Hollande assured Israel on Sunday that France would continue to oppose an easing of economic sanctions against Iran until it was convinced Tehran had ended a pursuit of nuclear weapons.

Hollande’s pledge, at the start of a three-day visit to Israel, could help underpin an intensive campaign by Prime Minister Binyamin Netanyahu to convince world powers to toughen terms of a proposed nuclear deal with Iran ahead of negotiations reconvening this week in Geneva.

“France will not give way on nuclear proliferation,” Hollande said at a welcoming ceremony at Tel Aviv airport. “So long as we are not certain that Iran has renounced nuclear arms, we will keep in place all our demands and sanctions.”

At the airport ceremony, attended by Netanyahu and Israeli President Shimon Peres, Hollande said France was taking Israel’s concerns into account, adding in Hebrew, “I will always remain a friend of Israel.”

Not everything Hollande had to say was aimed at pleasing Israelis and their leaders, however.

During a meeting with Peres on Sunday, Hollande urged more concessions from Israel. “Israel started releasing prisoners, but gestures are needed on the settlements issue as well,” Hollande said.

After Hollande’s three-day state visit, Netanyahu is scheduled to travel to Moscow on Wednesday to see Russian President Vladimir Putin.

“I hope that we will be able to persuade our friends during this week and in the days that follow to get a much better agreement [with Iran],” Netanyahu said in public remarks at the start of the weekly Cabinet meeting.

“John Kerry is an old friend of mine and is also a friend of Israel,” Netanyahu said, using a more conciliatory tone than at the end of an acrimonious visit by the top U.S. diplomat last week.

“I want to clarify that even among the best of friends there can be disagreements, certainly on matters that concern our future and our destiny,” the Israeli leader said.