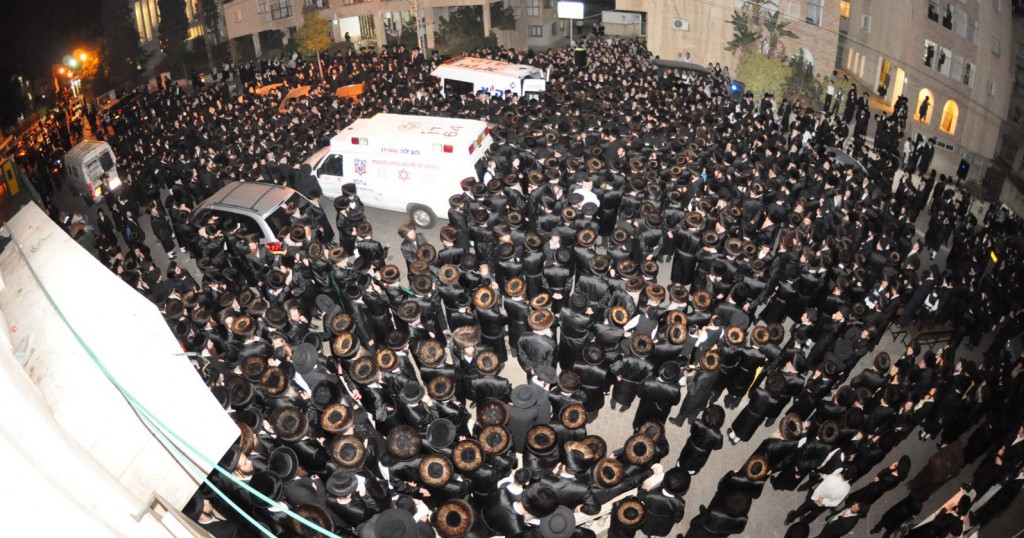 Thousands of mourners, headed by Rebbes and Rabbanim, attended the Motzoei Shabbos levayah of Rebbetzin Chana Rokeach, a”h, the Rebbetzin of the previous Belzer Rebbe, Harav Aharon, zy”a. She passed away in Bnei Brak’s Maayanei Hayeshua Medical Center at the end of Shabbos at age 98.

The Rebbetzin was born in Hungary in 1915. Her parents, Harav Yechiel Chaim Labin, the Makava Rebbe, zt”l, and his wife, Rebbetzin Bracha Devora Labin, a”h, were descendants of the Rebbes of Belz, Ziditchov and Spinka.

Rebbetzin Chana married Harav Yosef Meir Pollack of Beregszasz, who was orphaned as a bachur. (After his father, Harav Chaim Avraham, zt”l, was niftar; his uncle, the Chakal Yitzchak of Spinka, zy”a, undertook to find a shidduch for him. Knowing that his nephew would be a Rebbe and would take the place of his late father, the Spinka Rebbe was very careful to search for a kallah who would be a suitable Rebbetzin.)

After their chasunah, the couple settled in Beregszasz (then part of Czechoslovakia), on the Hungarian border, where Harav Yosef Meir was accepted by his father’s chassidim as the Beregszasz Rebbe. He opened the large Beregszasz yeshivah, which attracted elite bachurim from Czechoslovakia and Hungary.

Harav Yosef Meir was a staunch follower of Harav Aharon Roth of Beregszasz, zy”a, the author of sefer Shomrei Emunim.

During World War II, the Nazis caught Harav Yosef Meir without an identity card and murdered him on the spot. His young widow was left with two children, the oldest just five years old.

Rebbetzin Chana had a Hungarian passport, and she fled with her children across the border to her hometown, Makava, in Hungary. But her escape was short-lived. When the Germans arrived in Makava, Rebbetzin Chana and her family were put on a train to the death camps; her son was put on another train traveling in the same direction. Despite the careful surveillance of the satanic Nazi guards, the young boy managed to jump onto the train with the rest of the family, an act that saved his life.

The Nazis soon received the message that Auschwitz was full and could no longer take any more prisoners. The train was turned back to Makava and its passengers, including Rebbetzin Chana and her two children, were saved.

Throughout that dark period of nisyonos, the Rebbetzin held close to her heart the three mussar sefarim she continuously studied — Shevet Mussar, Kav Hayashar and Menoras Hamaor, taking them with her wherever she went. The Rebbetzin strengthened herself with her emunah and was even able to influence another family and be mekarev them.

In Iyar 5707/1947, the Rebbetzin left on a ship to Eretz Yisrael, arriving in Haifa after Shavuos. A group of her late husband’s chassidim, also Holocaust survivors, were waiting for the family, and an emotional reunion took place.

The young widow traveled with her children to Yerushalayim, to the abode of her father, the Makava Rebbe, who had arrived earlier in Eretz Yisrael. Her two sisters, Rebbetzin Lieberman and Rebbetzin Klein, also survived the war and they were all reunited in Eretz Yisrael.

Two years later, Rebbetzin Chana married Harav Aharon of Belz, zy”a, who miraculously escaped Nazi Europe, where he lost his first wife and all his children and grandchildren.

The Rebbe expressed his delight with the shidduch, noting that his kallah was a descendant of the Sar Shalom of Belz and the Rebbes of Ziditchov, zy”a.

As the Belzer Rebbetzin, she was totally devoted to serving the Rebbe, which was not an easy task. The Rebbe hardly slept, and he was involved in his avodah for most hours of the day.

Not meriting children from this marriage, the Rebbe treated her two children as his own, personally caring for their chinuch and all their needs. The Rebbe was mesader kiddushin at her son’s chasunah, something he rarely did. When this son entered Yeshivas Chachmei Lublin in Bnei Brak, the Rebbe, who was already very frail, asked his brother, the Bilgorayer Rav, zt”l, to take his place in accompanying the bachur to yeshivah, and also asked him to apologize to the Rosh Yeshivah, Harav Shmuel Wosner, for not coming personally.

Before his petirah in 5717/1957, the Rebbe uttered rare words about the unique zechus of the Rebbetzin, adding that he had rachmanus on her and wondered how she would cope.

Indeed, the Rebbetzin took the Rebbe’s petirah very hard. During the shivah, she dreamt that she saw the Rebbe dancing in Heaven with other tzaddikim, and when she asked the Vayechi Yosef of Pupa, zt”l, the meaning of the dream, he said Chazal tell us that in Heaven, the neshamos of the tzaddikim dance together.

“Since you took his petirah so much to heart, you merited to be shown this dance in order to comfort you,” the Pupa Rav explained.

The Rebbetzin lived for many years  on Rechov Agripas in Yerushalayim, where the Belzer Yeshivah was located.

Every Shabbos, the elderly chassidim would make Kiddush in the Rebbetzin’s home, and she would shower them with her brachos. She would daven for others, reciting Tehillim on their behalf, and many credited her tefillos with bringing yeshuos.

The Pshevorsker Rebbe, Reb Itzikel, zy”a, visited her when he came to Eretz Yisrael, telling his chassidim that she could take and read kvitlach like the tzaddikim. And when she visited the previous Klausenburger Rebbe, zy”a, he stood up in her honor despite his weakness.

When the Belzer beis medrash was relocated to Kiryat Belz 18 years ago, the Rebbetzin moved to Rechov Harav Meltzer in Bnei Brak to be near her grandchildren. Later, her grandson Harav Yisrael Leifer and his family moved into her home and cared for her.

The Rebbetzin experienced many sorrows in her life. Her only daughter, Rebbetzin Bayla Chaya Mendelsohn, a”h, passed away 21 years ago after a long illness, on the day of the yahrtzeit of her stepfather, the Belzer Rebbe; her grandson, Harav Yehoshua Pollack, the Kolbesover Rebbe, zt”l, was niftar eight years ago at the age of 50; and seven months later her son, the Beregszaszer Rebbe, was niftar.

Yet despite the hardships, the Rebbetzin strengthened herself and all those around her with her emunah and bitachon.

The Friday after the petirah of her only son, when the wound was still so terribly raw, the Rebbetzin went to light Shabbos candles. After lighting, with a wave of her hand, she declared: “Shabbos!” Throughout Shabbos she maintained an atmosphere of simchah and kedushah; only after Havdalah did she return to her mourning and grief.

Two years ago, her son-in-law, Harav Mendelsohn, was niftar, but the Rebbetzin wasn’t informed of the petirah because of her failing health. Only later, when she was shown her new grandson and was told that his name was Menachem Mendel, did she grasp what had happened, and she expressed her grief.

Recently, she was hospitalized in Bnei Brak’s Maayanei Hayeshua Medical Center. On Shabbos her condition worsened. About 50 family members stood around her bed and recited zemiros Shabbos, Pesukei Yichud Hashem and Krias Shema, after which her neshamah departed.

The Rebbetzin was carried to her final resting place on the same stretcher that had been used to carry her husband; she had purchased it from Shaare Zedek Hospital after his levayah and stored it in her son’s Petach Tikvah home.

The levayah began Motzoei Shabbos at the Belzer Talmud Torah at 63 Rechov Achad Ha’am in Tel Aviv. This had formerly been the abode and beis medrash of the Belzer Rebbe, where she had lived and so devotedly served the Rebbe. There she was eulogized by her grandson, the Beregszasz Rebbe of Beit Shemesh, who said that after the petirah of the Belzer Rebbe, the Tchebiner Rav commented that the Rebbetzin fulfilled her role as an eishes chaver in the best possible way. After the hesped, Kaddish was recited by her grandchildren.

The levayah proceeded to her home on Rechov Meltzer in Bnei Brak, where there was a large crowd. The Machnovka Rebbe, who had walked every Shabbos to visit the Rebbetzin at her home, delivered a hesped, followed by her mechutan Harav Chaim Zvi Shapira, Rav of K’hal Chassidim, her grandson the Beregszasz Rebbe of Bnei Brak, and the Komemiyus Rav, Harav Moshe Mendelsohn.

From Bnei Brak, the levayah continued to Yerushalayim, where another large crowd awaited the mittah at the large beis medrash in Kiryat Belz. The Belzer Rebbe was at the head of the throng that accompanied the mittah to its final resting place on Har Hamenuchos, near the tziyun of Rebbetzin Chana’s husband, Harav Aharon of Belz.