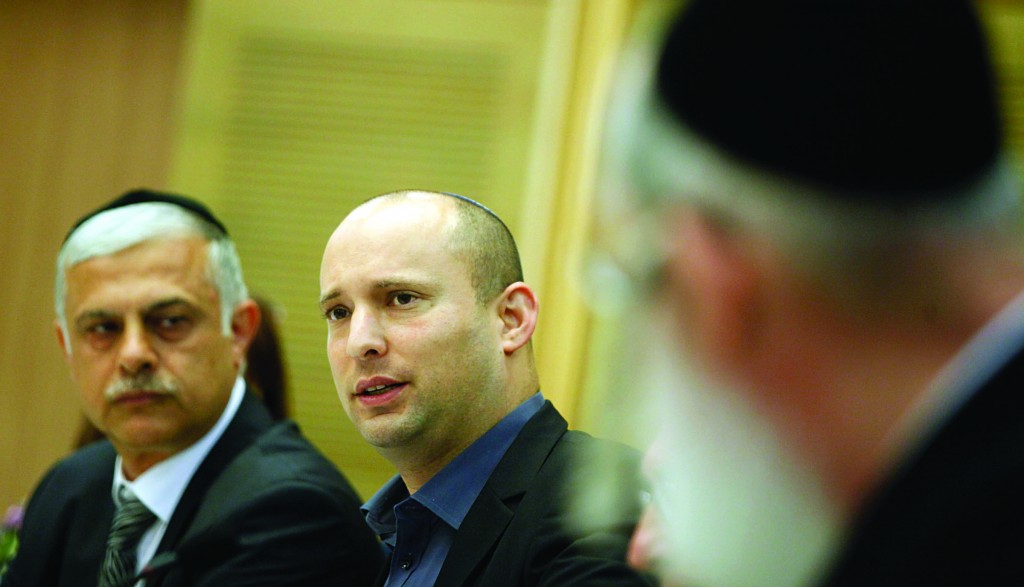 As the Shaked Committee to review the chareidi military draft bill convened this week, Economy and Trade Minister Naftali Bennett’s office presented a half billion shekel plan to move students out of the yeshivos and into the IDF and the workforce.

The 15-page report, entitled “Emptying the Pool,” made clear the government’s view that a broad campaign of incentives and sanctions will be required to effect the assimilation of chareidim into Israeli society.

The title, “Emptying the Pool,” derives from Israeli slang, and roughly translated means draining the yeshivos of the water that keeps the fish in the pool. In other words, instead of catching the fish swimming in the pond, by emptying it of its water, the fish will be easy to get.

In the same vein, secular officials claim that by drying out the pool (the yeshivos and kollelim) from the advantages that they say are keeping the chareidim at their shtenders, it will be easy to integrate them into the secular social mainstream. In other words, it was the latest volley in the ever-intensifying culture war waged against the Torah community in Israel.

The first session of the hearing dealt with chareidi integration in the work force. Economy and Trade Minister Naftali Bennett (Jewish Home) said during the session that the goal of integrating chareidim into the workforce was more important than the issue of military service.

Bennett said the program will include the establishment of employment guidance centers for chareidim, promoting demand among employers for chareidi employees by providing financial incentives, and providing professional training for chareidi individuals.

When the discussion turned to military recruitment, MK Rabbi Moshe Gafni (UTJ) declared to the coalition MKs that the committee “is not a rubber stamp” on the government’s plans for military recruitment and sanctions, and that the text of the bill that passed its first reading in the plenum is no more than the “raw material” for a new draft law.

“The law,” he said, “will look very different in its final form,” and it is impossible to decree upon an entire segment of the population something it cannot live with.

In response to charges raised by the IDF representative on the committee, Brig. Gen. Gadi Agmon, that many chareidim who are not studying are falsely listed as attending yeshivos, Rabbi Gafni agreed, as did other chareidi MKs in attendance, that anyone who is not pursuing full-time Torah studies should not be entitled to an exemption from military or civilian service. It was one of the few items that could be agreed upon during an acrimonious session.

MK Ariel Attias (Shas) stated that the average chareidi respects Israeli soldiers. “The problem begins when you attempt to force us to change our way of life,” he said.

The Shaked Committee has not yet begun examining specific clauses of the proposed legislation, but will start doing so in a hearing next week.