Kerry’s Back, But Peace Not at Hand

Secretary of State John Kerry held separate talks with Israeli and Palestinian officials on Thursday and acknowledged there was considerable skepticism that the two sides would resume peace negotiations.

There were no signs of any breakthrough as Kerry visited Israel for the fourth time in his four months in office to try to revive a peace process that has been moribund for more than two years.

“I know this region well enough to know that there is skepticism. In some quarters there is cynicism and there are reasons for it. There have been bitter years of disappointment,” Kerry said as he and Israeli Prime Minister Binyamin Netanyahu posed for pictures.

“It is our hope that by being methodical, careful, patient, but detailed and tenacious, we can lay out a path ahead that can conceivably surprise people but certainly exhaust the possibilities of peace.”

Kerry praised Netanyahu for the “seriousness” with which he is searching for ways to revitalize peace hopes.

Kerry met Palestinian  Authority President Mahmoud Abbas for lunch in Ramallah and was to return to Yerushalayim to see Israeli President Shimon Peres and have breakfast on Friday with Netanyahu.

Before their meeting on Thursday morning, Netanyahu said he wanted to restart peace talks. “It’s something I hope the Palestinians want as well and we ought to be successful for a simple reason — when there’s a will, we’ll find a way,” Netanyahu said.

The two men discussed ways to advance peace, Kerry’s ideas for an economic plan to boost Palestinian growth and the “escalating violence” in neighboring Syria’s civil war, a senior State Department official told reporters after the meeting, which lasted about two hours.

Israel’s chief negotiator with the Palestinians, Justice Minister Tzipi Livni, said, “The objective is to restart the negotiations and to end the conflict. I hope the Palestinians understand this.

“The next days and weeks are critical. It is important to stay focused,” she added.

A senior Israeli official told The New York Times that Kerry had gone beyond listening and was discussing specific ideas about restarting negotiations.

“Are we there yet? I’m afraid not,” the official said, “but we might be very close.”

Not so close, if Palestinian comments are any indication.

Despite a statement from Palestinian Authority negotiator Saeb Erekat earlier in the week that suggested the PA was ready to put aside its preconditions,  President Abbas on Thursday reiterated his demand for a full cessation of construction in Yehudah and Shomron and the release of Palestinian prisoners before resuming talks with Israel.

Kerry held a closed one-hour meeting with Abbas, after which, in a departure from American diplomats’ usual practice of keeping a safe distance from the Arab street, he visited the cities of Ramallah and al-Bireh, where he sampled shawarma and pastries.

Nevertheless, Palestinian spokesmen are saying there has been little progress ahead of what they believe to be a June 7 deadline for action. They are already beginning work on a “day-after” strategy.

“We don’t have unrealistic expectations. We know the immensity of obstacles,” said Hanan Ashrawi, a senior Palestinian official. “If it doesn’t work, of course we have our own plans.” 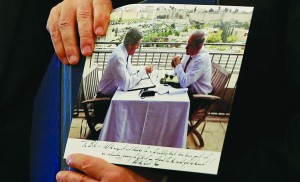 This article appeared in print on page 6 of the May 24th, 2013 edition of Hamodia.