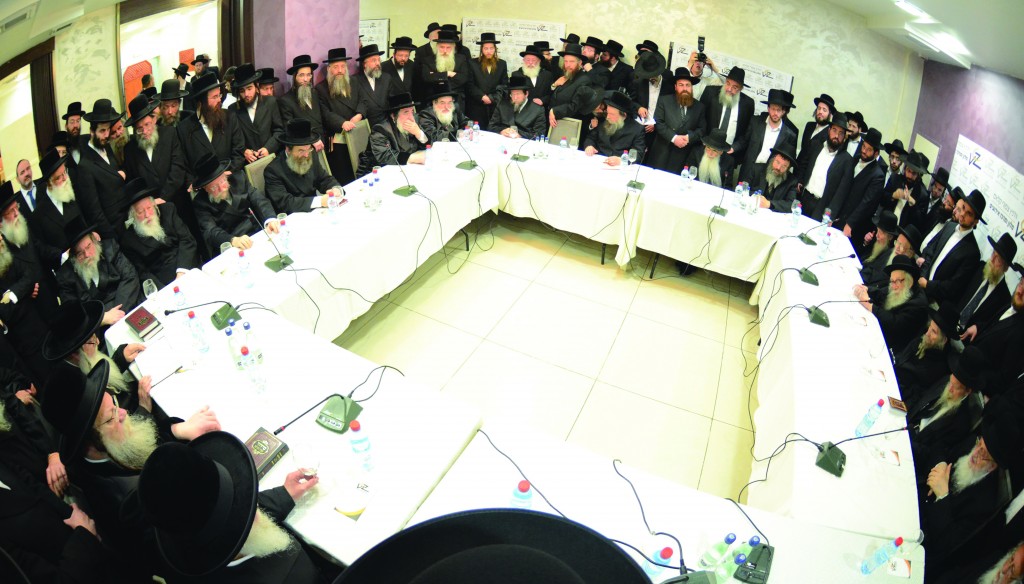 Gedolei Yisrael, shlita, convened for a special session on Thursday evening to formulate a joint approach to the impending decrees that threaten the yeshivah world in Eretz Yisrael in the form of a mandatory draft for talmidei yeshivah.

Resolutions drafted at the  conclusion of a joint session of the Moetzes Gedolei HaTorah of Agudas Yisrael and Degel HaTorah called for a determined, uncompromising stance against the yeshivah draft.

The Seret-Vizhnitzer Rebbe, shlita, was unable to attend due to his weak state, and sent a letter of brachah.

Hagaon Harav Aharon Leib Steinman tearfully quoted the famous words of Rav Saadiah Gaon that our nation is not a nation except for its Torah; the entire existence of Am Yisrael is only through the Torah, and without Torah there is no Am Yisrael.

“Throughout the generations we have had to fight to survive and, baruch Hashem, in our generation and in recent times, Torah learning has grown, the number of talmidei chachamim has grown, and they are writing good sefarim in halachah and Aggadah, and Hashem will help that they should be able to do so until the Geulah.

“And from here we ask and plead with the government not to make it difficult for us, because learning Torah is the purpose of Klal Yisrael. May Hashem help that we should be able to continue to do so until the Geulah, speedily in our day,” Harav Steinman said.

The Belzer Rebbe said, “We must declare that Torah scholars will not be drafted, and if, chalilah, they will be forcibly conscripted, all of us, all of the Rebbes and Rabbanim sitting here, will go to prison in their stead.”

The Vizhnitzer Rebbe, Harav Yisrael Hager, quoted the parashah, which says, “When you buy a Jewish slave … in the seventh year he will go free.” The seventh year refers to the talmid chacham, who is compared to Shabbos. He has to be free of the burden of malchus and derech eretz. Thus, anyone who accepts upon himself the ol Malchus Shamayim is relieved of the ol derech eretz.

“Even if they come to us with the threat of cutting off funding to the Torah world, we will not capitulate to their dictates.”

Bnei Brak Mayor Rabbi Avraham Rubinstein brought a message from Harav Shmuel Auerbach, shlita, who is still recovering from his recent surgery and therefore did not attend in person:

“It is incumbent upon us at this time to firmly and strongly stand up for the soul of Am Yisrael — the principles of religion, as the yeshivos and kollelim are under threat, and [they want] to put yirei Shamayim under the influence of those who are porek ol. We must not negotiate on the issue, and there is no place for discussion. Chalilah that they should come and decide who is worthy [of remaining in learning] and who is not.

“It is incumbent upon us to make sure that there should be no change in the Torah world, and as long as this is not taken care of, they should not take the risk and go at all [to the draft offices].”

At the end of the session, the Moetzes announced a series of resolutions for the preservation of the Torah world (see box below). This was preceded by an expression of deep distress in light of the ugly wave of incitement against chareidim and the Torah community, in whose merit the world exists.

The Moetzes secretary, Harav Mordechai Stern, a Dayan on the Badatz Zichron Meir in Bnei Brak, read the resolutions of the Moetzes, chief among them the declaration that there must be no compromises regarding the yeshivah draft.

The news of the reconvening of the Moetzes Gedolei HaTorah of Agudas Yisrael was met with great excitement by the chareidi community. Submission to daas Gedolei Yisrael is the secret of the existence and success of chareidi Jewry and their battles for kevod Shamayim.

The Moetzes Gedolei HaTorah is alarmed and fearful, and expresses deep distress at the wave of ugly incitement flooding the residents of Eretz Yisrael against chareidim in general and those who learn Torah in particular, the yeshivah students in whose merit the world exists. They learn day and night and make great strides in their yiras Shamayim, kedushah and taharah, and there are now efforts to change their status and disrupt their learning.

We turn to acheinu Beis Yisrael with a passionate plea: Please do not fear, because the purpose of the existence of Am Yisrael throughout the generations has been only to learn Torah and keep mitzvos in purity, and only through that will the true character of Am Yisrael be preserved. Now is a time to increase and add from chol to kodesh.

The Moetzes Gedolei HaTorah expresses its satisfaction at the success of chareidi Jewry in uniting for the sake of strengthening religion, and appreciates the efforts made by the UTJ askanim and the general public who answered the krias kodesh and worked to increase kevod haTorah.

All of Klal Yisrael turns its eyes Heavenward in sincere tefillah to Hashem to speed the arrival of the Geulah and with the hope that ohr chadash al Tzion ta’ir and v’hayah Hashem l’Melech al kol haaretz.